"It is unfortunate that the event could not proceed as planned," UC Davis said. Despite the violence, police did not intervene. 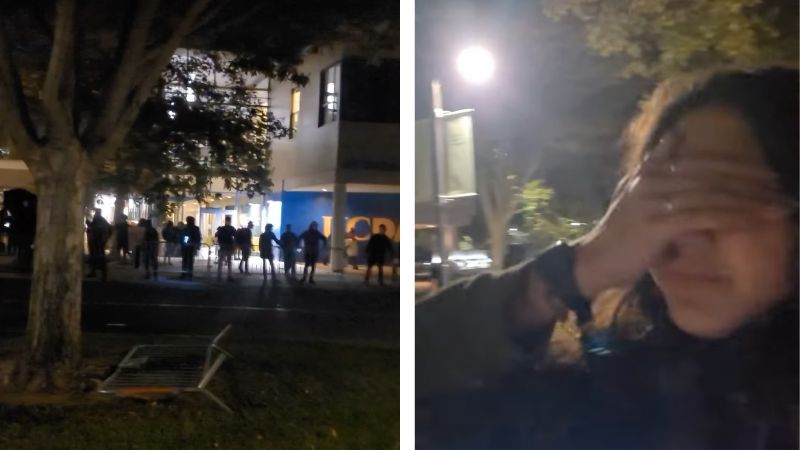 On Tuesday evening, a female student was maced and her phone damaged by protesters that gathered outside a student-organized Turning Point USA event at the University of California, Davis. Video from The Prudent Patriot on YouTube captured outside the venue, a woman was seen gasping and grabbing her eyes, maced in the face along with other attendees of the event. Her phone was also destroyed.

In the background, protestors were heard yelling "f*ck all fascists." According to Fox News, the event, which was set to feature Turning Point USA contributor and podcaster Stephen Davis, was canceled over student safety concerns.

Turning Point USA said in a statement to The Post Millennial, "Once again, outside 'protestors' with zero connection to our organization or students used violence to disrupt our campus free speech event."

"Reports from our field team indicate that the conflict began when Antifa showed up and provoked attendees entering the venue. As an official school affiliated club, TPUSA regularly hosts outside speakers, working in advance with administrators and campus police to ensure a safe environment for everyone involved.

"Sadly, on this occasion, the bad guys won and rather than risk any further escalation of violence, our chapter leadership decided to cancel the event when it became apparent campus PD was unable to disperse the violent agitators outside while also keeping our students safe inside. This is a great loss for free speech, our speaker Stephen Davis, and for the students at UC Davis. TPUSA condemns all violence and refuses to be cowed by those who use threats and intimidation to stop conservatives on campus," the statement concluded.

In an advertisement for the event, it stated that Davis, "aka MAGA Hulk… will be discussing what it’s like to be on the front lines of both political and cultural issues."

UC Davis said in a statement that around "100 protesters and counterprotesters — including some who, according to reports, wore apparel labeled Proud Boys — fought among themselves, used pepper spray, knocked over barricades and removed traffic cones."

Protesters had also reportedly used barricades to beat on the glass of the campus’ Conference Center, where around 30 people had gathered to wait for the beginning of the event.

Despite the violence, police did not intervene.

"UC Davis police were not deployed. No UC Davis staff used pepper spray. UC Davis Student Affairs staff and civilian security were inside and outside the event," the statement continued.

"The students who organized the event agreed to cancel the remarks out of concern for safety. Staff from Student Affairs on-site agreed that there was grave danger should the event continue," UC Davis said.

The university continued on to say, "It is unfortunate that the event could not proceed as planned. As a public institution, UC Davis values and supports freedom of expression as rights guaranteed to every citizen. When the students agreed to cancel the event, UC Davis Student Affairs staff successfully evacuated the students and speaker from the building."

UC Davis’ statement said that in preparation for Tuesday evening’s event, "we worked with the students to create a secure environment, including a safety plan, where freedom of speech could be exercised, including for those wishing to protest the speaker."

Chapter members who witnessed the attack could not confirm the presence of the Proud Boys, despite the UC David statement. The Post Millennial could not confirm their precense either, and has not seen any photo or video proof they were present. TPUSA said in official statement obtained by The Post Millennial that those outside the venue shared zero affiliation with the group.

Leading up to the event, it was revealed that all of the flyers for the event were ripped down on campus, being replaced by "community alert" flyers.


"Turning Point USA is a Koch-funded far-right student group active in Davis and around the country," the flyer read. "They claim to be in favor of freedom and limited government, but this is a front for their notoriously racist, homophobic, transphobic, and anti-immigrant activities."

"We call on anyone who opposes racism and bigotry to stand together and make it known that TPUSA is not welcome on our campus," the flyer concluded.