Doctors in the National Health Service (NHS) of England are receiving training about "gender unicorns" and learning about gender identities such as neutrois, polygender, and genderf*ck. 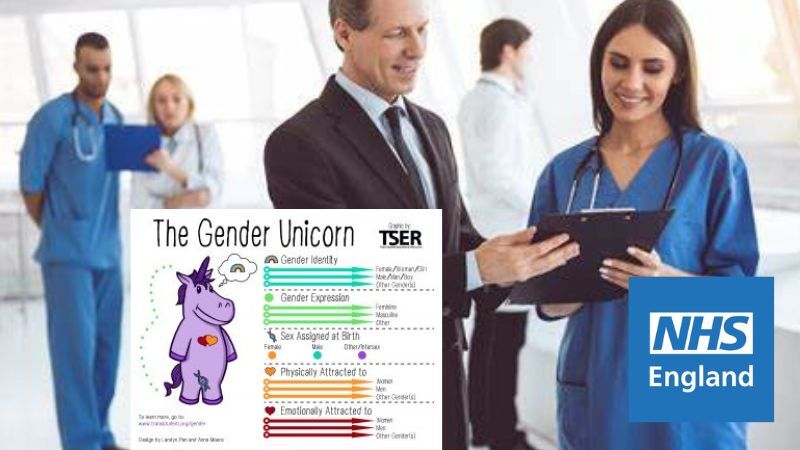 Doctors in the National Health Service (NHS) of England are receiving training about "gender unicorns" and learning about gender identities such as neutrois, polygender, and genderf*ck," The Telegraph has revealed.

In the two-hour training session leaked to The Telegraph, doctors were shown the Gender Unicorn, a visual with sliding scales depicting male/female and man/woman as "gender identities," which also uses the thoroughly unscientific termininolgy "sex assigned at birth."


The visual, which is also used in classrooms all over the US and Canada as a means to teach young children about gender, also separates physical attraction from emotional attraction. This is done because the modern trans rights movement has redefined sexual orientation to "gender orientation," largely for the benefit of heterosexual males who identify as women and believe themselves to be lesbians.

According to The Telegraph, later in the training sessions, doctors were given 11 examples of different gender expressions, including non-binary, polygender, demigender, androgyne, and "genderf*ck," which the shocked group of assembled medical professionals was told means "when people don't give a f*ck about gender."

But the training session didn't quite achieve the aim it set out to accomplish.

The Telegraph quotes one doctor who was in attendance as saying it "opened my eyes to how ridiculous this whole thing is."

"It seemed that they were almost an apostate for the trans movement and they were very proud of the fact they had 3,800 people on the [gender clinic] waiting list," the anonymous doctor told The Telegraph.

"They went down a list of gender identities and talked about genderf*ck," continued the doctor. "People in the audience were smirking, they felt a bit uncomfortable. It was almost Alan Partridge-esque. Why did we need to be exposed to that language?"

The anonymous medic went on to explain that approximately 50 percent of the members of that particular NHS trust are "gender-critical" so they were not going to fall for such training because they are not "wet behind the ears," but expressed concern that some other trusts, which don't have as many gender-critical members, could be more influenced by sessions such as this one.

The timing of this training session, which reportedly took place two weeks ago, is surprising given that the gender services provided by the NHS have been under such intense scrutiny of late.

An independent review of the youth gender services at the soon-to-be-closed Tavistock clinic found that the clinic was not a safe or viable option for young people, in part because it had allowed ideology such as that displayed in this training session to guide the treatment protocol, rather than basing it on sound evidence.
ADVERTISEMENT
ADVERTISEMENT
Gender Unicorn NHS