In an hourlong phone call on Saturday, President Donald Trump grilled Georgia's secretary of state on allegations of voter fraud. 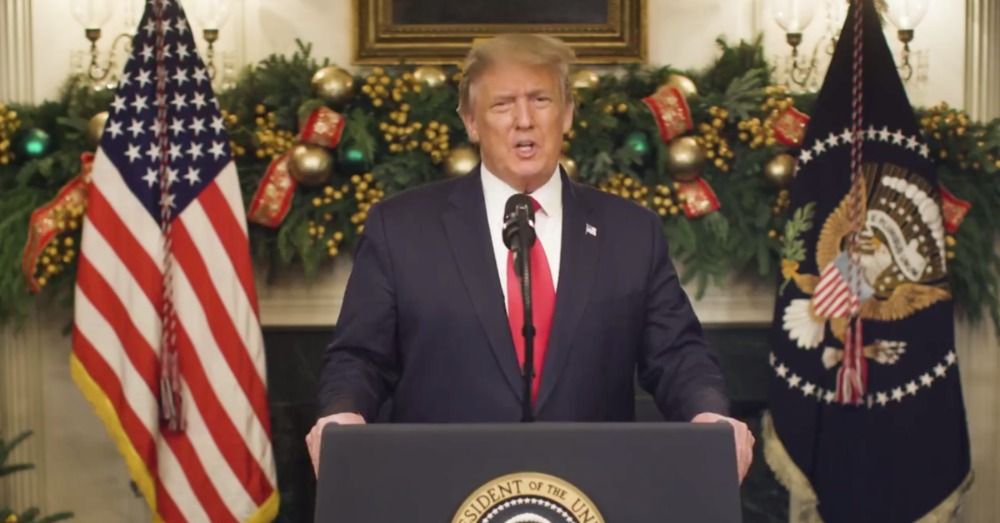 In an almost hour long phone call on Saturday, President Donald Trump grilled Georgia's secretary of state on allegations of voter fraud. The Washington Post originally obtained the hour long recording, but only posted edited excerpts of the call which totalled just over four minutes of audio.

On the call the President can be heard discussing with Georgia’s Republican Secretary of State Brad Raffensperger the various allegations of voter fraud in the Peach State.

Among the people on the call were Raffensperger, White House Chief of Staff Mark Meadows, several aides and attorneys. At one point Meadows urged Georgia officials, “in the spirit of cooperation and compromise” to find a path forward that doesn’t involve the court system.

During the call, Trump laid out numerous examples of ballot irregularities and anomalies including double voting and deceased people voting.

The Washington Post and other outlets that shared the original story used only snippets of the conversation to report on the conversation. These outlets alleged that his talk with Raffensperger Trump "...repeatedly urged him to alter the outcome of the presidential vote in the state."

The complete audio and transcript was released hours after the edited audio went viral and belies the original claim that the President tried to manipulate the outcome of the Georgia election. The full conversation can be heard and read here.

The president has argued with Raffensperger and other Republicans for weeks, blaming them for his narrow election defeat in Georgia. Raffensperger and his office's general counsel, Ryan Germany, pushed back on the claims and said President-elect Joe Biden's victory of more than 12,700 votes was accurate.

Instead, Trump made his case for how close the election was and possible election interference. "You don't need much of a number because the number that in theory I lost by, the margin would be 11,779. But you also have a substantial numbers of people, thousands and thousands, who went to the voting place on November 3, were told they couldn't vote, were told they couldn't vote because a ballot had been put on their name."

The President continued, "We had, I believe it's about 4,502 voters who voted but who weren't on the voter registration list, so it's 4,502 who voted, but they weren't on the voter registration roll, which they had to be. You had 18,325 vacant address voters. The address was vacant, and they're not allowed to be counted. That's 18,325. Smaller number, you had 904 who only voted where they had just a PO, a post office box number, and they had a post office box number, and that's not allowed."

The President also questioned Raffensperger about ballots that were allegedly "shredded" and others that were counted when there were no poll watchers in Fulton County. Some names of other parties names in the allegations were hidden on the audio and transcript. "We had at least 18,000, that's on tape, we had them counted very painstakingly, 18,000 voters having to do with [name]. She's a vote scammer, a professional vote scammer and hustler [name]. That was the (Fulton County) tape that's been shown all over the world that makes everybody look bad, you, me and everybody else."

Trump then expanded on the "water main break" excuse that was used to clear people from the area before the alleged fraud occurred that was circulated widely on a video recording of the polling station. "...number one they said very clearly and it's been reported that they said there was a major water main break. Everybody fled the area. And then they came back, [name] and her daughter and a few people. There were no Republican poll watchers. Actually, there were no Democrat poll watchers, I guess they were them."

The President continued, "But there were no Democrats, either, and there was no law enforcement. Late in the morning, early in the morning, they went to the table with the black robe and the black shield, and they pulled out the votes. Those votes were put there a number of hours before, the table was put there, I think it was, Brad, you would know, it was probably eight hours or seven hours before, and then it was stuffed with votes. They weren't in an official voter box; they were in what looked to be suitcases or trunks, suitcases, but they weren't in voter boxes."

Trump concluded his point, "The minimum number it could be because we watched it, and they watched it certified in slow motion instant replay if you can believe it, but slow motion, and it was magnified many times over, and the minimum it was 18,000 ballots, all for Biden."

A good portion of the conversation was spent discussing military ballots and signature verification. Many of the military ballots went to Biden, when traditionally they go to the Republican candidate and President Trump has overwhelming approval numbers in the armed forces.

The only explanation for inconsistency was provided was by Raffensperger's Attorney Ryan Germany. "I don't know about that. I do know that we have, when military ballots come in, it's not just military, it's also military and overseas citizens. The military part of that does generally go Republican. The overseas citizen part of it generally goes very Democrat. This was a mix of 'em."

The President alleged throughout the conversation that overcoming the roughly 12,000 vote difference between him and Biden was easy when you factored in the multiple alleged incidents of fraud. The President claimed there were 4,925 out of state ballots, 2,326 ballots sent to vacant addresses and drop boxes that were picked up on time but did not arrive for counting until days after the election.

"So there were many infractions, and the bottom line is, many, many times the 11,779 margin that they said we lost by—we had vast, I mean the state is in turmoil over this."

Following the various allegations was when Trump urged Georgia officials to 'recalculate' the vote as alleged by the Washington Post. “We won this election in Georgia based on all of this. There’s nothing wrong with saying that, Brad. The people of Georgia are angry and these numbers are going to be repeated on Monday night,” Trump said, adding: “There’s nothing wrong with saying that you’ve recalculated.”

The President also made the point that the outcome of the presidential election is linked to the hotly contested Senate runoff election and if Republican Senators Kelly Loeffler and David Perdue would be able to hold their seats.

Trump's legal team, headed by his attorney Rudy Giuliani, have attempted to block the certification of the 2020 election results through the legal system, but courts at every level have dismissed the challenges from Trump’s campaign.

A number of congressional Republicans have stated their intention to challenge the results of the election on Wednesday. A group of GOP senators led by Sen. Ted Cruz (R-TX), said they would object to the certification unless there was an emergency 10-day audit of the results by an electoral commission. Sen. Josh Hawley (R-MO), said he would object to, at least, the results in Pennsylvania. More than 100 GOP House members will reportedly also object to the election results in Arizona, Georgia, Michigan, Pennsylvania, Nevada and Wisconsin.

The full audio and transcript of President Trumps call with Georgia's officials can be heard and read here.