Videos of the incident circulating online show a masked individual rush through the University of British Columbia auditorium and strike at an innocent bystander. A fire alarm can be heard in the background before the suspect is seen on the ground being apprehended by the police. 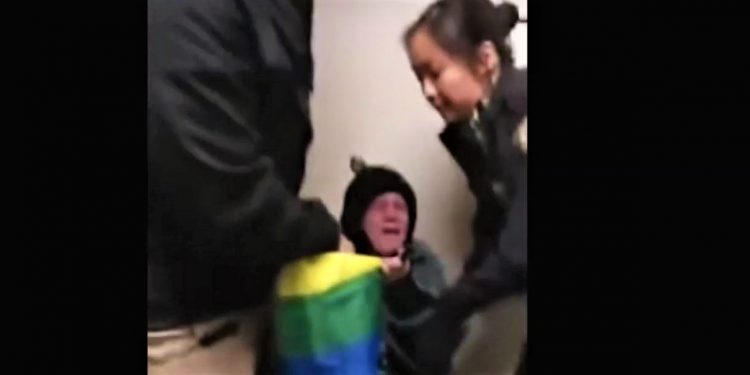 A talk by transgender ideology critic Jenn Smith erupted into violence after an Antifa member allegedly assaulted somebody in the audience before being arrested by the police.

Videos of the incident circulating online show a masked individual rush through the University of British Columbia auditorium and strike at an innocent bystander. A fire alarm can be heard in the background before the suspect is seen on the ground being apprehended by the police.

Several protestors were outside as the talk carried on despite the interruption.

According to Smith, the assault was “relatively benign”.

“I think the original intent was to go after me but she got spooked by RCMP near me and instead charged out of the building and flailed at the man at the back,” said Smith.

“This is a pattern of harassment. When I did my Vancouver Island tour I  had a group of apparently professional protesters following me from town  to town causing disruptions.”

The event which was on “how transgender politics in school and society is undermining our freedom and harming women and children” faced several attempts by opponents to have it shut down and the speaker deplatformed.

Despite outrage from groups like the Association of Administrative Professional Staff at UBC (AAPS), who accused the transgender speaker of promoting hate, the university stood by their decision to allow the event continue, citing the fundamental freedom of speech.

“As a public academic institution, UBC also places a paramount value on the free and lawful expression of ideas and viewpoints,” claimed a statement by Andrew Szeri, the Provost of the institution.

This isn’t the first time that Smith has faced protest and even violence for speaking out against the province’s Sexual Orientation and Gender Identity (SOGI-123) curriculum.

In May, an Oak Bay event by Smith was disrupted by mobs of protestors. Among those calling for the transgender speaker to be deplatformed were NDP Vice President Morgan Oger, and Victoria School Board Trustee Ryan Painter.

According to Smith, the security and RCMP were slow to respond to the incident.

“The security were largely useless inside the event. These protesters are  aware that security have zero power if they resist. Even when it was clear we had a problem inside the security people took a long time to respond,” said Smith.

“After RCMP were blitzed with calls from the public they did send  uniformed officers but they attended outside the talk and not inside until there was an incident. So they are reactive not proactive in terms of protecting free speech from deliberately illegal acts designed to disrupt.”

When asked if any future events are the horizon, Smith says that he intends to bring a gender-critical “transsexual” speaker from the U.K. named Miranda Yardley for a future event.