VIDEO: Ford gets booed while Trudeau gets mixed reaction at Toronto Raptors Parade

The Premier attended the parade alongside Toronto city Mayor John Tory and Prime Minister Justin Trudeau who was met with a mixed reaction of heckling and cheers. 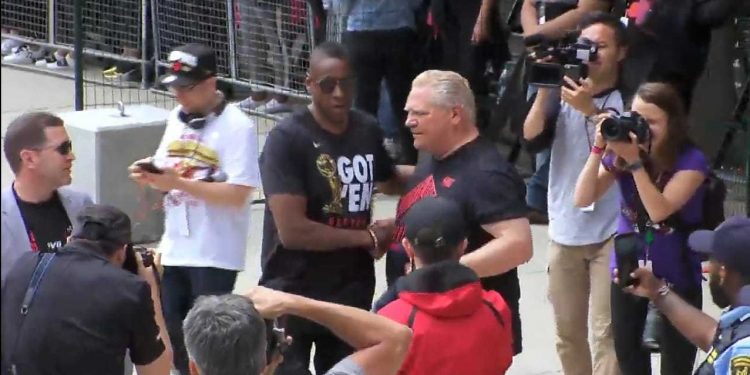 As fans descended en masse to attend the Toronto Raptors Parade in Nathan Phillips square, Premier Doug Ford was booed by a jeering crowd when he was introduced as a guest of honour on the stage.

The Premier attended the parade alongside Toronto city Mayor John Tory and Prime Minister Justin Trudeau who was met with a mixed reaction of heckling and cheers.

Polls have shown that Ford’s popularity has faltered after being elected to the premiership in 2018. Many have criticized the Progressive Conservative government’s widespread cuts since taking office.

The Ford government’s polling numbers have seen it drop into third place among other provincial parties. A May 23rd poll by Mainstreet Research found the PCs fall behind the Liberals and NDP with only a 22.4 per cent of the vote.