The Washington Post didn't engage with the substance of the letter or concerns for children spending hours masked each day despite their being at least risk of catching, spreading, or dying from the illness. 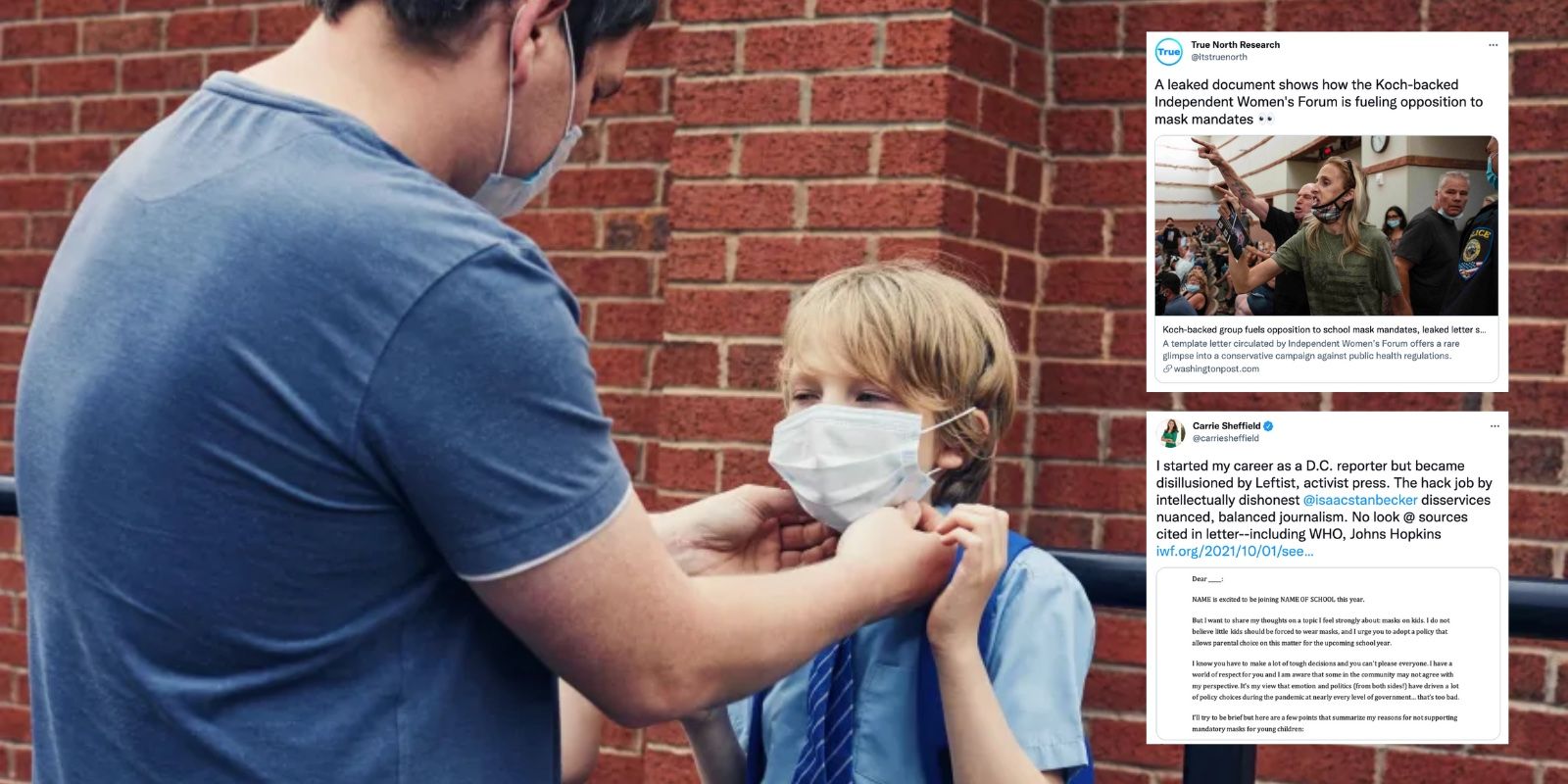 The policy director for the Independent Women's Forum penned a letter opposing mask mandates for school children. The Washington Post took it as an opportunity to defame the conservative women's group.

The letter was intended as a jumping off point for parents to talk to their children's schools about masking. It acknowledged the difficulty school administrators face and summarized reasons for opposing mask mandates for students.

A mother wrote it to her own children's preschool. Hadley Heath Manning told The Post Millennial that "The tenor of debate on this issue has reached an unhealthy fever pitch. It seems there's no longer any room for disagreement, or even questioning, of the status quo."

"In our experience," Manning said, "the left-leaning mainstream media equates expressing concern about masks on little children with advocating that more people die from COVID. It's hard to have a good-faith debate when the other side wants to accuse and discredit you rather than engage on the substance."

The Washington Post didn't engage with the substance of Manning's letter or her concern for children spending hours each day with their faces covered despite their being at least risk of catching, spreading, or dying from the illness.

"But the heartfelt appeal is not the product of a grassroots groundswell," the Washington Post writes. "Rather, it is a template drafted and circulated this week within a conservative network built on the scaffolding of the Koch fortune and the largesse of other GOP megadonors."

The points made in the letter include: "that COVID doesn't post as serious a health risk to children as it does to adults," which is well-known and understood by medical professionals across the country. Of the over 700,000 COVID deaths in the US, the CDC recorded less than 500 of those in children under 18.

"We do not yet know enough about the potential downside of mask-wearing for young children," the IWF letter points out. These points are echoed by Dr. Tracy Hoeg and Dr. Jay Bhattychara, who say that the harms of masking children outweigh the risks to them from not masking. Their reasons include that children, in many cases, do not wear the masks properly, drastically reducing any potential efficacy.

"The rest of the world (outside of the US) seems to understand that masks on kids are not a good idea," the letter reads. This comes as findings show that mask guidance for US kids is the strictest worldwide.

As seen in a panel discussion between Open Schools USA and the American Federation of Teachers, wherein advocates for children stated that kids should not be masked for 8 hours during the school day, the US CDC recommends full masking for all children older than two years of age.

The World Health Organization, the EU, and the UK all say that's unnecessary. The UK does not have masking for school children. The WHO says no one under five years of age should be masked, while New York Governor Kathy Hochul has required masking for all children two and up.

The Washington Post quotes a Kaiser Foundation study from August, saying "Most parents of school-age children support requiring masks, polling suggests. More than six in 10 parents say their child's school should make masks obligatory, at least for unvaccinated students and staff." But the study they source was only talking about parents' preference for kids between the ages of 12-17, and not grade school kids.

However, for the Washington Post, the letter "offers a rare glimpse into the inner workings of a well-financed conservative campaign to undermine regulations that health authorities say are necessary to contain the coronavirus. The deeply felt frustrations of many parents who want a greater say, school superintendents say. But their anger is also being fueled by organized activists whose influence is ordinarily veiled."

WaPo went after Carrie Lukas, president of the IWF, and touts CDC studies that "found that schools with mask requirements saw fewer outbreaks than those without them," not noting at all that the methodologies of these studies have come into question. They write that the studies and experts cited by IWF are not worthwhile and look to the donor base of IWF as a means to discredit them.

However, the issue of masking children is far from settled science, and pediatricians across the country have stated their opposition to masking. It may be that much of the reason there has not been a greater outcry from doctors who oppose masking is that in many cases, employers and insurers have made it known that they would prefer their member doctors not to state any opposition to CDC guidance. This has left many doctors feeling that they are unable to speak out.

The Washington Post presented similar sentiments to those posed by NBC's Brandy Zadrozny, who claimed that parents speaking up at school board meetings, to school administrators and on social media was nothing more than propaganda from conservative special interest groups. This is a narrative being used to discredit parents who offer concerns about masking.

But these parents, who write letters, go to meetings, get administorators on the phone, and demand action, are advocates for their children's best interests in the sprawling, often dysfunctional American educational system.

There is an unwillingness in mainstream media to believe and understand that parents who have seen their children's educations truncated, abandoned, and toyed with for partisan political gain are fighting for their kids' future and not for some power-hungry political group.

Instead of open-minded debate or willingness to consider data showing the limited risk of COVID to school children, there has been a push to label those parents who disagree with the CDC guidance on masking, or critical race and gender theory, as conservative shills or extremists.

The National School Board Association sent a letter to President Joe Biden, asking him to engage the federal government and law enforcement in silencing, punishing, and even arresting parents who show up at school board meetings and demand to be heard. That letter paints parents who disagree as extremists, domestic terrorists.

They write that "America's public schools and its education leaders are under immediate threat." As such, it goes on, the National School Boards Association "respectfully asks for federal law enforcement and other assistance to deal with the growing number of threats and violence and acts of intimidation occurring across the nation."

"As these acts of malice, violence, and threats against public school officials have increased, the classification of these heinous actions could be the equivalent to a form of domestic terrorism and hate crimes," the letter reads.

Perhaps the effect is not to distort public debate but to bring reason to the insanity, to demand that school boards and administrators trust the science that shows children are at a far lower risk than adults, and that comorbidities play a substantial role in that risk. Our international counterparts are doing more to put kids first and ensure that they experience the least amount of harm possible from pandemic-inspired restrictions. But in the US, it's parents who are taking the heat for being the only ones to stick up for their kids and demand they be treated fairly.

Update: The Associated Press weighed in on the matter, stating that the claim that "The National School Boards Association is asking the Biden administration to label parents who protest school policies domestic terrorists" was "false." The AP said that the NSBA was not asking the Biden administration to label angry, concerned parents as "terrorists," but was instead asking for an investigation into threats that "could be the equivalent to a form of domestic terrorism and hate crimes."

Attorney General Merrick Garland said in a memo that he is "directing the Federal Bureau of Investigation, working with each United States Attorney, to convene meetings with federal, state, local, Tribal and territorial leaders in each federal judicial district within 30 days of the issuance of this memorandum. These meetings will facilitate the discussion of strategies for addressing threats against school administrators, board members, teachers, and staff, and will open dedicated lines of communication for threat reporting, assessment, and response."