The real answer to Kessler's inquiry as to is that he and other journalists in mainstream and left-leaning outlets decided it did, and it all hinged on Biden taking the presidency. 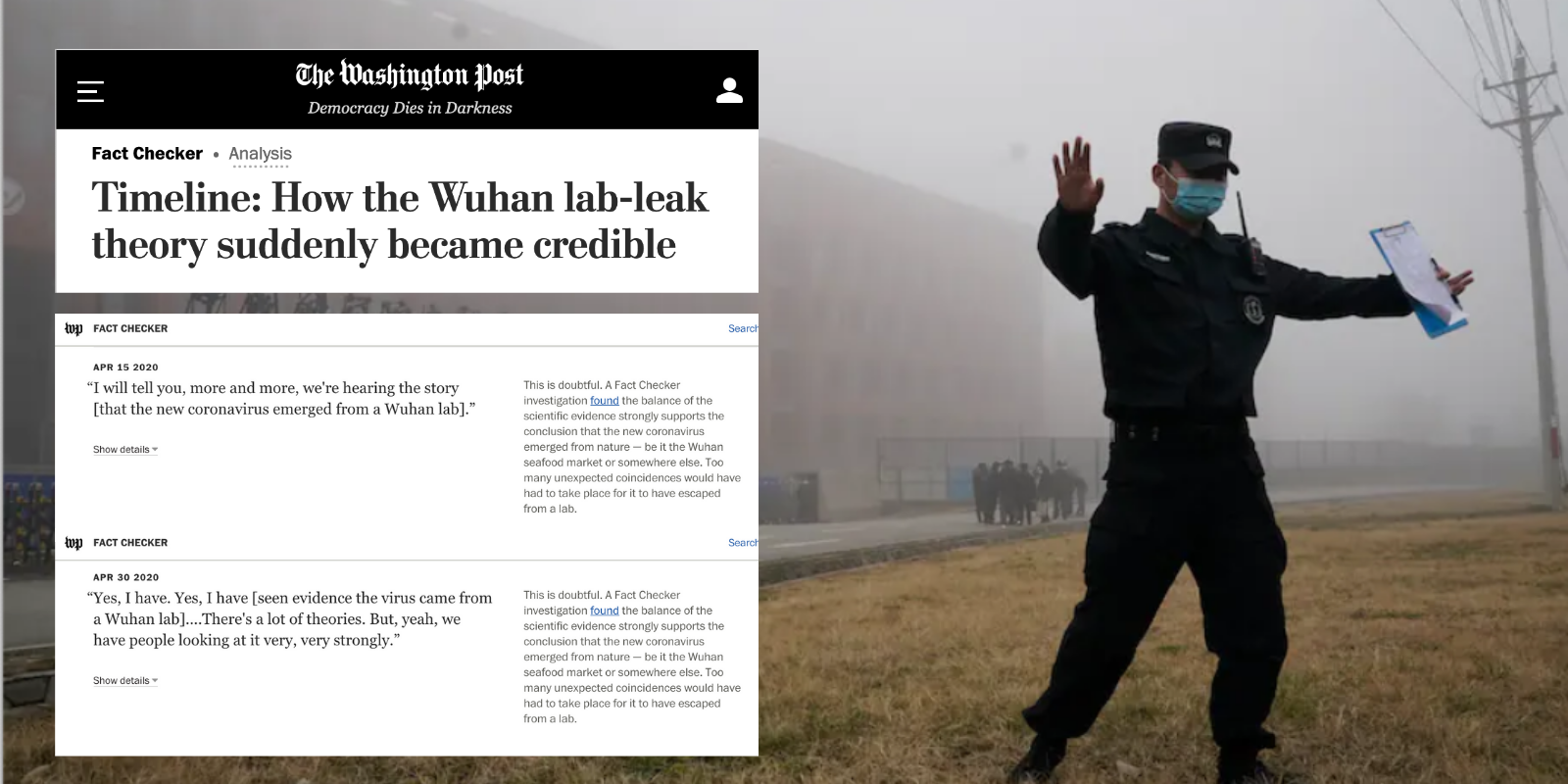 Washington Post resident fact-checker Glenn Kessler wrote a handy timeline to explain "How the Wuhan lab-leak theory suddenly became credible." He writes "in recent months the idea that it emerged from the Wuhan Institute of Virology—once dismissed as a ridiculous conspiracy theory—has gained new credence."

Kessler was one of those who purported the lab-leak idea to be a "ridiculous conspiracy theory," and he did it as part of his ongoing effort to discredit anything and everything having to do with President Trump and his administration.

In WaPo, Kessler writes that the way this lab-leak theory became viable was a two-step process. "For one, efforts to discover a natural source of the virus have failed. Second, early efforts to spotlight a lab leak often got mixed up with speculation that the virus was deliberately created as a bioweapon."

But Kessler was one of those who did that, conflating the idea that the virus emerged from a lab to the idea that it was intentionally created as a bioweapon and using that to discredit Trump.

This was part of Kessler's fact-check last spring against Trump's statements that the virus emerged from the Wuhan Institute of Virology. He wrote: "Renewed questions about the virus’s origin brought a rush of alternative theories. Some claimed the virus was a bioweapon. Others suggested it had been altered for a scientific experiment or was simply a viral sample that escaped from a lab. Let's be clear: No scientist we spoke to thinks the new coronavirus was designed as a bioweapon." These are two distinct and separate ideas, the first is about a purported fact and the second is about an analysis of that fact.

Kessler also said that that "The Trump administration's messaging was often accompanied by anti-Chinese rhetoric that made it easier for skeptics to ignore its claims." Much of this had to do with Trump's repeatedly calling COVID the "China virus," which was interpreted to somehow be racist, even though lots of diseases are named after lots of places. American media was so anti-Trump that they were in favor of anything he wasn't—that included the Chinese Communist Party and their messaging.

In his new admission that the lab-leak theory is actually credible, Kessler tracks through the timeline of stories claiming that the virus could have been of lab origin. The Post Millennial ran a similar story, over a year ago, to track how the theory that the virus came from the Wuhan Institute of Virology went from just a hypothesis to a US federal investigation. Kessler tracks the exact same stories. But for Kessler, the turnaround comes when journalistic outlets like The Times of London started reporting that the lab-leak idea could be more than just a theory.

He notes that on Jan. 15, the State Department issued a fact-sheet, the result of a months' long investigation that began the previous spring, stating that "The U.S. government has reason to believe that several researchers inside the WIV became sick in autumn 2019, before the first identified case of the outbreak, with symptoms consistent with both covid-19 and common seasonal illnesses. …

"The WIV has a published record of conducting 'gain-of-function' research to engineer chimeric viruses. But the WIV has not been transparent or consistent about its record of studying viruses most similar to the covid-19 virus, including 'RaTG13,' which it sampled from a cave in Yunnan Province in 2013 after several miners died of SARS-like illness."

Kessler's next point on the timeline of how this theory attained credibility? "Jan. 20: Joe Biden becomes president."

It is only after Biden becomes president that mainstream media in the US became willing to talk about this theory. Kessler, and others, linked the lab-leak theory to a theory that the virus was intentionally made, used it to discredit the lab-leak idea, used it to discredit Trump, his administration, and the State Department, and is now singing a different tune altogether.

The real answer to Kessler's inquiry as to "How the Wuhan lab-leak theory suddenly became credible" is that Kessler and other journalists in mainstream and left-leaning outlets decided it did, and it all hinged on Biden taking the presidency.

In April 2020, Trump said "I will tell you, more and more, we're hearing the story [that the new coronavirus emerged from a Wuhan lab]."

In reply, Kessler fact-checked him, saying "This is doubtful. A Fact Checker investigation found the balance of the scientific evidence strongly supports the conclusion that the new coronavirus emerged from nature — be it the Wuhan seafood market or somewhere else. Too many unexpected coincidences would have had to take place for it to have escaped from a lab."

Trump was asked if he'd seen evidence that the virus was made in the lab, and he said "Yes, I have. Yes, I have seen it....There's a lot of theories. But, yeah, we have people looking at it very, very strongly."

Kessler, again, issued the same fact check as before.

Kessler's full statement in May 2020 read: "The balance of the scientific evidence strongly supports the conclusion that the new coronavirus emerged from nature — be it the Wuhan market or somewhere else. Too many unexpected coincidences would have had to take place for it to have escaped from a lab. But the Chinese government has not been willing or able to provide information that would clarify lingering questions about any possible role played by either Wuhan lab.

"That's why intelligence agencies are still exploring that possibility, no matter how remote it may be. And even then, it’s unclear when or if we will ever know the origin story of this new virus that is causing death and economic turmoil around the globe."

Kessler said that Trump's statements on the potential for a lab-leak, made while the US was investigating the origins of the virus, were false. He used these fact-check claims to bolster his total number of Trump fact-checks, saying: "In four years, President Trump made 30,573 false or misleading claims."