Kessler recently fact-checked South Carolina Senator Tim Scott for basically not being black enough, digging into his ancestry and family history of enslavement. 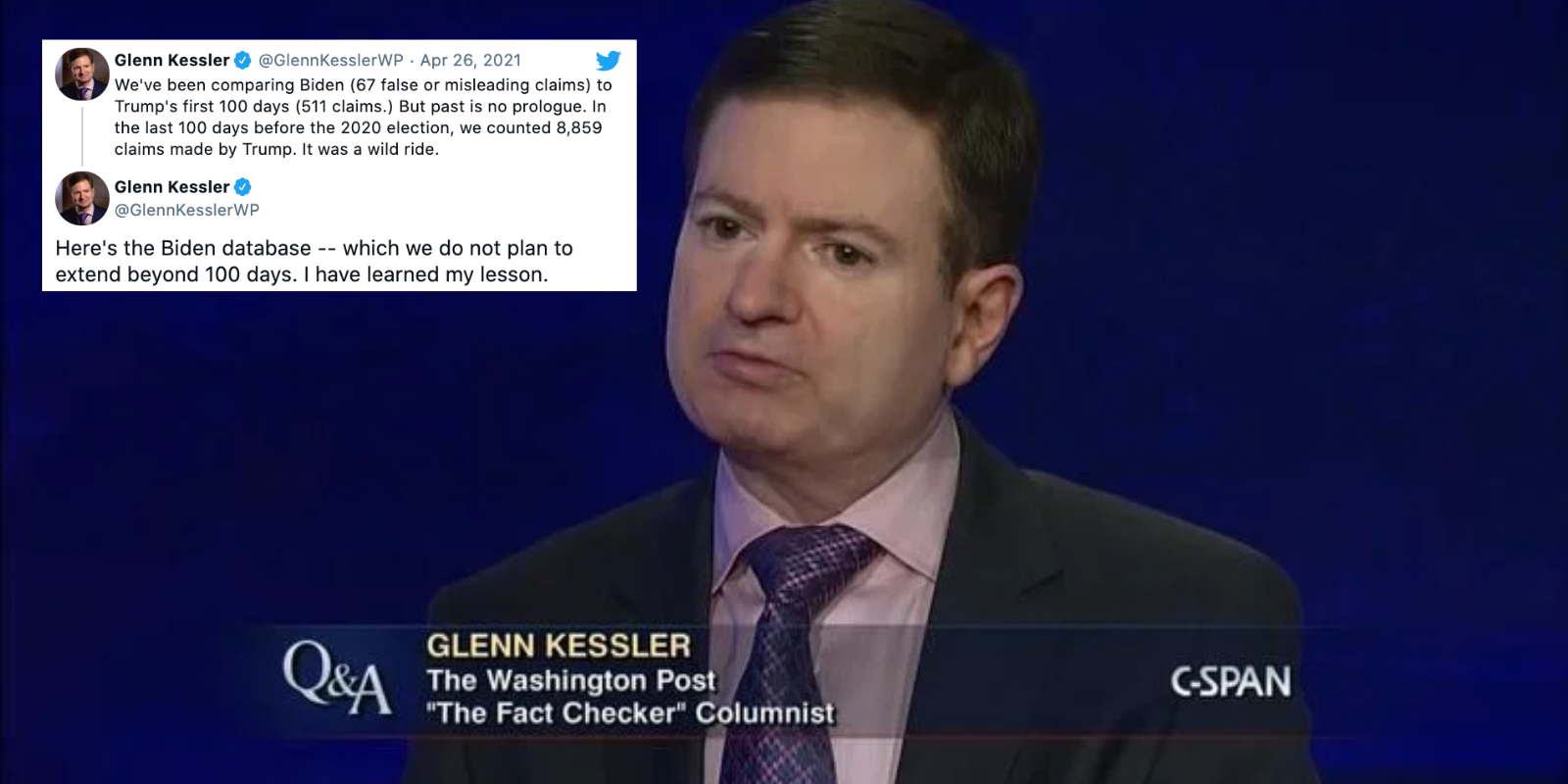 Washington Post's resident fact-checker Glenn Kessler began the Biden era by keeping a fact-check database on the president, as he did with Trump—but now, after the first hundred days, he's withdrawing from that mission.

Kessler recently fact-checked South Carolina Senator Tim Scott for basically not being black enough, digging into his ancestry and family history of enslavement.

Kessler said outright that he wouldn't be fact-checking Biden as hard or as rigorously as he'd fact-checked Trump, who spread his own disinformation about Georgia voting laws, and who said Trump was president during a time when Biden had already entered the Oval Office.

Kessler defended the abandonment of his cause on Twitter. He compared the two endeavors of fact-checking each president, noting that by his count Biden's errors or false or misleading claims were substantially less than Trump's, saying that he had "learned his lesson."

By that, he means "who knows what the next four years will bring." But in his database of fact-checks made against Biden, Kessler writes that "More typical for Biden, when he uttered a false statement, was some subtle truth-stretching."

Kessler spent four years slamming President Trump and his administration, changing the definition of "fact checking" to include things like context and bias analysis.

So let's have a look at some of those fact checks against Trump:

Trump spoke about the Abraham Accords, which reduced tensions in the Middle East so substantially that he was nominated for a Nobel Peace Prize, and air travel began between Israel and the UAE. Of this momentous achievement, Trump said: "The Abraham Accords opened the doors to a future of peace and harmony, not violence and bloodshed."

Kessler said that was "misleading" because "Unlike Jordan and Egypt, the Arab and North African nations extending diplomatic recognition to Israel during his presidency have never been at war with the Jewish state." He went on to say that the main conflict between Palestinians and Israel was ignored by Trump. However, the pressure that the surrounding Arab nations' normalization of Israel relations put on Palestine was at least half the point of the Accords in the first place.

Kessler marked as "false" Trump's statement that Biden would ban fracking, and said that Trump repeated the claim 141 times. After entering office, Biden signed an executive order that amounted to banning fracking. Politico, writing a fact check in response to all the outlets that said Biden banned fracking, said that "Biden's climate change plan never called for banning fracking. Instead, it proposed banning new fracking on federal lands."

The quibble is that Biden hasn't said "all fracking stops right now, put your drills down and walk away." Instead, Biden said, "once you're done fracking under this contract, there'll be no new contract." Trump was essentially right, Biden has banned fracking while being legally obligated to uphold federal contracts.

Kessler said that Trump's claim that the US had started building a border wall was false, and that he said this 258 times. Kessler rated this false because "Instead the money was restricted to fencing, and it was generally used for replacement fencing, with relatively few miles built where no barrier had been before. Trump has seized funds from military construction projects to build the barrier."

Upon taking office, Biden reversed Trump's border wall plans, leaving equipment and materials littering the construction areas, and migrants entering into the country through those unfinished areas of the border wall. Since then, the Biden administration has said that they would consider filling in gaps in the border wall, that apparently doesn't exist, because according to Glenn Kessler, the US never started building it, because it was a fence not a wall.

The full list of Kessler's fact-check stretches can be found here. And for sure there are some legitimate claims, politicians lie, and that statement needs no partisan fact-checker to prove it, which is probably a good thing, because Kessler and his fact-check operation are gonna take a breather.

Kessler said that while the fact-checks would continue, the database of Biden's lies, truth-stretches, and falsehoods would not. And a perusal of the database on the first 100 days shows that many of Biden's errors had been attributed to flubs.

He writes: "A number of Biden’s statements were flubs. For instance, he said Hispanics were the fastest-growing immigrant population, when their rate of growth has been overtaken by that of Asian Americans in the past decade." Without being too biased, I think it's fair to say that Trump would not have been given the benefit of the doubt on something like that. Perhaps, had Trump made the claim, it would have been classed as some kind of anti-Asian hate.

It seems that Kessler simply lacks the manpower, and perhaps the endurance, to soldier on. The question to ask now is: Who will take up the helm?