The Washington Post's head fact checker doubled down on why the publication still has no plans to scrutinize President Joe Biden's lies in the same vicious fashion as the Trump administration was attacked. 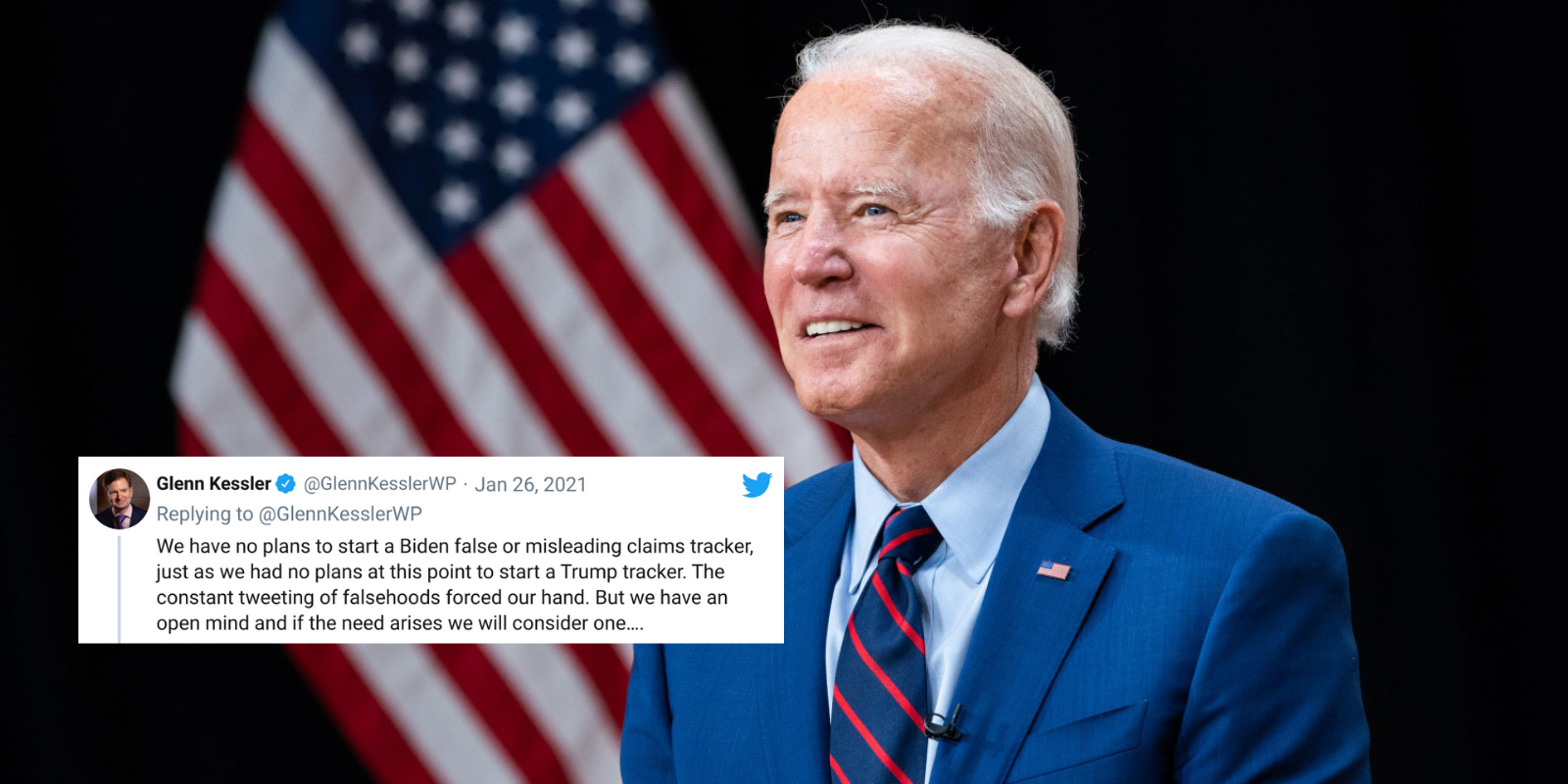 The Washington Post's head fact checker doubled down on why the publication still has no plans to scrutinize President Joe Biden's lies in the same vicious fashion as the Trump administration was attacked.

The news outlet whose slogan is "Democracy Dies in Darkness" ended its false claims project against former President Donald Trump on Inauguration Day without current plans to launch an additional Biden database "at this time."

"We welcome all suggestions for fact checks," the fact checking team's editor and chief writer Glenn Kessler tweeted, noting that several right-wing counterparts, including conservative commentator Stephen Miller and The Federalist, have been urging fact checks of 'Biden lies.'"

Then Kessler took the opportunity to explain what the Washington Post thinks "makes for a good fact check."

"The best fact checks are pinned on a number, uttered by a politician. We then use that number to dig into policy issues," Kessler elucidated. "The last president was rather loquacious, speaking or tweeting without any prior fact checking, and much of it was not worth detailed fact checking."

Psaki failed to condemn Antifa militants who marched through the streets of Portland and Seattle to commit widespread vandalism last week. Then when Biden was unmasked on Jan. 20 at the Lincoln Memorial mere hours after signing an executive order mandating that face masks be worn on federal property, Psaki shrugged off the incident.

"We have a high bar for such statements because we prefer to pin the Pinocchios on a policy-maker and hold her or her accountable for their words," Kessler explained.

He then insisted that the publication only fired at such figures "once or twice" during the Trump and Obama administrations.

"We also keep an eye on possible policy flip-flops and inconsistencies. Whether Biden succeeds in getting stimulus checks that amount to $2,000 is too soon to assess," Kessler argued.

"We have no plans to start a Biden false or misleading claims tracker, just as we had no plans at this point to start a Trump tracker," Kessler declared. "The constant tweeting of falsehoods forced our hand. But we have an open mind and if the need arises we will consider one."

The initial database started one month into Trump's presidency, the Washington Post's director of communications Shani George told the Daily Caller. However, it was quickly revealed that the Washington Post started fact checking Trump's purported false claims on Jan. 20, 2017, the first day of his presidency.

Kessler linked an exit expose of outgoing President Barack Obama's "biggest whoppers" when he left the White House with more than 250 statements fact checked by the Washington Post.

Throughout Trump's four years in the Oval Office, the Washington Post's fact checkers cited 30,573 "false or misleading claims" committed by the president. The final count was revealed on Jan. 20 just after Biden was sworn in.

The Trump database was filtered by topic, including economy, immigration, jobs, coronavirus, foreign policy, Russia, biographical record, and Ukraine probe, among others. Sources ranged from Twitter to news conferences to leaked transcripts.

"WaPo starts the narrative to explain why they won't tackle Biden lies with the same fervor they attacked Trump," remarked Seattle-based talk show host Jason Rantz. "For further context, WaPo just published an editorial that asked for FOX News to be taken off the air because it's essentially too critical of Biden and Democrats."

The Washington Post op-ed, entitled "Fox News is a hazard to our democracy," takes issue with Fox News hosts Sean Hannity and Tucker Carlson for blasting Biden as "cognitively struggling" and attempting to "sow doubt about the prevalence of white supremacy," respectively.

The back-to-back primetime duos have become "even more outlandish as they try to gin up anti-Biden rage within their audiences," the Jan. 24 article alleges.