"There is no lasting 'natural immunity to COVID. You can get covid over and over and over again... Also choosing not to kill off millions of vulnerable people (as the US is doing) isn’t a 'critical flaw'".

Libby Emmons Brooklyn NY
Nov 27, 2022 minute read
ADVERTISEMENT
ADVERTISEMENT
In response to a Washington Post article about a Covid outbreak in China, which the CCP met with insanely strict lockdowns such as welding residents into apartment buildings, the outlet's tech editor and notorious crybully Taylor Lorenz came out essentially in favor of deadly lockdowns, and opposed to the US not enforcing harsh Covid restrictions.

The article Lorenz referenced, by By Christian Shepherd and Vic Chiang, spoke about how China's "zero Covid" policy has a major flaw, which is that the population lacks natural immunity.

"After months with only occasional hot spots in the country, most of its 1.4 billion people have never been exposed to the virus," the article reads.

Lorenz replied that "There is no lasting 'natural immunity' to COVID. You can get covid over and over and over again bc there are so many endlessly evolving strains and antibodies wane."

"Also," she continued, endorsing the lockdowns, "choosing not to kill off millions of vulnerable people (as the US is doing) isn’t a 'critical flaw'". 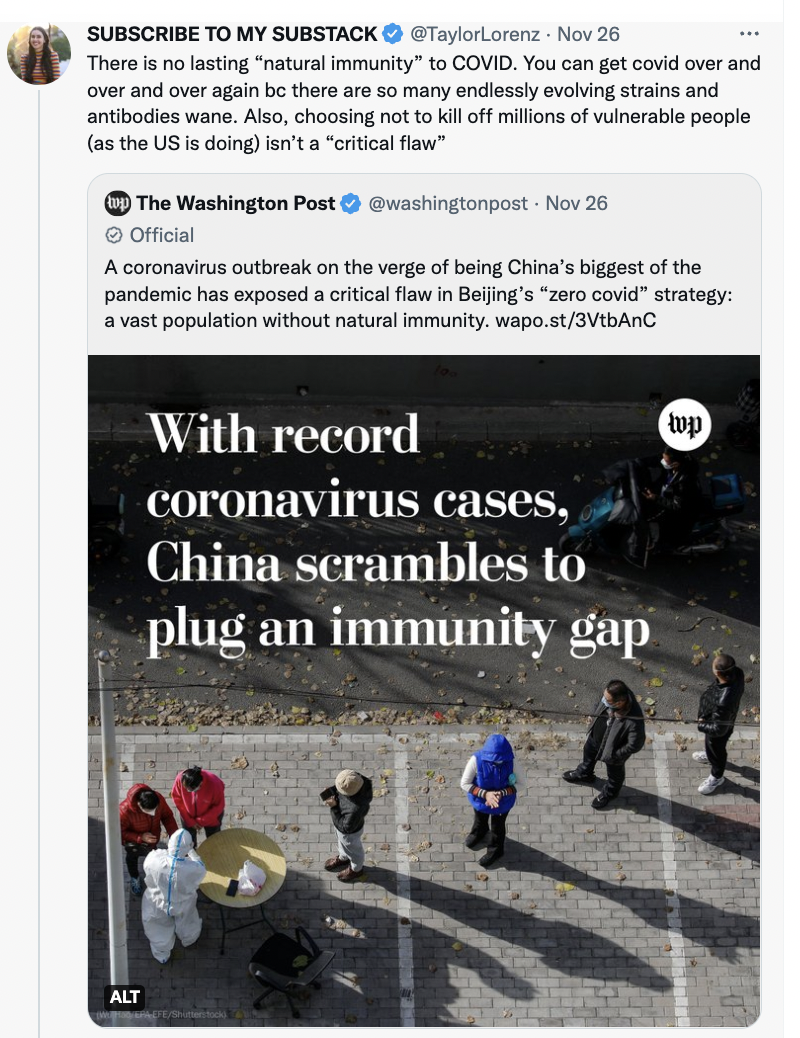 Lorenz, who claimed she got PTSD from mean tweets, has been a big proponent of continued mandates and restrictions in the US.  She speaks frequently about "long Covid," and the problems with not restricting people.

She encourages people to "shut the f*ck up" if they don't want to address issues of "long Covid." 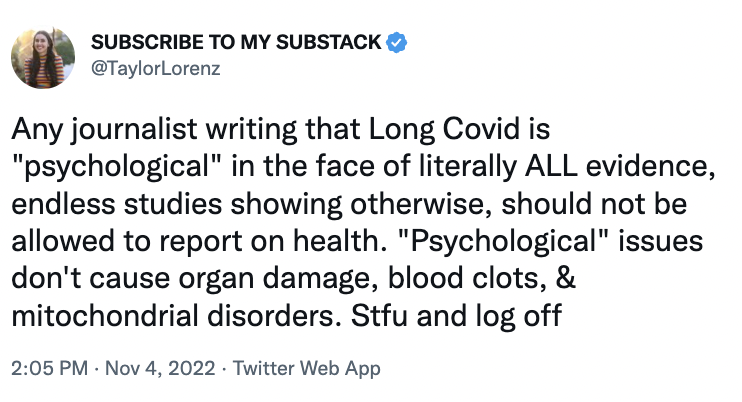 Lorenz blasts those who are going about their lives normally, without specifc concern for this virus.

And for Lorenz, all of this means that leader should have "pushed for covid protections to keep anyone safe." If that's what she's looking for, someone should probably let her know that she could move to China and have the doors to her apartment building welded shut, all in the name of her own safety.

With the lack of government controlled restrictions, Lorenz notes that individuals must restrict themselves.

"If ur hosting an event, outline covid safety precautions early, clearly, and stick to them. We are still in a pandemic, long covid continues to disable millions, and thousands are still dying (many old and vulnerable) You should care about protecting them," she writes.

These restrictions in China have become so intense that after an outbreak at Foxconn forced the iPhone factory into lockdowns, major protests broke out. On Thursday, restrictions in Shanghai resulted in people being locked inside an apartment building that caught fire, with residents dying while being trapped inside. This led to further protests that continued throughout the weekend.
Lorenz shared a thread from account @wsbngl, which mocked the idea that a nation not achieving natural immunity is a "critical flaw."

"Apparently a 'critical flaw' in China’s covid strategy is that they have so far failed to mass infect their population (and purge all those incovenient vulnerable bodies that threaten to disrupt economic activity and overwhelm hospitals)," the thread cited by Lorenz reads.

"It’s honestly shocking and frightening to see dozens and dozens of articles from mainstream media outlets that have exactly zero regard for the lives of perhaps a million or more Chinese who will die if covid spreads out of control," it continues, doubting that the WaPo writers had any concern for the Chinese people, and prioritizing lives saved by not contracting Covid over lives lost through lockdown measures.

"There is posturing about violation of rights and feigned concern for those who can’t access mRNA vaccine. But it’s crystal clear that the actual focus is the economic nuisance and economic threat posed by China trying to avoid widespread transmission in order to avoid mass death. None of this is to suggest China should pursue a 'zero covid' approach. But it should be considered a difficult question. There is obviously tremendous merit in preventing so much illness and death. And there is something deeply revealing and disturbing about not seeing that," it concludes.

The WaPo article discusses how China's efforts to curb the spread of the incredibly contagious virus have been hampered as the government's "ever-stricter measures fail to keep up with more-transmissible variants." Conflicting guidance has made things on the ground all that more confusing.

Many major cities, including Beijing, Guangzhou and Chongqing, have been forced back under stay-at-home orders, with shopping centers, schools, and museums shut down. Quarantine facilities are springing up in conference centers, as they did at the pandemic's start.

The World Economic Forum has also come out in favor of China's Covid restrictions, with Klaus Schwab saying "We should be very careful in imposing systems," he concluded, "but the Chinese model is certainly a very attractive model for quite a number of countries."
ADVERTISEMENT
ADVERTISEMENT
lorenz tears covid