The conflation of basic rights and freedoms with abhorrent concepts like white supremacy paves a path for tyranny and authoritarianism under the guise of anti-racism. 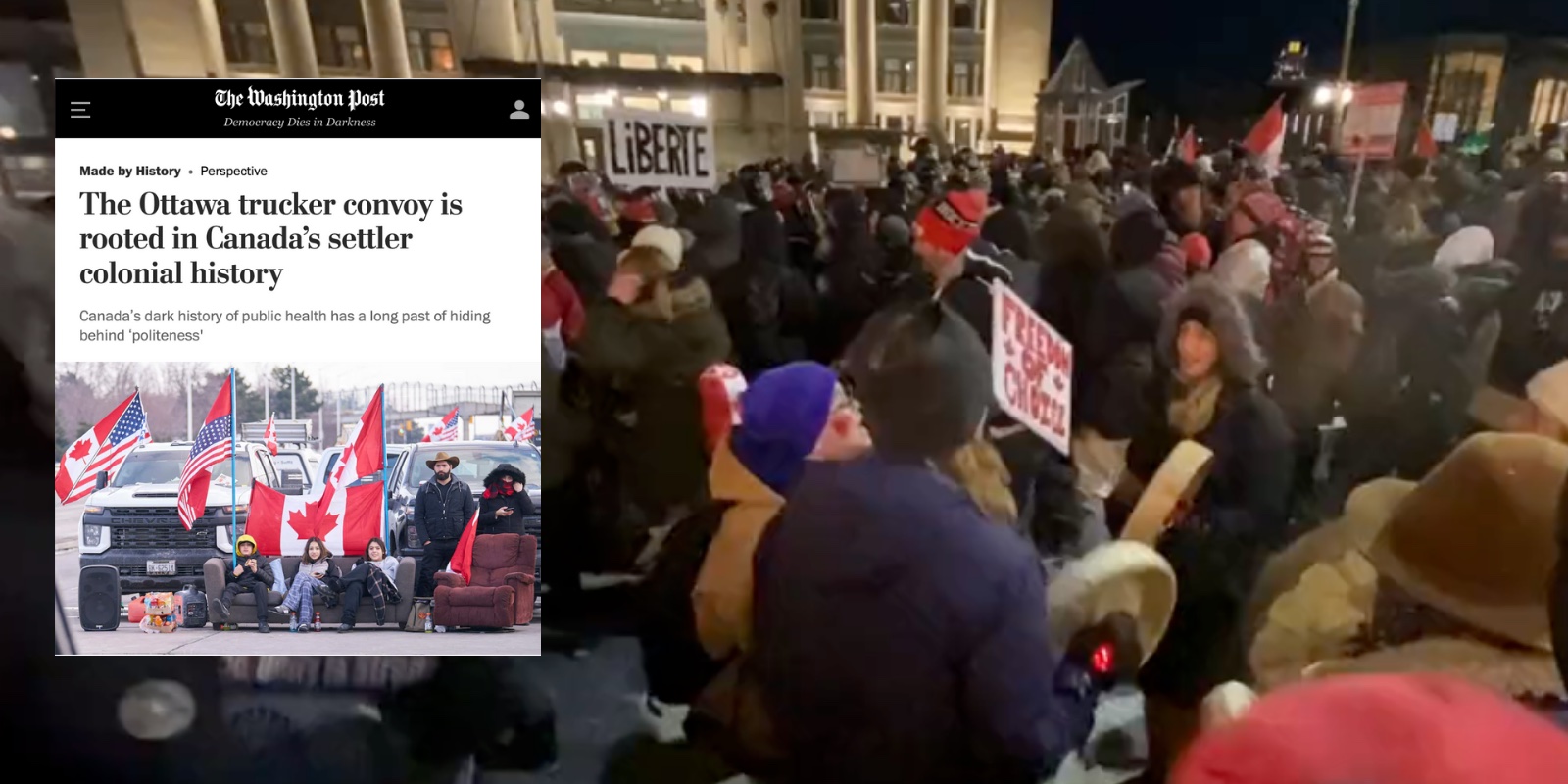 Freedom is not white supremacist. Freedom is not a function of white supremacy. Freedom is the natural condition of mankind, and our rights to it were granted by God. Every person on this earth is entitled to liberty, justice and self-determination. But for columnist Taylor Dysart and the Washington Post, calls for freedom from Canadian truckers are an "entitlement" that exposes their "white supremacy."

The conflation of basic rights and freedoms with abhorrent concepts like white supremacy paves a path for tyranny and authoritarianism under the guise of anti-racism.

Dysart is a PhD student at an Ivy League university, so she is likely familiar with the concept of "unpacking," so let's unpack her claims. Dysart blasts the "primarily [w]hite supporters of the Freedom Convoy," who she says "argue that pandemic mandates infringe upon their constitutional rights to freedom."

By linking the protesters' demand for their rights to white supremacy, Dysart intends to show that the claim for rights to be free from tyranny is functionally racist. "The notion of 'freedom'," Dysart goes on to say, "was historically and remains intertwined with [w]hiteness, as historian Tyler Stovall has argued."

Stovall's book White Freedom: The Racial History of an Idea was inspired, he told the California Commonwealth Club, by the fact that the US Capitol was built with slave labor, and that when their labor was finally honored under the George W. Bush administration, the memorial to those enslaved builders was called Emancipation Hall. Stovall said it should have been called Slave Hall, instead.

The book "traces the complex relationship between freedom and race from the eighteenth century to today, revealing how being free has meant being white."

Dysart applies Stovall's theories, written specifically about America and France, to Canada, where there have been long struggles between the Indigenous population and the white settlers. But it's a long stretch between those struggles and the demands of the Freedom Convoy, which has gained much support in the Indigenous communities of Canada.

Canada's Indigenous population also doesn't want the government to take their rights to self-determination or to make their own medical decisions.

Indigenous protesters joined the truckers in Ottawa to state their opposition to the federal government telling them what to do. And after decades of interference from the government, with Canada's residential school system specifically, about which Dysart goes into detail, it's no wonder that Indigenous Canadians are opposed to government mandates.

Dysart uses the coronavirus crisis as a means to say that the freedom protesters' demands for freedom and self-determination are rooted in whiteness.

She writes that the "belief that one’s entitlement to freedom is a key component of [w]hite supremacy. This explains why the Freedom Convoy members see themselves as entitled to freedom, no matter the public health consequences to those around them."

The protests against mandates, against infringements on personal freedoms and liberties, captured the hearts of many Canadians. Indigenous clan mothers blessed the protests, Indigenous drum circles formed, black Canadians defended their rights in the face of the tyrant Justin Trudeau, and Sikhs came out to Parliament Hill to make their voices heard and their faces seen. Given the broad support from many Canadian communities, there is no justification for calling this a "white" protest. Trudeau is the one who has imposed restrictions on freedoms, and refused to allow the people's representatives to debate the issue.

Trudeau has gone so far as to invoke the Emergencies Act in response to the protesters' demands for their rights. And he's done so, specifically because of their ideology of liberty and freedom for all. In his justification, the Trudeau government said that the "protests have become a rallying point for ant-government and anti-authority, anti-vaccination conspiracy theory and white supremacist groups throughout Canada and other Western countries."

Trudeau, like Dysart, uses the idea that the protesters are "white supremacist," which they are provably not, as the basis for cracking down on those who oppose his ultimate authority. The opposition of his tyranny is really what he doesn't like, and in an effort to uphold his own power he condemns the people who oppose him in whatever terms he feels will sway support in his favor. Dysart parrots the talking points of a prime minister who wore blackface on more occasions that he can remember. But Trudeau is like any leader who feels the support of his people waning, grasps even more tightly to his power. That is what supremacy looks like.

Freedom, regardless of Dysart or Stovall's desire to paint it with the brush of whiteness, is the yearning and right of all mankind. That freedom was claimed by Europeans in the New World does not taint what freedom is. Freedom was also claimed by enslaved people in America, as it was their God-given, natural right. Freedom was claimed by the Indigenous people of Canada, as it was their God-given, natural right. And freedom has been claimed by many millions of people who have come to Canada and America in order to live in nations that respect that right.

This hasn't stopped Dysart, or Trudeau, from claiming that the protesters are racist white people. It is a convenient tool, to label people who are opposed to you as racist. It makes it easy to discount their views, and for others to discount them as well. During the past few years of this pandemic, which has inspired so many authoritarian acts by governments who have bypassed citizens' rights to representation, rights laid out in founding documents, and natural rights to freedom of movement, to medical liberty, those who have demanded their rights and freedoms have been labeled as racist fascists by their oppressors.

This is a tactic, not truth, and it's one that Dysart, in her exploration of freedom as a racist concept, wields fully as a means to back tyrannical governments against their people.

Dysart writes that Canada's "history of freedom, then, was founded in the unfreedom of Indigenous people." Moreover, she takes issue with the protesters' apparent ignorance of this background. "This dynamic has been unnoticed and misconstrued by organizers, attendees and supporters of the Freedom Convoy," she writes, going further to say that the protesters' claim that Canada itself is a free nation is false. "They are advancing a settler colonial genealogy that deploy the language of 'freedom' and 'unity' while engaging in actions that are harmful and violent."

The protesters in Ottawa have not been violent. They have been joined by many Canadians of all races, both at Parliament Hill, online, and in print, who advocate for their rights, who refuse the tyranny of restrictions and mandates that have been imposed by federal and provincial leaders, and who demand the freedom that is rightfully their own.