WATCH: Abigail Shrier testifies before US Senate that gender ideology is 'misogyny in progressive clothing'

"By enshrining gender identity as a protected category this bill would make it impossible to legally distinguish between a woman and a biological male who claims a female identity," Shrier said. 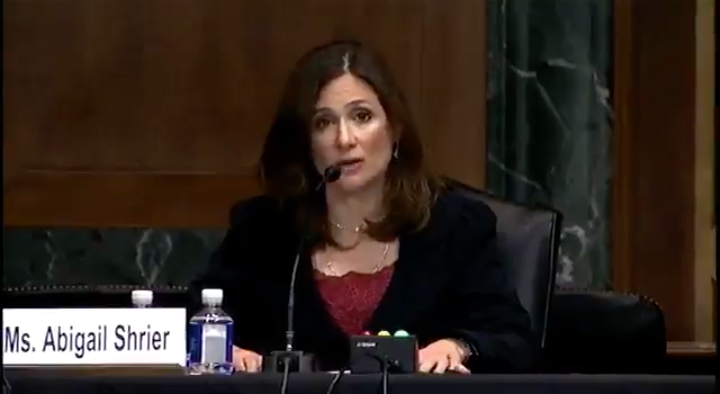 Abigail Shrier testified before the Senate Judiciary Committee on Wednesday at a hearing on the Equality Act. Shrier spoke out against the Act as something that, "In the name of inclusivity," will make "life far less safe, far less fair, and far less inclusive for America's women and girls."

"By enshrining gender identity as a protected category this bill would make it impossible to legally distinguish between a woman and a biological male who claims a female identity for whatever amount of time and for whatever reason or purpose," Shrier said.

Shrier said that this bill does much more and she doubts that those who drafted the legislation have considered the impact of what they have proposed. The Equality Act would mandate that girls' athletics programs allow biological males to compete with and against girls.

"If a pre-school has a policy that only female teachers may accompany little girls to the bathroom, and your daughter's male teacher suddenly identifies as female, ought that teacher have a legal entitlement to accompany her?"

"Does that strike anyone in this room as safe or sensible?" She asked.

The Equality Act would force women's crisis centers, safe spaces for female survivors of domestic abuse, to accept biological males who identify as transgender, meaning that women who have been abused by men are housed with them.

"The plain truth is that it is not sensible, not safe, and certainly not just to end these hard-won protections for women and girls in the name of equality," she said.

Shrier said that the progressives who are pushing this bill do not care about women, but are only concerned with not being called names like "transphobe" or "homophobe."

"Even prominent gender therapists attest that people can be on a 'gender journey' and identify as one thing one day and another the next. They have that freedom in America. Should we undermine women's sports and protected spaces to allow gender-fluid males a 'gender journey?'" She asked

"Just last week after the Washington Correctional Facility for Women began housing prisoners according to gender identity, half a dozen men transferred into the women's prison. One of the inmates raped a female in the women's prison on arrival. If you pass this bill, you can expect hundreds more victims like this one. And that has nothing to do with transgender people, but opportunistic self-identification by violent male felons."

Shrier said that most transgender-identified persons are not in favor of this kind of thing, excepting political activists, she said "most would never think of stealing women's scholarships by forcing young women into demoralizing contests with male bodies."

"But gender ideology, which is at the heart of this bill, is misogyny in progressive clothing. Gender ideology tells women and girls that they are not entitled to their fear or their sense of unfairness as their protected spaces are eliminated," Shrier said.

She said that it isn't women's identities that are at risk, but "our bodily integrity."

"Being a woman is a lifetime commitment. It entails profound blessings, but also physical vulnerabilities. For generations, women like the late Justice Ruth Bader Ginsberg, fought to create sex-based protections to make life safe and fair for women. If you vote to take away those rights, don't pretend you've achieved a Civil Rights victory."

The Equality Act was passed by the US House of Representatives, and would enshrine gender identity as a protected characteristic under the Civil Rights Act of 1964. It would create impossible situations for women in prisons, athletics, and crisis centers. Many women have spoken against it, but are often shouted down.