"We know that the average person crossing brings about 6-8 pounds of trash, so we're talking literally about a million pounds of trash in just one month," he said. 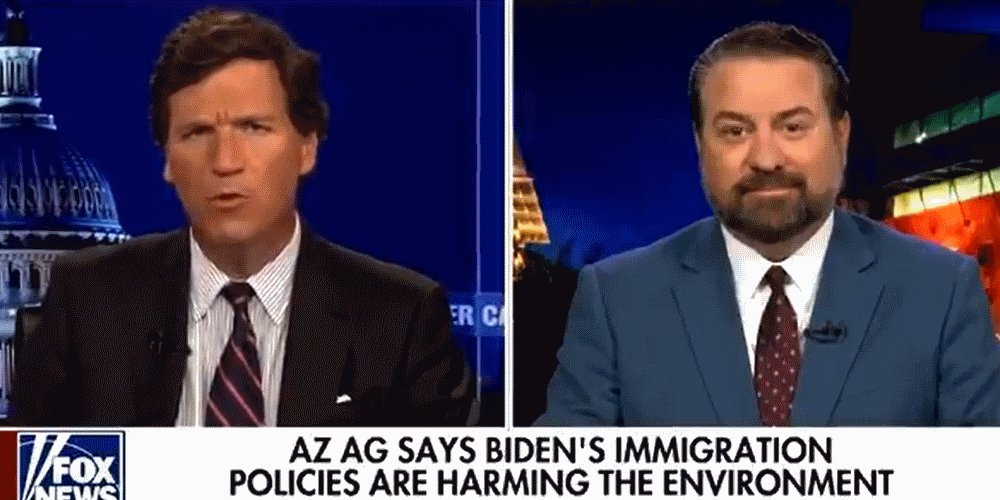 Tucker Carlson spoke with Arizona's attorney general on Thursday night who has launched a suit against the Biden administration's for their handling of the border crisis, which disproportionately impacts Arizona, which shares a border with Mexico.

Carlson said that, in addition to being a humanitarian crisis, the large surge in migrants crossing the US-Mexican border constitutes an "environmental crisis."

"If you care about nature and the actual, physical environment, this is a disaster," Carlson said. "Unregulated waves of people coming in destroy the land and contribute to massive amounts of pollution."

"One person does care, he's the Attorney General of Arizona, Mark Brnovich. He's suing the Biden administration over its immigration policies, and he's saying, among other things, those policies don't comply with the National Environmental Policy Act."

"What effect does unrestrained migration have on the environment of Arizona?" Carlson asked Brnovich.

"Well Tucker, we know that it's estimated that about two million people will cross our border in this country," Brnovich, noting that this is about the population of Nebraska.

"We know that the average person crossing brings about 6-8 pounds of trash, so we're talking literally about a million pounds of trash in just one month," he said.

Brnovich further criticized the environmentalist movement, suggesting that it is an offshoot of Soviet communism designed to "controlling our livelihoods and centralizing power."

"Historically, the left has used NEPA to stop all sorts of developments... And yet, when you literally have millions of people crossing our border ruining migration trails, and then they come here and of course, they're people, migrants are people too, and that means they're gonna need housing, they're gonna need food, they're gonna need transportation," he insisted. "All that has a huge carbon footprint on places like Arizona."

Brnovich insisted that the lawsuit is a win-win situation. "Either we win, and the Biden administration is forced to continue constructing the wall to stop this, and forced to reinstate their remain in Mexico policy, or if we lose, the ninth circuit overturns this, even though they've cared about the environment in the past, we'll have case law that basically says that the federal government doesn't need to comply with federal regulations, and that will maybe that will deter the environmentalist from filing lawsuits in the future."