"Transgender medicine is a very complex and nuanced field with robust research and standards of care that have been developed," Levine replied. 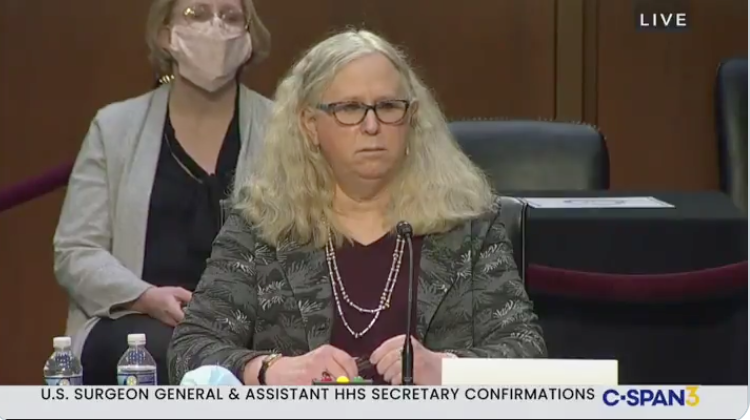 Dr. Rachel Levine, a gender non-conforming biological male who identifies as transgender, fielded questions as part of the Senate committee hearing on her nomination by President Joe Biden to become deputy health secretary.

"Dr. Levine, do you believe that minors are capable of making such a life-changing decision as changing one's sex?" Senator Rand Paul (R-KY) asked.

"Transgender medicine is a very complex and nuanced field with robust research and standards of care that have been developed," Levine replied, promising to discuss the issue further with the Kentucky senator at his office if confirmed.

"The specific question is about minors," Paul said, "let's be a little more specific since you have evaded the question. "Do you support the government intervening to override the parents' consent to give a child puberty blockers, cross-sex hormones, and/or amputation surgery of breasts and genitalia. You have said that you're willing to accelerate the protocols for street kids.

"I'm alarmed that poor kids with no parents who are homeless and distraught—you would just go through this and allow that to happen to a minor. I would hope that you would have compassion for Keira Bell," he said, bringing up the case of a young UK woman who has sued the gender clinic that pushed her through transitioning at a young age.

Paul pressed Levine to disavow the procedures associated with transing children and to say that children should be allowed to grow up. Levine refused to do so, instead repeating her statement about the complexities of transgender medicine.

Paul said with regards to the transgender trend: "American culture is now normalizing the idea that minors can be given hormones to prevent their biological development of their secondary sex characteristics.

"Dr. Levine you have supported both allowing minors to be given hormone blockers to prevent them from going through puberty, as well as surgical destruction of a minor's genitalia. Like surgical mutilation, hormonal interruption of puberty can permanently alter and prevent secondary sexual characteristics.

"The American College of Pediatricians reports that 80 to 95 percent of pre-pubertal children with gender dysphoria will experience resolution by late adolescence if not exposed to medical intervention and social affirmation."

"For most of our history, we have believed that minors don't have full rights and that parents need to be involved," Paul said. "We should be outraged that someone's talking to a 3-year-old about changing their sex."

Levine's commitment to imposing her radical gender ideology on American children should perhaps be of greatest concern to the Health, Education, Labor, & Pensions (HELP) committee, which—like the full Senate chamber—is controlled by Democrats but its membership is split between the two parties.

Senate Health Committee chairwoman Sen. Patty Murray (D-WA) later praised Levine's replies and rebuked her colleague's questions. "It is really critical to me that our nominees be treated with respect and that our questions focus on their qualifications and the work ahead of us, rather than on ideological and harmful misrepresentations like those we heard from Senator Paul earlier," said Murray.

A professor of pediatrics and psychiatry at the Penn State College of Medicine, Levine has given lectures in various settings since at least 2012 on how to perform sex changes and gender conversion therapy on children.

According to Levine, children ought to be given the latitude to choose their own gender. When minors challenge their gender identity, the right course of action is to "try not to force them one way or other," Levine advised parents to "follow the child's lead" in the 2014 article published by Penn State's communications school.

In January, she highlighted a debunked study published in the medical journal Pediatrics that argued that transgender youth with access to puberty blockers have decline in chances of suicide and mental health problems "now and in the future."

"This study is important because it's the first to show this specific association," Levine tweeted last year, linking CNN's report of the Jan. 21 publication.

"At its core, my career has been about helping people live healthy lives," Levine wrote in her opening statement prepared for delivery on Thursday. "I am both humbled by the opportunity, and ready for the job."

Levine emphasized that she has been "invested in health issues that are at the intersection of physical and behavioral health." If confirmed, Levine would have wide influence at the Department of Health and Human Services (HHS).

The position oversees the Office of the Surgeon General, the Public Health Service, and other key public health offices and programs tasked with vaccine policy, women's health, and disease prevention. The leadership role hears from 13 advisory committees ranging from tick-borne diseases to fitness and nutrition.

Levine, who is bidding to be the highest-ranking out transgender official in federal government history, would become the first openly transgender federal official to be confirmed by the Senate.