"Don't you start this sh*t," the man can be heard to say as he ducks under umbrellas to tell the protestors just what he thought of their fourth night of activism. 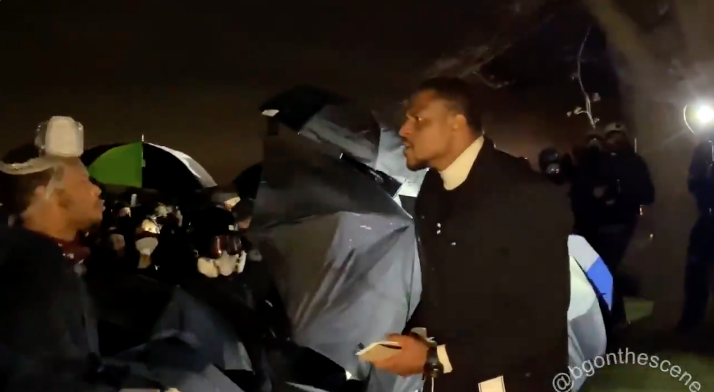 Umbrella-wielding Antifa converged on the Minneapolis suburb of Brooklyn Center, Minn. on Wednesday night, shooting insults and curses at a black man who tried to dissuade them from pursuing their protest.

"Don't you start this sh*t," the man can be heard to say as he ducks under umbrellas to tell the protestors just what he thought of their fourth night of activism.

The footage was captured by Brendan Gutenschwager (@bgonthescene), who has been reporting from the locations of civil unrest across the country since the riots that erupted in the wake of George Floyd's death in police custody in May 2020 in nearby Minneapolis.

"Hey! Hey! Don't you dare, don't you dare!" He told the protestors as they chanted anti-police slogans and tightened their ranks.

"Don't you dare!" He said, waving a finger at them. "Don't you dare start this sh*t tonight!" The man's anger and frustration are palpable as he appears to seek to protect his community from ongoing civil unrest in the wake of the police shooting of 20-year-old Daunte Wright on Sunday.

The officer who pulled the trigger, Kim Potter, has since resigned from her position after 26 years on the force, been arrested, and charged with second-degree manslaughter. Potter said that it had not been her intention to shoot Wright, but to use her taser instead as he resisted arrest during a traffic stop. Wright had a warrant out for his arrest prior to the stop.

"Get the f*ck out of here," the chanting activists yell at the man.

As the man squares off to speak to an angry activist wearing goggles and holding out his umbrella, what appears to be spray is released behind the men.

The scene is one of chaos on the fourth night of rioting in the town.