A member of a CNN camera crew was attacked during a Black Lives Matter riot outside a police station in Minneapolis on Wednesday night. The crew was then forced to flee the area. 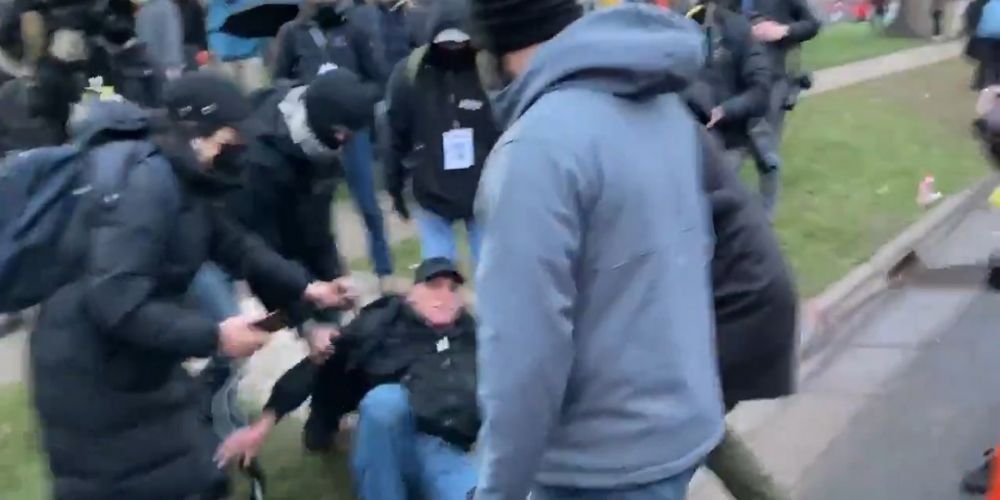 A member of a CNN camera crew was attacked during a Black Lives Matter riot outside a police station in Brooklyn Center, Minn. on Wednesday night. The crew was then forced to flee the area.

A member of a CNN media crew is seen on video getting hit in the face with a water bottle and falling to the ground.

A group of the rioters followed the CNN crew as they were leaving the area taunting and yelling at them and even said, "get the f*ck out of here."

Rioters pelted their car was with water bottles and eggs as they drove away.

CNN was not the only media outlet targeted during the fourth consecutive night of protests and riots since Sunday, after Daunte Wright was shot and killed during a traffic stop while he was resisting arrest.

As the unrest began on Sunday, local authorities implemented a citywide curfew for 8 pm.

Before the mandated curfew, rioters placed barriers in the streets outside the police headquarters building. They carried shielding behind which they hid objects and projectiles to throw at officers and to deflect tear gas canisters and flash bangs from police.

Police were joined by members of the National Guard who had been deployed to nearby Minneapolis for the Derek Chauvin trial, and were redeployed to help Brooklyn Center police. According to reports, the police presence was the largest of any night of the riots so far this week.

Rioters chanted "f*ck the police" and launched fireworks and projectiles at officers. Hundreds of rioters approached the barriers and began shaking the fencing surrounding the building.

The police quickly declared an unlawful assembly gave at least three dispersal orders to the crowd. When the crowd did not comply, police deployed gas in an attempt to move the crowd away from precinct. Officers also launched flashbangs into the crowd.

Officers moved in to arrest the rioters. Authorities also detained members of the media, reportedly to confirm their identities.

Troubles in Brooklyn Center began for CNN on Monday when a bystander walked up to a CNN reporter who was covering the riots and looting and slammed the network live on air riot for their 'media sh*t,' twisting the facts of what was happening on the ground and making a bad situation worse.

Former police officer Kim Potter who said she shot Wright by accident, using her gun when she had intended to grab her taser, was arrested on charges of second-degree manslaughter. Potter was processed and released after she posted a $100,000 bond.