Biden had once said that wearing a face mask was a "patriotic duty." He told an interviewer that if they were "talking to one another close, I'd have my mask on," even if both parties were vaccinated. 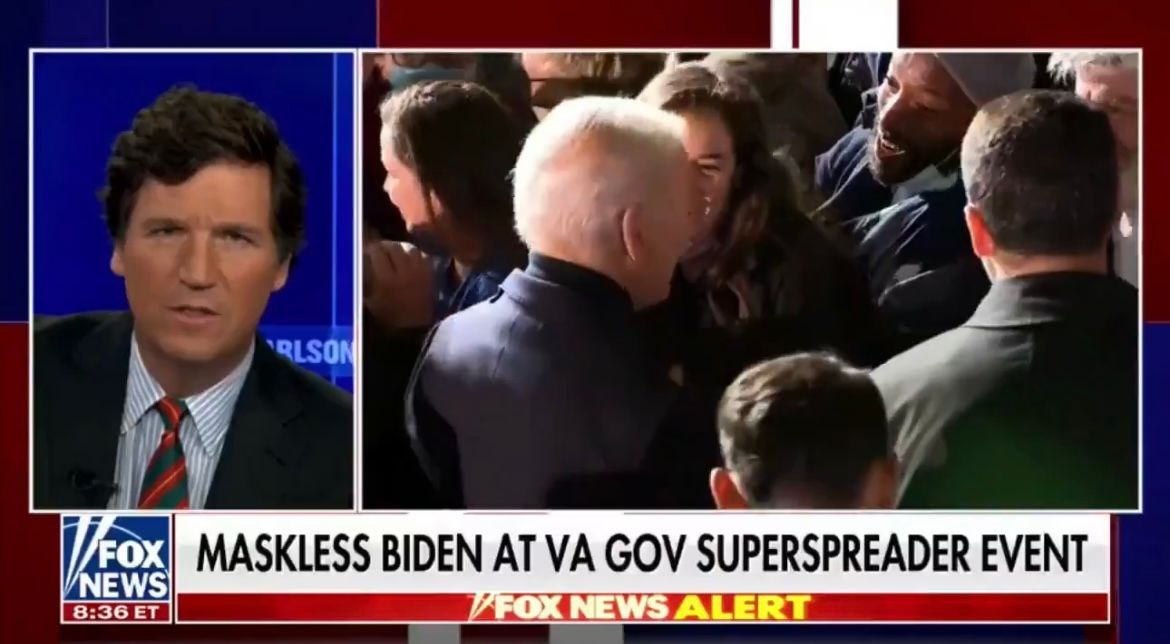 Fox News host Tucker Carlson slammed Joe Biden on Tuesday for not abiding by his own COVID policies while attending a "super spreader event." In a video that his since gone viral, President Biden is seen walking maskless through a large crowd and "breathing all over people" during a campaign event for Virginia gubernatorial hopeful Terry McAuliffe.

McAuliffe is running as a Democrat in a tight race against Republican candidate Glenn Youngkin, and the Democrats have been going hard to get him elected, bringing both Biden and VP Kamala Harris out to stump for the campaign.

"We can't get over those live pictures of Joe Biden breathing on strangers, coughing up phlegm and smearing it on people with his hands," Carlson said.

Biden had once said that wearing a face mask was a "patriotic duty." He told an interviewer that if they were "talking to one another close, I'd have my mask on," even if both parties were fully vaccinated.

"It's a small precaution to take," the President said in April, "that has a profound impact. It's a patriotic responsibility, for God sake."

Just days ago, McAuliffe was under fire after making baseless claims that Stacy Abrams should be the current Governor of Georgia had Brian Kemp not "disenfranchised" voters.

Furthermore, an ethics complaint was filed against White House Press Secretary Jen Psaki for remarks made during a press conference that allegedly went against the Hatch Act.

Psaki told reporters that the Biden administration is going to do "everything they can" to help former Governor McAuliffe win."

The Hatch Act bars employees in the executive branch to use their authority and influence to interfere with the results of an election.