Kirk criticized Biden's decision to target his political rivals while failing to mention the major issues facing the nation. 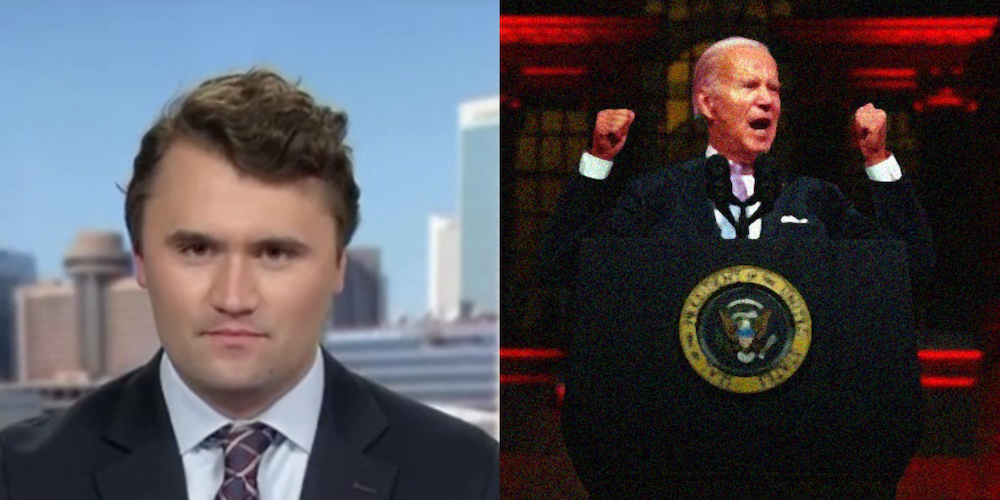 On Thursday, President Joe Biden delivered his so-called "Soul of the Nation" address outside Independence Hall in Philadelphia, Pennsylvania. Instead of hope and unity, however, Biden preached division, repeatedly targeting Donald Trump and "MAGA Republicans."

Kirk began by criticizing Biden's decision to target his political rivals while failing to mention the major issues facing the nation.

Kirk also pointed out the "very creepy authoritarian visual of all red" lighting that emanated from Independence Hall.

"None of this was by mistake," he suggested. "All of this was intentional, and the message is very clear: 'I don't care about the wellbeing of the American people; we are going to launch an offensive campaign against the opposition political party, against dissidents, against people who disagree with me'."

Kirk went on to accuse Democrats of twisting the word "democracy" to fit their political goals.

"If they actually meant representative government," he said, "that's the MAGA movement! It is grass-roots, it is people-centred, it is school boards, it's city council meetings, it's small-dollar donations ... If anyone were ever to embody the jersey of democracy, it would be the MAGA movement, and that's why Joe Biden is so afraid of us."

Hegseth and Kirk then discussed what MAGA Republicans should do in response to Biden's words. They called on people not to "take the bait," and to instead remain calm and work towards winning the next elections.

Kirk stated that the days of "Republican business as usual" are over, and that "a new Republican is coming to Washington, DC."

During his speech, Biden suggested that MAGA Republicans "represent an extremism that threatens the very foundations of our republic."

He also accused them of living in a "shadow of lies."

About half way through the speech, some Republicans had enough and heckled Biden, chanting "Let's Go Brandon!"