Dr. Nadia Dowshen claims that preventing a child from going through puberty will give them "a better quality of life," and praises Biden's trans DHHS assistant secretary Rachel Levine. 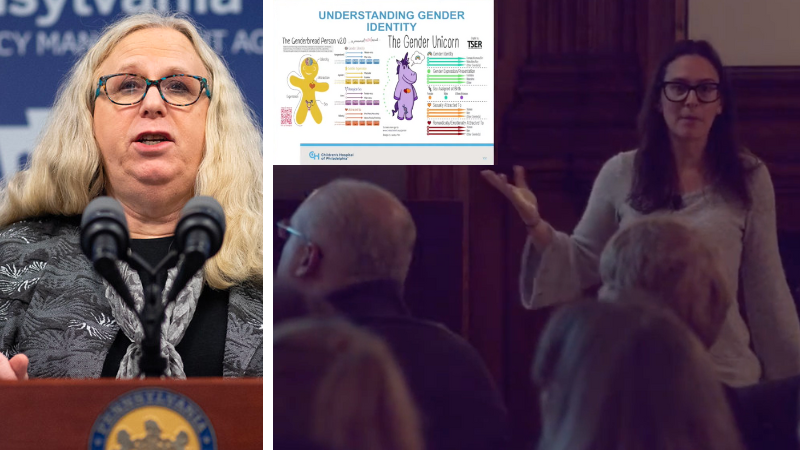 Libby Emmons Brooklyn NY
Oct 4, 2022 minute read
ADVERTISEMENT
ADVERTISEMENT
A clip of Dr. Nadia Dowshen giving a talk on medicalized gender transition for minors emerged on social media on Monday, in which she discussed how important she beleives it is to give puberty blockers to kids. Dowshen claims that preventing a child from going through puberty will give them "a better quality of life."

She touted Dr. Rachel Levine's efforts as the Secretary of the Pennsylvania Department of Health, saying that Levine, who is a biological male that identifies as trangender and transitioned as an adult, after having children and a marriage, is a great ally for "trans youth." Levine has pressed for insurance coverage for medical gender transition both at the state and federal level.

The short clip comes from a lecture called "Understanding Gender Identity and Development in 2018," part of the "CHOP Office of Diversity & Inclusion Lecture Series."

"If we block their puberty right away, we can prevent them from ever developing breasts. And that means they would have a better quality of life. And they might not need to have top surgery in the future," she said.

By "top surgery" she means the double mastectomy of a girl's healthy breasts before she's had a chance to fully develop them, comprehend them or imagine motherhood.

Dowshen gave a case study to explain what she meant, using for her example a young girl who is "assigned female, but identifies as male," who find that they start to develop breasts, as part of the natural process of adulthood. She suggests the use of puberty blocking drugs, stating that "the benefits of these medications are that we can delay irreversible secondary sex characteristics."

"If we can block their puberty right away, we can prevent them from ever developing breasts and that means they would have a better quality of life and they might not need to have top surgery in the future. Right. So those are one example of the benefits," she said.

"The benefits," she said are that "they're fully reversible."

For Dowshen, listening to children and teens who don't want to grow up is really important for their "gender journey." The FDA has said that puberty blockers are dangerous, and the drug maker does not recommend use for more than three months. Brain swelling, vision loss, stunted growth, cognitive issues, bone density loss, and other problems can result from puberty blockers. These drugs, combined with cross-sex hormones, can lead to sterility and a lack of sexual function. These conditions are not reversible.

"Most of the time, the young people that we take care of, they know exactly who they are and what they want. But a lot of times it takes a while for the medical providers and the mental health providers and the parents to get on board with who the young person is. So the nice thing about these medications is that they allow the young person the time to not have to go through puberty that they don't want to while they are maturing and their other folks around them are maturing and able to decide that they can make decisions for themselves with treatments that are less reversible," she said.

"What are the sort of risks or downsides of puberty blockers? We do know that there's some effect on bone mineral density when we don't have hormones on board and so, for that reason, you know, we will try to keep focus on the puberty blockers for the minimal amount of time possible. And we do know that once we start focusing on cross gender hormones or let them go through the puberty of the sex they were assigned at birth, that their the bone density will return to normal," she said.

She also spoke about how great it is that puberty blockers will stunt the growth for males who seek to transition to female, so that they don't have to be "the tallest woman in the world."

"The other major downside of these medications is that they're extremely expensive," Dowshen continued. "And there are many challenges with insurance coverage that we could talk about this piece for days. But the good news is that things in general are getting better."

Levine talks about how important Levine's children are to Levine, and how if Levine had undergone medical gender transition as a teen, Levine would have been sterilized, and would never have had the chance to father children. Levine therefore has no regrets about Levine's later-in-life transition, though Levine advocates for sterilizing medical treatment for teens.

"And especially in the state of Pennsylvania, we have a really wonderful advocate at the state level, our physician general the highest position in the state. Dr. Rachel Levine, who is an adolescent medicine doc like me, and who is a transgender woman and she has been doing amazing work to ensure that young people have coverage of these medications," Dowshen said.

Levine is Biden's Assistant Secretary in the Department of Health and Human Services, and has declared that it is discriminatory for health insurance companies to not cover medical gender transition drugs and surgeries.

Dowshen also discussed engaging in fertility treatment with gender dysphoric youth, saying that since "we don't know what the outcomes might be" for drugs like puberty blockers and cross-sex hormones, she encourages "banking eggs or sperm" of teens.

For surgeries, Dowshen said that "The most common surgery that transgender individuals have is top surgery or masculinizing chest surgery."

Dowshen, co-founder of the gender clinic at the esteemed Children's Hospital of Philadelphia, has been advocating for the medicalize gender transition of children and teens for years, claiming as her advocate Dr. Rachel Levine, now Biden's trans Assistant Secretary of the Department of Health and Human Services. Levine's former post was as secretary of the Pennsylvania Department of Health.

She spoke about her belief that Pennsylvania's state-funded insurance program for children should cover what they call "gender affirming" medical treatments, such as drugs to block natural pubertal development, the administraiton of cross-sex hormones, and surgeries that alter face and throat, remove or augment breasts, or those that mutilate genitals.

In a hearing before the state senate in September 2020, Dowshen made the false claim that puberty blockers are completely reversible. "The major medical intervention that is considered fully reversible is puberty blocking medication," she told the Pennsylvania state senate.

"These medications are only given when a child has already started puberty, which can be distressing to youth with gender dysphoria, and has displayed insistence, consistence and persistence in their gender identity. Again, these decisions are made together by the care team, youth, and parents. This is a very safe medication that had been used for many decades previously for children who are starting puberty too early or what is referred to as precocious puberty."

Levine and Dowshen both have advocated for insurance companies to cover medicalized gender transition for children and teens.
ADVERTISEMENT
ADVERTISEMENT
levine dowshen