"Critical race theory," Swain said, "argues that white people are oppressors, that all people with white skin are privileged, they have a property interest in their whiteness, and that racism is permanent." 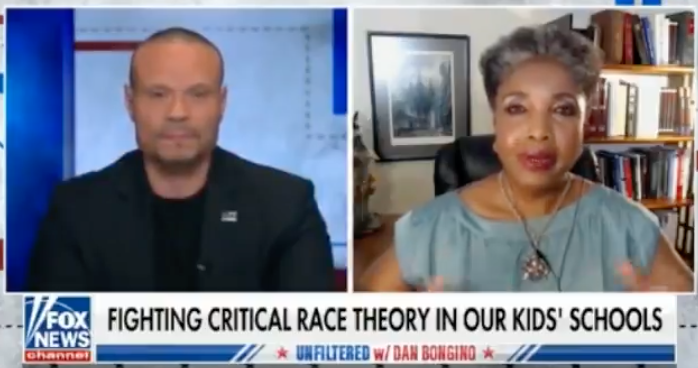 Dan Bongino tackled the increasing problem of indoctrination of children in American schools on his latest episode of Fox Nation's The Dan Bongino Show. Bongino talked to Dr. Carol Swain, who was part of President Trump's 1776 Commission, about just how long critical race theory, and critical theory in general, has been coming down the pike.

Swain noted that it has been in the universities since the 1970s, beginning at the prestigious Harvard University. "It escaped the university campuses," Swain said, "and it's now infecting K-12 education at public and private schools. Christian as well as secular schools, and every sector of our society including the US military."

"Critical race theory," Swain said, "argues that white people are oppressors, that all people with white skin are privileged, they have a property interest in their whiteness, and that racism is permanent."

"Did you notice that the advocates of critical race theory—which is racist," he replied, "and I'm sorry, if you support it," he told viewers, "you're a racist too. Suggesting we judge people by their skin color is the essence of racism. But did you notice they live in euphemisms?" He asked Swain.

"And they play these games, these obfuscation games. They can never describe exactly what they're talking about," Bongino said, bringing up Ibram X. Kendi's definition of racism.

Kendi defined racism as "a collection of racist policies that lead to racial inequity that are substantiated by racist ideas."

Bongino said that this is not isolated to Kendi, and that when he asks for a definition of systemic racism, he finds that most of the systems that are being discussed "are in fact run by liberals."

"The problem is," Swain replied, "it's indoctrination that they memorize these concepts and they have no clue what it means." She said this is now through kindergarten up through the university level. "No critical thinking is taking place," she said, "and they don't have to define their terms unless they are asked by a conservative, and none of them can."

"Critical race theory is racist," Swain said, "and I see it as the civil rights issue of our time. I'm proud of President Trump for leading the battle, because he does have a big platform."

Swain noted the executive order that Trump signed in September 2020, that banned critical race theory in government agencies and for companies that contract with the federal government. Biden overturned the order as soon as he stepped into the Oval Office in January.

"Critical race theory runs contrary to the Civil Rights Act of 1964, our civil rights laws, our constitution's equal protection clause, and just how we treat other Americans. We don't shame and bully and intimidate people because of the color of their skin or their nationality or whether they are male or female," Swain said.

"Critical theory encourages us to divide and to really hate each other and to fight over things we really should not be fighting over. It dumbs down education and it hurts minorities the most," she concluded.