"When members of Congress endorse the QAnon theory, doesn't that worsen the threat of violence?" Blumenthal asked. 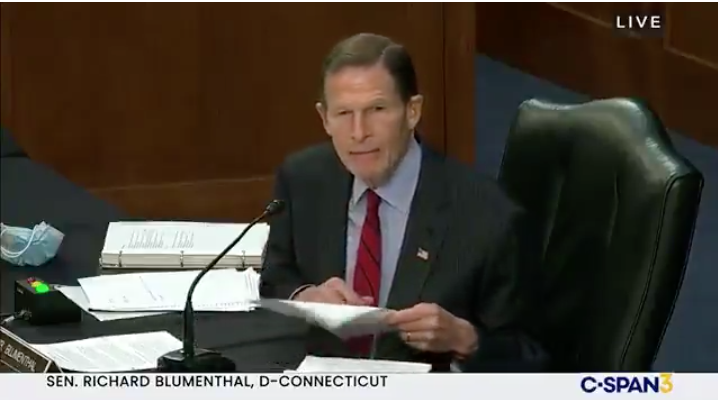 In questioning FBI Director Chis Wray, Senator Richard Blumenthal (D-CT) asked about QAnon, saying that it is a great threat to American democracy.

"We have warned specifically about QAnon in a letter," he said, "dated December 8, 2020, a number of us, members of the senate, warned that QAnon specifically was a threat. I would like to ask you whether the threat posed by QAnon, and as you well know, the adherents of QAnon were among the rioters, very prominently, who stormed the Capitol, whether the continuing threat is worsened by prominent elected officials, including members of Congress, endorse the QAnon theory."

"Well certainly we are concerned about the QAnon phenomenon," Wray replied, "which we view as sort of a loose sort of set of conspiracy theories and we've certainly seen domestic violent extremists of the sort that you're describing who site that as part of their motivation—"

Blumenthal interrupted, apologizing, asking "When members of Congress endorse the QAnon theory, doesn't that worsen the threat of violence?"

"Well again our focus is on the violence, and on the plans to commit violence, the threats to commit violence, it's less on the rhetoric and the ideology," Wray said. "Obviously the folks who engage in this kind of violence draw inspiration from a variety of sources. And we're concerned about any source that stimulates or motivates violent extremism."

Blumenthal was not convinced. "I am frankly disappointed," he said, "that you're not discouraging one of the sources, which is prominent public officials endorsing a theory that in turn resulted in storming the United States Capitol."