The shirt in question bore the phrase "get your knee off our necks," inspired by the viral video of George Floyd's death, where former Officer Chauvin could be seen with his knee on Floyd's neck. 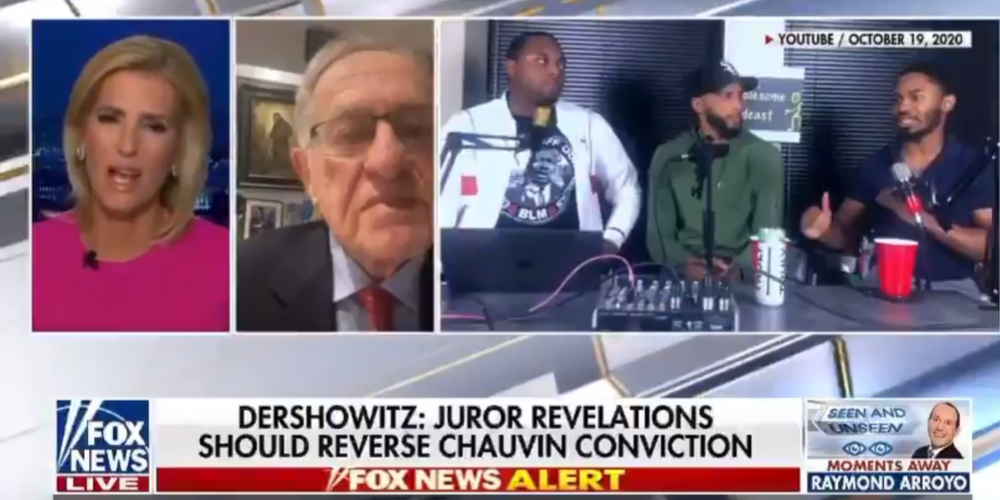 Laura Ingraham spoke with attorney Alan Dershowitz spoke on the recent revelations about juror #52 in the trial of Derek Chauvin for the murder of George Floyd. Juror #52  had been discovered on Facebook at an event in Washington DC sporting a BLM shirt.

That juror has identified himself as Brandon Mitchell, 31, and the photo emerged on Facebook from a protest march in Washington in August where he sports a BLM shirt. Prior to serving on the jury, Mitchell had told Judge Cahill that there was no reason he could not be impartial. The existence of the shirt could prove otherwise.

The shirt in question bore the phrase "get your knee off our necks," inspired by the viral video of George Floyd's death, where former Officer Chauvin could be seen with his knee on Floyd's neck.

Mitchell wore that shirt to the anniversary of King's "I have a dream speech" in Washington, DC in August, and though he said he doesn't remember it, Ingraham showed a screenshot of an Oct. 19, 2020 podcast where Mitchell wears the shirt again.

"It seems like this guy was relishing this opportunity, and again 'interested in making history,'" said Ingraham.

Dershowitz questioned whether Mitchell had remained impartial during the trial.

"Can you imagine if he had been on the jury and the jury had acquitted? Would he be publicly identifying himself? It's obviously a jury that wasn't identified, he made the decision to identify himself. He's proud of the verdict he helped to render," said Dershowitz. "I just don't think we can be assured that objective neutral justice was done in that case."

Ingraham pointed out the media's silence after this revelation in the case, stating that media coverage would be different if someone was discovered having attended the January 6 Capitol Hill riot.

"Imagine if Chauvin was acquitted, and someone on the jury had attended the Capitol riot on January 6 or something... There would be at least an uproar in the media about it, but here it's kind of a big yawn," said Ingraham.