WATCH: D'Souza, Dhillon slam Biden's claim that election integrity laws are biggest 'test of our democracy since the Civil War' 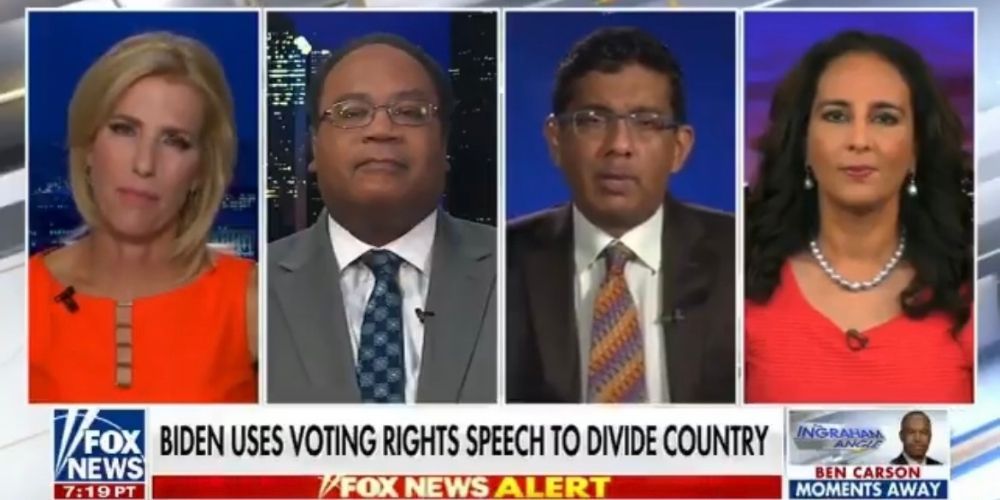 They also took aim at President Biden's claim that election integrity laws are the biggest "test of our democracy since the Civil War," and mainstream media's fawning praise of these assertions.

On Monday, Texas Democrats' fled to Washington DC in an effort to block a GOP-backed election integrity bill from passing in the House.

"There's a legitimate Republican majority in this state. Biden himself said that the minority party needs to patiently acquiesce in the will of the majority. That's not being done in Texas," D'Souza added.

Lawyer Harmeet Dillon weighed in and mentioned that more than 78 percent of American voters support implementing voter integrity laws, said "it's not even close" as she questioned why Texas Democrat lawmakers are subverting a democratic process.

Dhillon also questioned who is financially supporting the Texas Democrats' seemingly luxurious trip to Washington DC, asked who is paying for their hotel rooms and basic necessities, like food and drink.

"We don't know what dark money forces are paying for this or what they're expecting in return. So this is thoroughly corrupt," Dhillon said. "It stinks."

Adding, "In a way it would actually be better if taxpayers were paying for it, because it would be accountable."

The panelists went on to slam mainstream media's reporting on President Biden's "Brilliant" voting rights speech and mocked Biden's speech for comparing his against voter integrity laws to the Civil War, a war in which 600,000 Americans died.

"I think that Biden in a way missed a huge opportunity. What he needed to do, I think is lay out the argument and say, look, we need to have laws that on the one hand, make it easier to vote, but harder to cheat," Dinesh D'Souza expressed. "Presumably that is going to be the criteria for any decent voter integrity law."

"For the Democrats, it's all about making it easier to vote and they paid no attention to the cheating issue, presumably because they believe that cheating is part of what they need to get them to the finish line," D'Souza said Tuesday night on Fox News' Ingraham Angle.