"Throwsa Parks," Von quipped, "That's what I call that dude." 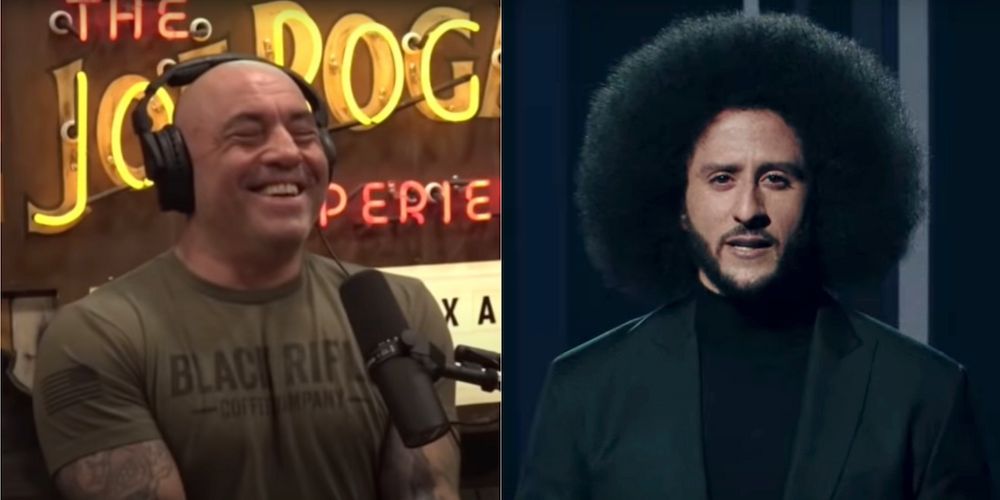 On a recent episode of The Joe Rogan Experience, Rogan and comedian Theo Von tore into Colin Kaepernick's Netflix special. In the special, Kaepernick compares the NFL combine, during which players are examined and have their skills tested, to slavery, arguing that it's essentially the same.

"Throwsa Parks," Von quipped, "That's what I call that dude."

"It is the dumbest comparison," Rogan said, with Von adding that it's so absurd that it's "almost infantile."

"It takes away from real racist sh*t," Von continued.

Rogan went on to point out that unlike slavery, becoming an NFL player is a choice one makes for themselves, and playing the league is actually a dream of many, and often leads to making millions of dollars. "Imagine comparing that to slavery, simply because they measure peoples' physical performance ... That's to see how physically adept you are; how good you're gonna be at football so they'll give you tonnes of money. The idea that this is comparable to slavery..."

"What the f*ck are you talking about?" Rogan said, recalling a scene in which white NFL owners and slave masters are shaking hands while being compared to one another.

Rogan and Von went on to talk about how Kaepernick's ideas actively diminish the work NFL players have put in to get there.

"No one watched that and went 'Yeah'," Rogan concluded. "If they did, they need to go to a doctor ... Have a seat on the couch."

Kaepernick, an NFL player-turned-activist who popularized the notion of "taking a knee" on the field rather than standing with hand over heart for the American national anthem, has not played in the league since 2017.