WATCH: Kari Lake says she will be the 'fake news' worst nightmare' for 8 years as Arizona governor 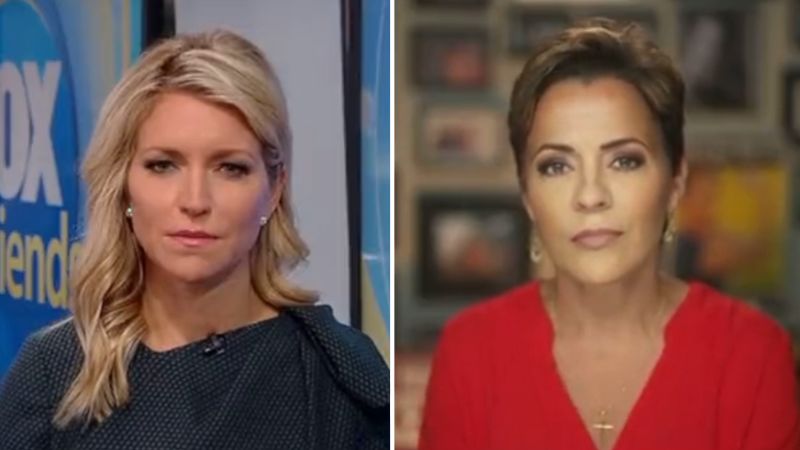 Arizona Republican gubernatorial candidate Kari Lake appeared on Fox & Friends Monday morning and told host Ainsley Earhardt that establishment media is trying to "scare the voters" and she promises to be their "worst nightmare" as governor.

Earhardt had asked her about media reports that she is potentially a running mate for Donald Trump's 2024 presidential campaign and Lake responded, "They were saying I didn't have the skills to run for office. And now all of a sudden 'whoa,' I'm so skilled that I might be running for vice president. I think they're trying to scare the voters. I really do."

"I think they're trying everything to bring us down," Lake added.


Lake has been consistent in confronting establishment media in the face of biased questions or misleading assertions.

On October 16, Lake appeared on CNN's State of the Union and spoke with Dana Bash. During their exchange Bash made a misleading comment about illegal immigration and said, "DHS says that less than 1 percent of migrants encountered at the border have a criminal record."

Lake, a former journalist, immediately replied, "I'm gonna have to disagree with you on that figure you just put out. We have a million 'gotaways.'"

Border security in the wake of Biden's immigration humanitarian crisis has been a central part of Lake's campaign. Correcting Bash about the criminals pouring over the southern border was something Lake was praised for by her supporters.

Earhardt was not the first media figure to question Lake about a potential Vice Presidential position. In September, Lake was speaking with reporters after an Arizona Chamber of Commerce forum and was asked about running with Trump.

"It's funny though that that question is asked because for so long many of you in the media have been trying to act like I don't have the skill to run for governor, now apparently I'm so skilled that you think I should be VP," Lake replied. "So I take it as a compliment. Thank you for asking. Thank you for asking,"

Lake also took local AZ Media to task for running a hit piece on her daughter over the summer.

In another exchange, Lake agreed to do a CNN interview so long as it appeared on CNN+.


In her interview with Earhardt, predicted big wins for the GOP in November and said, "We have lots of big issues and the Republicans have all of the solutions."