"Well, none of us has the skill set that Joe Biden has," Steyn said of Biden's "accomplishments." This after President Biden falsely claimed on Wednesday that he "used to drive an 18-wheeler, man." 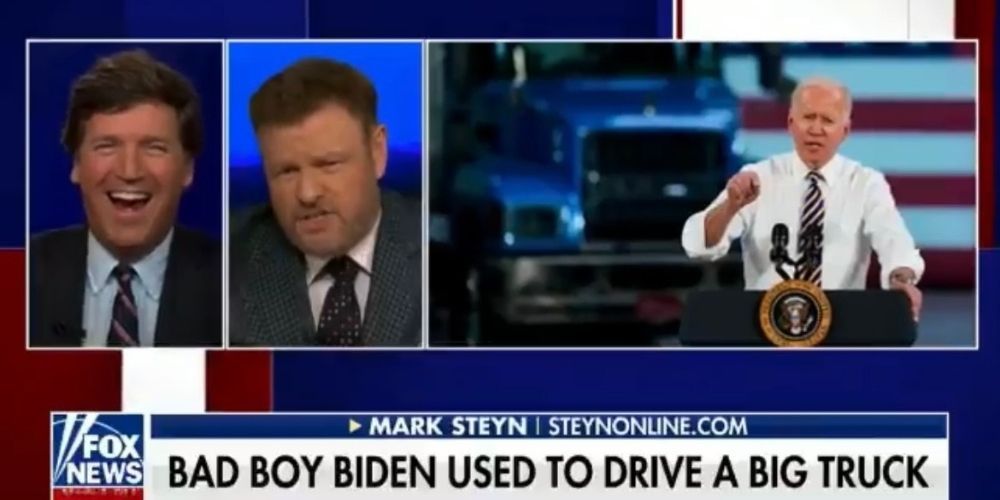 "Well, none of us has the skill set that Joe Biden has," Steyn said as he poked fun at many of Biden's "accomplishments." This after President Biden falsely claimed on Wednesday that he "used to drive an 18-wheeler, man."

The examples of Biden's many claims in life, Carlson mentioned, include Biden claiming to have been a "hard coal miner" in Scranton Pennsylvania, a civil rights leader when he allegedly went down to South Africa to free Nelson Mandela, and the time President Biden claimed to have "whipped Corn Pop's sorry a** with a chain."

"He has a very rich life and nothing, none of his fantasies, are as insane as the reality of putting the defense secretary in a plexiglass helmet as if you're going to project him into space," Steyn said of Biden's many outrageous allegations.

"Joe Biden is bored by policy. He can't finish sentences even when he's got people in his ear piece telling him the words to say, he tails off in the sentences," Steyn said.

"You know, if he starts talking about the economy and you suddenly say to him, 'remember when you and Corn Pop in that 18 wheeler and you had to dynamite the mountain pops in Fulton county, Georgia because the Republicans were trying to get through so they could audit the ballots there. And you had to dynamite the whole thing with your 18 wheeler full of credit cards from the first national bank of Wuhan' and suddenly Joe Biden springs to life."