Republican reps. Matt Gaetz and Marjorie Taylor Greene paid a visit to the DC Correctional Facility demanding answers regarding Jan. 6 prisoners, only to be locked out. 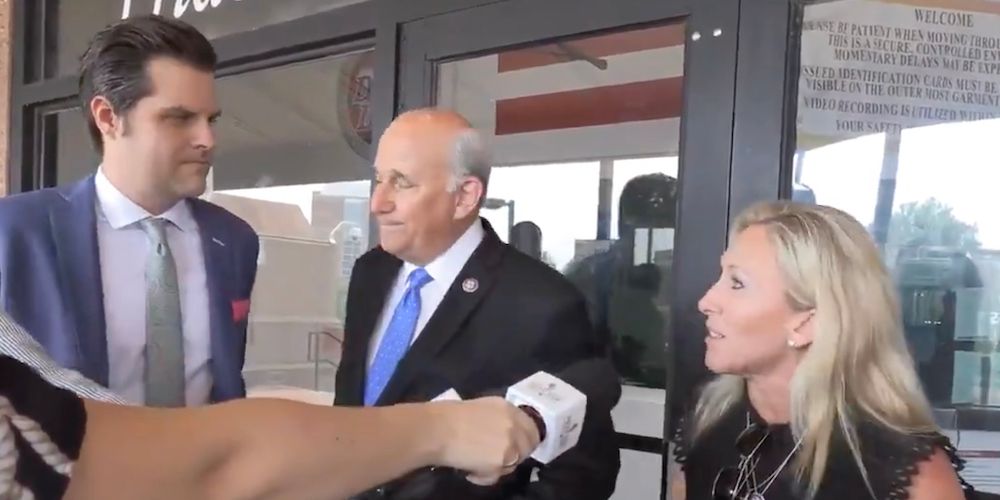 Reps. Matt Gaetz and Marjorie Taylor Greene paid a visit to the DC Correctional Facility demanding answers and access regarding Jan. 6 prisoners, only to be locked out.

Reps. Gaetz and Greene have taken it upon themselves to investigate the conditions of rioters being held in prison. On  Tuesday, they held an event outside the Department of Justice, however it was promptly shut down by leftist protestors. In what little time she was able to speak, Rep. Greene stated that they would not back down in their search for truth.

On Thursday, Reps. Gaetz and Greene took to the streets yet again, this time making their way to the DC Correctional Facility, where some of the Jan. 6 prisoners are being held.

"We're not the type of members of congress who just go away," Rep. Gaetz said from inside the facility. "We're going to continue to show up and press these issues, because whether it's access to evidence, or treatment of people, we have a job to do here."

According to Rep. Gaetz, the group then left the correction facility to meet with a prison supervisor outside, and as soon as they exited, "they literally ran behind us and locked the doors so that we wouldn't have the opportunity to present our ID and seek a review."

"They don't want anyone to know what's happening inside," Rep. Greene added.

After trying unsuccessfully to re-enter the correctional facility, the group held a press conference nearby to convey their thoughts.

"We went to this prison today as members of Congress," Rep. Greene began, "to give oversight on a federal prison because we suspect there is a two tiered justice system in the United States."

She went on to decry the apparent double standard being applied to "Trump supporters that are charged for January 6th," pointing out that Black Lives Matter and Antifa rioters are often simply caught and released by police.

Rep. Gaetz took to the podium next, slamming the federal government. "How does the Biden administration expect us to participate in the representative republic when they deprive us of access to information that would inform our oversight work, and our appropriations decisions?"

"The questions we've asked," he continued, "have gone unanswered for months. First, are there defendants, as a consequence of their conduct on January 6th, being deprived of access to potentially exculpatory evidence?"

"To answer that question, we need access to the 14,000 hours of hours of videos that Congressman Gossar has continuously called for. To get that evidence, we sought a meeting with the Attorney General, we went to the DOJ, and we weren't even allowed in the lobby to have a meeting with an Attorney General ... What is Merrick Garland hiding?"

Rep. Gaetz then said that their second area of concern was the specific treatment of detainees. "To get answers," he said, "we showed up at the facility and sought a tour ... Now there is an unprecedented effort to deny members of Congress information that relates to criminal cases, and that relates to the treatment of people that are held."