WATCH: MP bashes Trudeau for hanging out maskless with elites while Canada struggles 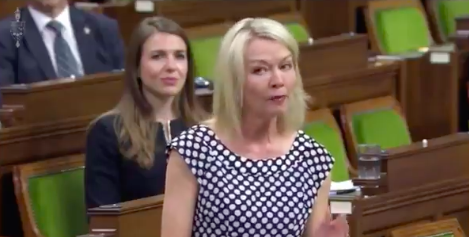 Conservative MP Candice Bergen spoke in Parliament on Monday, where she asked if Prime Minister Justin Trudeau was enjoying his laid back weekend in England while Canada bleeds jobs. Trudeau has been photographed maskless and carefree enjoying wine and cheese during the G7 summit.

Bergen said in Parliament, "What a weekend our Prime Minister had in the U.K. hobnobbing with the rich and famous. He seemed to have forgotten his mask a few times and he won't have to quarantine like everyone else when he gets home because after all, there's one set of rules for our Prime Minister and one set of rules for everyone else." Bergen is referring to the fact that Trudeau will have special accommodations arranged in Ottawa when he arrives home, instead of having to fly into Montreal, Toronto, Calgary or Vancouver like all other Canadians, including Cabinet Ministers, are forced to.

Bergen continued, "While he was enjoying his wine and cheese, back here in Canada, our economy is shedding jobs, supply chains are crumbling, and housing prices are skyrocketing. Instead of trying to impress his celebrity friends, why isn't the Prime Minister focused on getting Canadians back to work?"

Canada lost 207,000 jobs in April and 68,000 more jobs in May. This makes Canada unique as across the world countries like the United States are selling more jobs than there are workers as the country rushes into reopening. Many blame this on Trudeau's vaccine plan (or lack there of) and continued provincial lockdowns despite the science turning a corner.