WATCH: Police cite customers for trespassing after they refuse to wear masks in Washington grocery store

"I've seen less cops on a drug raid," a retired detective said of the mask-wearing enforcement in Vancouver, WA. 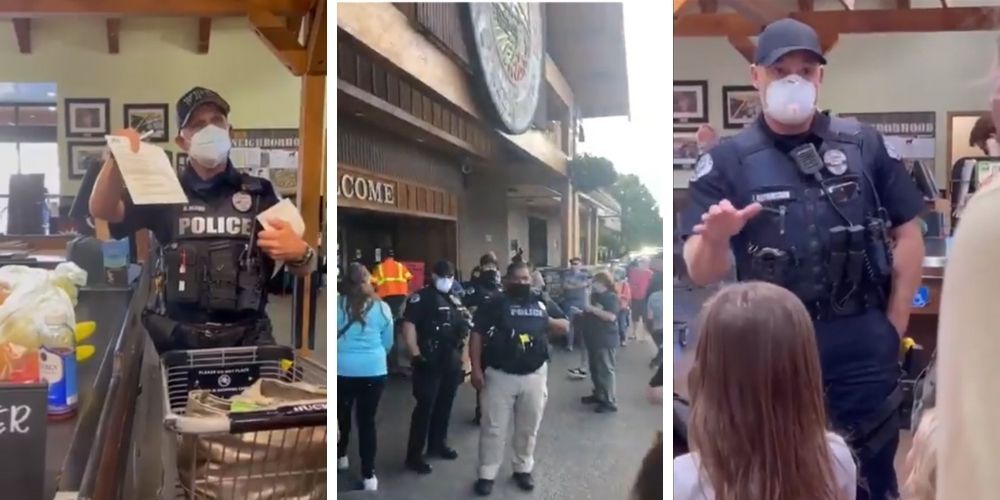 The video showed a confrontation between a woman and an officer who stood next to a store employee at Chuck's Produce & Street Market at Mill Plain. The officer wrote on an official form.

A person off camera can be heard saying, "This is America. Are we going to be like Australia soon?" The person then sarcastically asks if they would be allowed to not wear a mask if they sat on the floor and drank water, like they were in a restaurant.

The woman who was cited told the officer that she was just trying to get food for her family. Other patrons, also without masks, can be seen in the video.

In another video an officer can be heard saying to customers, "They don't want to do business with you and they have asked you to leave." A third video shows five other officers preventing access to the entrance of the store.

In a statement to The Post Millennial, the Vancouver Police Department said that officers were called to the business after a female refused to leave the store after being asked by store employees several times.

She was issued a trespass notice by police for refusal to leave the store property, according to Vancouver PD, even though the department also stated that a citation was not issued. They said this incident was a response to a request to trespass a person from a business that the business determined they did not want there.

The department added that the business also chose to close temporarily after the incident and would not allow customers inside the store. VPD officers assisted store employees inform customers who wanted to enter after the store closed that they could not enter at that time. Chuck’s Produce & Street Market did not return requests for comment.

According to a statement regrading the incident received by the Lars Larson Show, which first obtained the videos, 10 officers were dispatched to address the incident.

A retired detective who sent the videos to Larson said, "I've seen less cops on a drug raid."

According to public data, Vancouver, Washington has one of the highest crime rates in the entire US. The chance of becoming a victim of either violent or property crime in Vancouver is 1 in 29. According to FBI crime data, relative to Washington, Vancouver has a crime rate that is higher than 79 percent of the state's cities and towns of all sizes.

This story was updated to reflect that officers said that people were not cited for not masking, but were trespassed.