WATCH: Sen. Sinema accosted by activists at ASU who follow her into the bathroom

Senior Sen. Kyrsten Sinema (D-AZ) was followed by a small group of activists as she was leaving Arizona State University on Sunday. They followed her into a bathroom where she locked herself in a stall and they still wouldn't leave her alone. 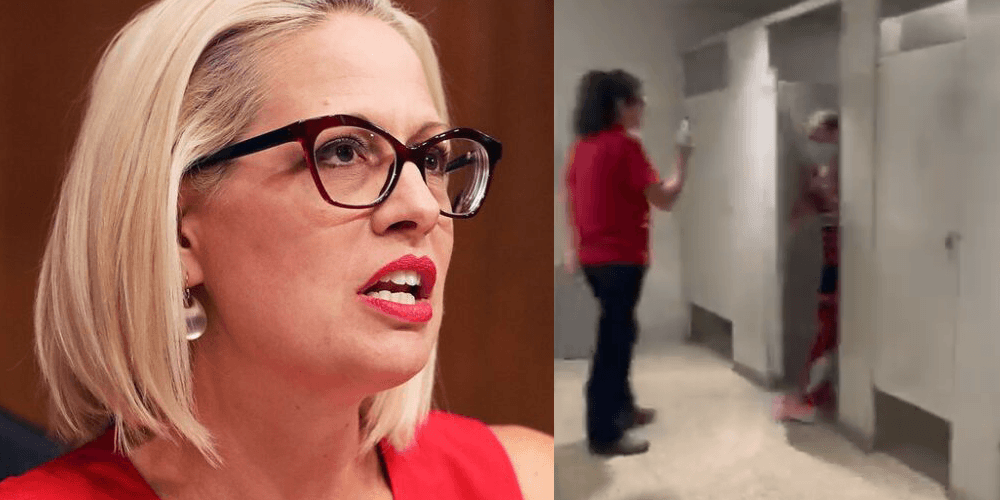 Senior Sen. Kyrsten Sinema (D-AZ) was followed by a small group of activists as she was leaving Arizona State University on Sunday. They followed her into a bathroom where she locked herself in a stall and they still wouldn't leave her alone.

"A crowd of insurrectionists just chased Senator Sinema into a bathroom at ASU screaming at her while she hid in a stall. No @CapitolPolice in sight for the female Senator," wrote journalist Jack Posobeic:

In the below video, which is believed to originally have been uploaded to the Twitter page of a BLM-umbrella organization, called Living United for Change in Arizona , or LUCHA. According to their Twitter page, the org "is led by community members fighting for social, racial & economic transformation."

"Senator, we wanna talk to you right now. Can we talk to you real quick?" first asks a male voice off-camera.

"Actually, I am heading out," replied the senator, as she headed to the bathroom.

"But, right now is a real moment that our people need in order for us to be able to talk about what's really happening. We need a 'Build Back Better' plan right now," the man continues, referring to a $3.5T spending bill that is currently being hotly debated in Congress.

As Sen. Sinema continues to the bathroom stall, she is followed by a small group of people, including the same male. They continue to ask about the same plan, with a female voice then saying "we knocked on doors for you to get you elected. And, just how we got you elected, we can get you out of office if you don't support what you promised us."

"My name is Blanca," she continued. "I was brought to the United States when I was three years old. In 2010 both my grandparents got deported because of SB1070. My grandfather passed away two weeks ago and I wasn't able to go to Mexico bc there is no pathway to citizenship."

"This is the opportunity to pass it right now, and we need to hold you accountable to what you promised us that you were going to pass when we knocked on doors for you. It's not right."

Another female comes forward to accost Se. Sinema as she is washing her hands, telling her she is "a survivor of human trafficking," among other things.

Activists appear to be focusing in on the ASU campus, as on Sept. 24, another video surfaced of white students being chased out of a "multicultural" space.