The Babylon Bee penned a satire naming Dr. Rachel Levine, Biden's assistant HHS secretary, a biological male who identifies as a woman, "Man of the Year." This was the suspendible offense. 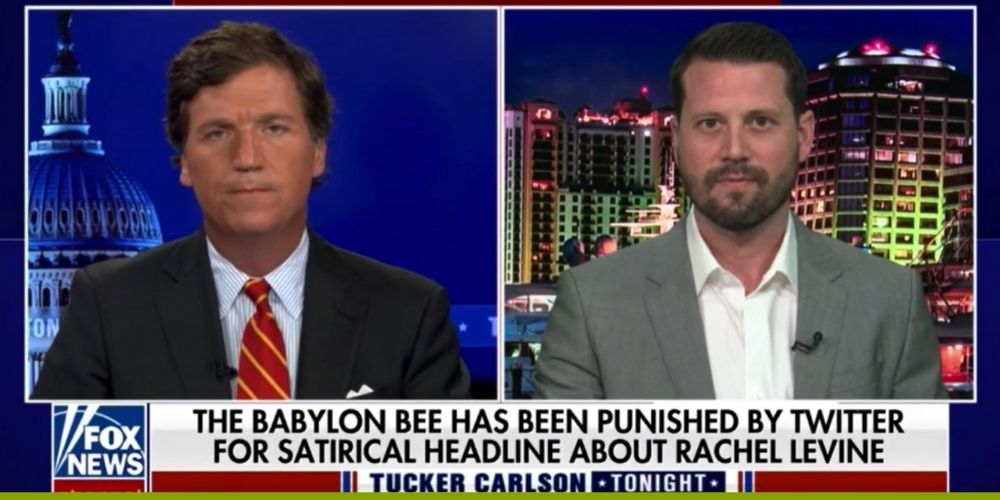 The Babylon Bee tweeted about Department of Health and Human Services Assistant Secretary, Dr. Rachel Levine, who was named "Woman of the Year" by USA Today despite being a biological male. Levine self-identifies as a woman. The Babylon Bee penned a satire naming Levine "Man of the Year." This was the suspendible offense.

Twitter said the Bee's account was suspended for "violating the Twitter Rules" against "hateful conduct, citing the hateful conduct policy which stipulates that Twitter users "...may not promote violence against or directly attack or threaten other people on the basis of race, ethnicity, national origin, caste, sexual orientation, gender, gender identity, religious affiliation, age, disability, or serious disease."

Dillon responded, "No, we’re not. It’s like asking us to say 2+2=5. We’re sitting here looking at this email that tells us in order to reinstate our account and get access to be able to tweet again, we’ve got to delete this tweet. And the tweet’s a joke, that’s the first thing to get straight here. This is satire, it’s just a joke. It’s pretty harmless. It’s certainly not hurting anybody and this is a public official."

He added, "They’re asking us to basically bend the knee and say 'we admit that this is hateful conduct, please keep us on your platform.' And we’re not going to do that, so we don’t know where this ends. There’s an appeal process we can go through, but we’re not going to delete the tweet."

Carlson responded by pointing out that Twitter allows government officials to accuse people of treason but censors those who call out Levine’s "ludicrous" claim of being a woman. Carlson also said he hoped Congress would shut down the platform.

Dillon responded that even comedians have been restricted in doing their job of "...poking holes in the popular narrative," and instead are pressured to "promote" it.

"Comedy is being rendered ineffective where they’re basically making rules about what you can and can’t joke about to the point where we’re saying 'well, we’re going to continue to make these jokes' and if we have to, we’ll do it off Twitter."

Dillon added that he believes the majority of Americans are on his side and that "We don’t believe that facts are hate speech, that speaking truth is hate speech. At some point, people need to stick by this, Tucker. People have to be willing to say ‘listen, if they want us to deny the truth in order to stay on this platform, we speak the truth. Make them kick you off. Make them boot you."