Poilievre's repeated request that Trudeau simply reply "yes" or "no" went unheeded, with the prime minister instead delivering long-winded responses that failed to address the question at hand. 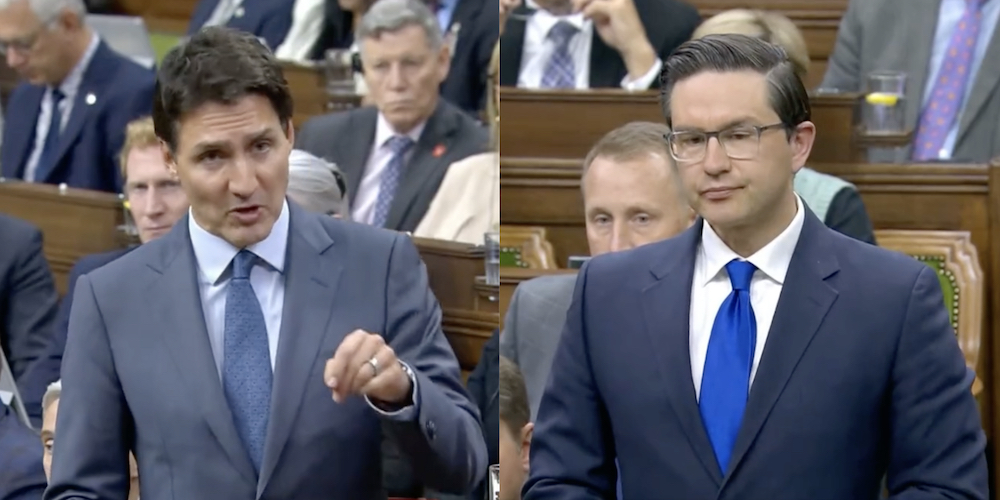 Poilievre’s repeated request that he simply reply “yes” or “no” went unheeded, with Trudeau instead delivering long-winded responses that failed to address the question at hand.

“Is the IRGC a terrorist group, yes or no?” Poilievre asked.

“We have recognized that Iran is a state sponsor of terrorism,” Trudeau replied. “We have continued to move forward in holding the IRGC to account, including by putting sanctions on some– a number of their top leaders to ensure that they cannot take safe haven or buy property in Canada. We will continue to hold this blood-thirsty regime to account.”

“We don’t need drama, we don’t need acting, we need action,” Poilievre shot back, taking on a more somber tone.

He reiterated that the IRGC was responsible for killing fifty-five Canadian citizens when it shot down Flight PS572 in January, 2021, and pointed out that despite this, they can still legally operate in Canada as a result of Trudeau’s failure to designate them a terrorist organization.

“Again, yes or no,” he asked Trudeau, “Is the IRGC a terrorist organization?”

The prime minister again deflected the question, however he did mention that the IRGC’s Quds force was listed as a terrorist group.

“I asked a simple yes or no question,” Poilievre stated sternly.

Trudeau once again failed to answer the question.

“The prime minister has had 1,001 days to think about the answer,” said visibly frustrated Poilievre. “One last time, will the prime minister show some respect and actually answer a question; is this a terrorist group, yes or no?”

Trudeau once again failed to answer the question.

The IRGC has been labeled as a terrorist group by a number of countries, including the United States, which added them to their list in 2019.

Prime Minister Trudeau and his Liberals have offered no explanation as to why they haven’t followed the lead of their neighbors to the south.

Conservatives, on the other hand, have been much more willing to desginate the IRGC as terrorists.

In June, Director of the International Center For Human Rights Ardeshir Zarezadeh and others met with Conservative MPs to discuss the group and its impact in Iran and abroad.

"IRGC is not just the military. It's the government. It's the real government in Iran. They're in control of [the] economy, politics, military, intelligence," Zarezadeh said. "The IRGC is a terrorist organization. It's a proven fact."

The issue has become more pressing following the death of Mahsa Amini, as calls continue to grow asking the government to take action.
ADVERTISEMENT
ADVERTISEMENT
Trudeau_IRGC