The sidewalks were packed with protestors waving Persian flags, chanting pro-freedom slogans, and singing, all while motorists honked along in support. 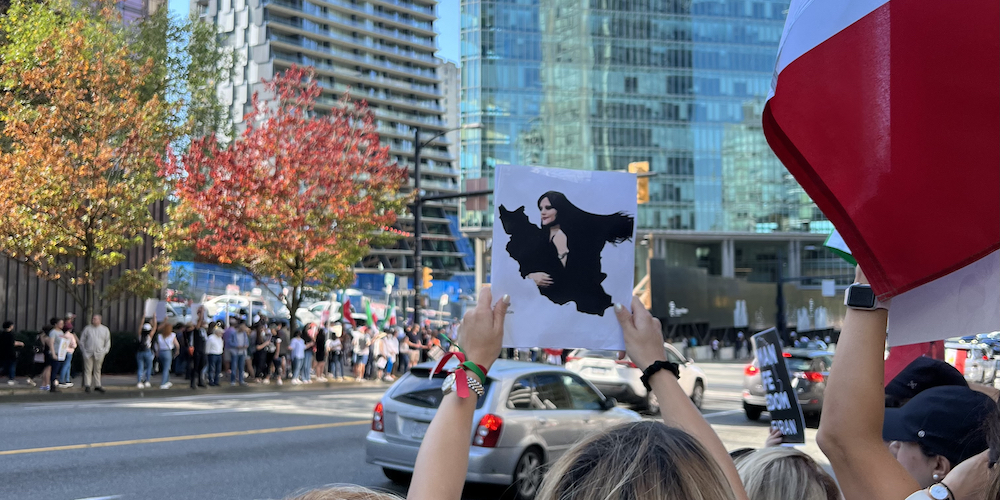 Jarryd Jaeger Vancouver, BC
Oct 2, 2022 minute read
ADVERTISEMENT
ADVERTISEMENT
In September, 22-year-old Mahsa Amini died while in custody of the Iranian regime’s “morality police,” sparking a wave of protests around the world.

Demonstrations continued on Saturday, including in Vancouver, where thousands came out to show their support not only for Amini, but the countless others who continue to have their human rights trampled by the regime.

As most protests in the city do, Saturday’s began outside the Art Gallery, and around 2 pm, crowds of people began slowly making their way down West Georgia towards Stanley Park.

By 3 pm, the sidewalks were packed with protestors waving Persian flags, chanting pro-freedom slogans, and singing, all while motorists honked along in support.

“Freedom for Iran!” they shouted, carrying signs and posters with messages such as “End violence against women,” “be the voice of Iran, “ and “When dictatorship is a fact, revolution becomes a right.”

One of the main rallying calls for protests both in and out of Iran has been, “Women, life, freedom,” or in Persian, “Zan, Zendegi, Azadi.”

While the goal of the movement has expanded to include all Iranians who suffer under the regime, the tragic death of Mahsa Amini remains the focal point, with calls to “say her name” breaking out routinely among those in attendance.

Near Denman Street, protestors congregated to join in a chorus of “Baroye,” a song that landed its Iranian creator Shervin in jail over his pro-freedom lyrics.

The song, which was viewed across social media nearly 40 million times in forty-eight hours, has since been deleted from Shervin's Instagram account, however it will exist in perpetuity thanks to the thousands who have shared it on Twitter. The title means “for,” and its verses describe in emotional detail the myriad personal reasons behind the protests.

While the vast majority of those in Vancouver cited the ongoing human rights abuses the regime perpetuates against its citizens, everybody had a deeply personal motivation for coming out.

"The bravery of the people of Iran, protesting in Iran, is not comparable to anything in the world," one woman who asked not to be identified said, noting the fact that those who choose to make their voices heard risk their lives in doing so.

She went on to detail the many times that, as a teenager, she had had to deal with the "morality police" for the crime of improperly wearing her hijab.

"But this fight is not just about hijab, it’s about human rights," she said, detailing the plight of Iranian women, who have suffered most under the regime.

"Some people may say that protesting outside of Iran against the government is useless," she added, "but I do it to show my friends and family who are hurting in Iran that there’s hope, and to increase awareness for other governments, other countries."

"Do not associate Iranian people with Islamic Republic," she warned.

Nearly every major city held some sort of demonstration on Saturday in coordination with an internationally organized campaign started by Iranian-Canadian activist Hamed Esmaeilion, whose family were among those killed onboard Flight PS752.

The largest in Canada was, by far, in Toronto, where an estimated 50,000 people gathered in Richmond Hill.

Among those in attendance was Conservative Party leader Pierre Poilievre, who has championed the cause of the Iranian people as of late.

"The time has come for all of us friends of freedom to gather around," he began to thunderous applause. "Too long, we’ve allowed the tyrants in Tehran to terrorize the people, to steal their rights, to engage in extrajudicial arrests and 'disappearances,' to crush protests of courageous young people, and to target women and take away their rights."

"The time has come for Canadians and for people of all the world who stand for freedom against tyranny to rally to free Iran, and to pursue a new, democratic government in that country."

The recent atrocities committed by the Iranian regime and the subsequent protests have received little coverage in western media, however the tide appears to be turning, as those in free countries stand up and become the voice for those whose cries for help have long been stifled.
ADVERTISEMENT
ADVERTISEMENT
Iran_Vancouver