Psaki did confirm a fully-vaccinated White House official tested positive for COVID-19 on Monday — a day after Vice President Harris twisted negative following her meeting with Texas Democrats on July 13. 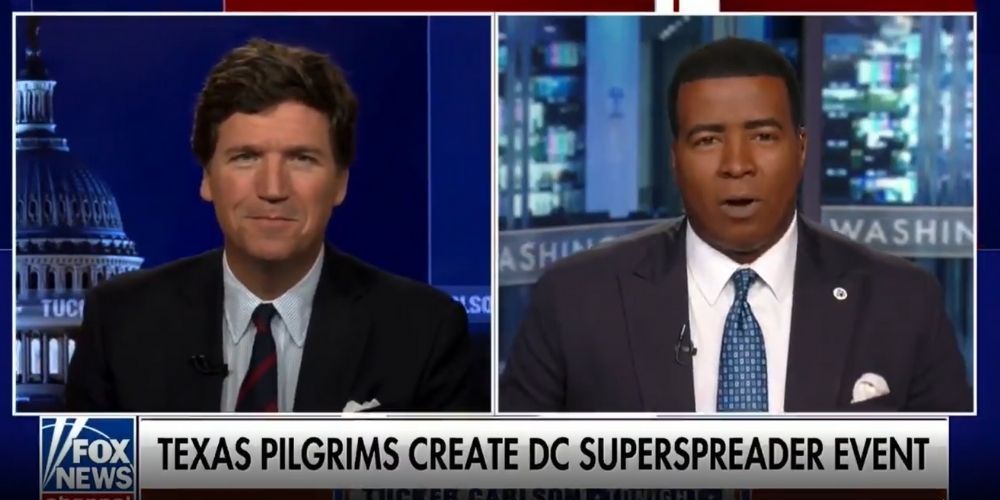 Fox News host Tucker Carlson discussed the Texas Democrat "superspreader event" in DC, where he and his guests called out the representatives for their COVID-19 hypocrisy.

"The Democratic 'freedom fighters' from Texas showed up in DC last week and all of a sudden people started getting Corona in big numbers," said Tucker, adding that they were the reason for a rise in active COVID-19 cases.

Kevin Corke told Carlson, "You’ll recall that when the White House held an event for Amy Cohen Barrett, the Trump administration was accused of creating a superspreader event. It was an inescapable narrative promoted across cable news for days but by comparison, relatively few outlets have called out the Texas Democrats trip to the nation’s capital."

"It was a superspreader trip, without a doubt. At least 6 confirmed cases of COVID-19 from the roughly 60 travellers, and new cases have spread to the White House speaker’s office, where a fully-vaccinated aide has tested positive for COVID-19, after coming in contact with Texas lawmakers,” he said.

Drew Hammill, one of Pelosi's top aides, said that while the senior staffer did not have any recent contacts with the speaker, her office is taking extra precautions, according to Fox News. Hammill said, "Yesterday, a fully vaccinated senior spokesperson in the speaker's press office tested positive for COVID after contact with members of the Texas state legislature last week."

Hammill added, "This individual has had no contact with the speaker since exposure. The entire press office is working remotely today with the exception of individuals who have had no exposure to the individual or have had a recent negative test. Our office will continue to follow the guidance of the Office of Attending Physician closely."

Pelosi and her staff also began wearing masks again in the capitol, and when asked if she would reinstate the mask mandate in the House of Representatives, she said that such a decision "will be up to the Capitol physician."

"White House press secretary Jen Psaki is rejecting the superspreader label," said Corke. "She said Tuesday it is not a characterization we are making today, but she did confirm a fully-vaccinated White House official tested positive for COVID-19 on Monday — a day after Vice President Harris twisted negative following her meeting with Texas Democrats on July 13."

Vice President Kamala Harris, whose visit to Walter Reed National Military Medical Center was scheduled and routine on Sunday also had close contact with the Texas Democrats but has since tested negative, which was confirmed by White House press secretary Jen Psaki at the briefing Monday.

"I think the vice president's office put out that she was tested and there was no detection of COVID-19," said Psaki.

"They also put out some specific details about their proximity to the individuals who tested positive as well. We take these precautions incredibly seriously and abide by the guidance of our help and medical experts."

Corke added that those same lawmakers would remain in DC until August after the special session is over.

Chuckling, Tucker spoke to how the Texas Democrats jetted out of Austin on a private jet with a case of alcohol and COVID-19.

Fellow Fox News host Will Cain said to Carlson, "However many people they expose to Corona Tucker, let’s hope exposes the American people to the 'peacocking hypocrites' they are because how hypocritical can you be." He noted they flew on a plane maskless, while everyone else has had to wear masks when they fly on a plane.

At the White House briefing, Biden press secretary Jen Psaki continued to thank the Texas Democrats for "standing up for voting rights" and said she would not characterize the infectious trip to Washington as a "super-spreader event."

After a number of Texas Democrats, who fled the state in protest over a GOP election integrity bill, tested positive for COVID-19, Fox News reporter Peter Doocy asked Psaki if the controversial trip will be seen as a "superspreader event." Psaki also stated, "We certainly understand there will be breakthrough cases. Even vaccines that are incredibly effective are not foolproof. They're not 100 percent effective. We've seen that.”

Cain added that Texas Democrats are creeping closer and closer to vaccine passports and ask us to trust them. “If this were a Trump rally or a sports event or Spring break, then everything is a superspreader event, except for the actual superspreader events.

Tucker weighed in, stating he is "hardly attacking vaccines" and that he doesn’t convince people to get or not to get them. However, he expressed his concerns over the supposed lies pushed by Democrats that people cannot get COVID-19 or host superspreader events if they are fully vaccinated. "Here you have vaccinated people get COVID-19 and spread it to other people —  maybe we should start being honest about the limitations of the medicine," he said.