A teacher claims that Harper Lee's great American novel To Kill a Mockingbird is racist because, basically, it might make people feel bad. 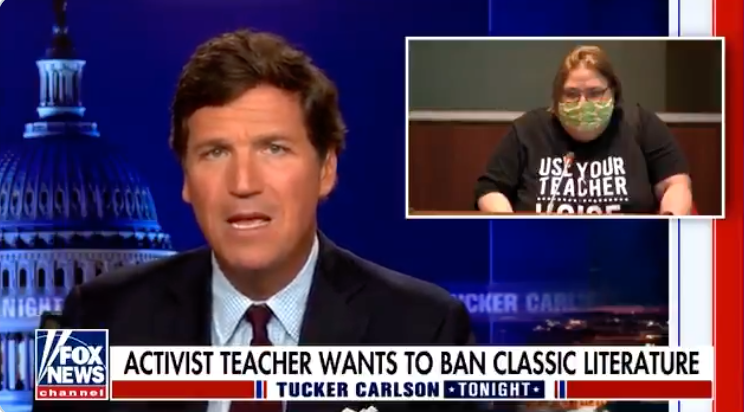 Parents in Loudon County, Virginia, have been fighting back. A wealthy, diverse suburb of Washington, DC, Loudon County used to have great schools. But once parents eyes were opened to the emergence of critical race and gender theory in the schools, as well as the absurd COVID requirements keeping kids locked out, they began speaking up and talking back to a school board that has maintained an iron grip on education.

The community has been the site of confrontations between parents and the school board for months. Teachers have targeted parents who are not aligned with critical race theory, and parents have attended school board meetings to voice their concerns, often at the top of their lungs.

Tucker Carlson brought these local issues into the national spotlight on Thursday night, showing both a teacher and parent in a stand-off at a school board meeting in the county.

A teacher claims that Harper Lee's great American novel To Kill a Mockingbird is racist because, basically, it might make people feel bad.

River Bend Middle School teacher Andrea Weiskopf spoke up for the district's "Culturally Responsive Framework," which was put into place in June 2020 in response to the death of George Floyd in police custody in May 2020, which sparked months of protests and riots.

Weiskopf complained about the parents who opposed the new curriculum. At a meeting on April 8, Weiskopf said "Over the past few weeks, a small group of Loudoun residents have put their racism on display for the nation. They have been emboldened by the meekness and the silence of those on the School Board and in the community who, just one year ago, marched boldly through the streets of Leesburg to protest the pervasive use of violence against Black and brown bodies," she said.

In the clip showed by Carlson, Weiskopf takes aim at those parents. "It's funny how they are so afraid of their children seeing another view," she says from behind a lime emblazoned cloth mask, "of sexuality, gender, or religion."

Lashing out at parents who critiqued a curriculum full of sexually explicit books, Weiskopf said "If you you want to take a look at books that are assigned, let's read To Kill a Mockingbird together. If you aren't willing to consider the racial trauma this assigned book causes black children with its white saviourism, then you have have no business discussing any books."

Carlson shows an opposing parent's view. While Weiskopf is a white teacher dictating her views on classic American novels being racist, a mother who is black struck back against this racist indoctrination that has pushed into schools under the guise of compassion and anti-racism.

At the school board meeting, she said "In the words of Martin Luther King Jr., ‘I have a dream that my four little children will one day live in a nation where they will not be judged by the color of their skin but by the content of their character."

"Now I have a dream that we will implement love, not hate, or supporting another Jim Crow’s agenda," she continues. "CRT is not a ‘nice dialogue,’ it was a tactic that was used by Hitler and the Ku Klux Klan on slaveries many years ago to dumb down my ancestors so we could not think for ourselves. CRT is racist; it is abusive; it discriminates against one’s color."

"We don't want your political advertisement to divide our children or belittle them. Think twice before you indoctrinate such racist theories. You cannot tell me what is or is not racist. Look at me. I had to come down here today to tell you to your face that we are coming together and we are strong," she said, adding that "This will not be the last greet-and-meet. Respectfully."

Carlson suggested that she deserves an award. And she does.