"I was told that certain sections of the document were questioning experiences with people of color or criticizing fellow employees, or even that I was using the word "genetics" in the racial context." 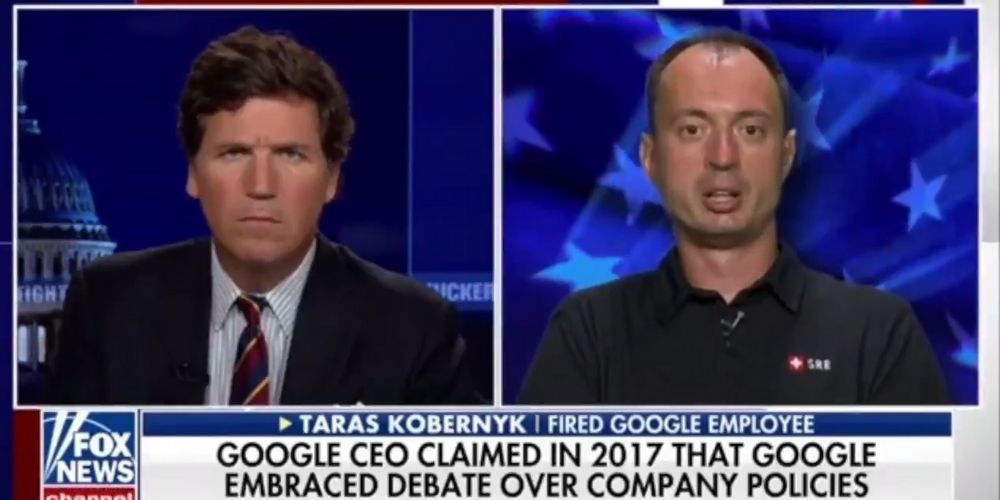 On Fox News Wednesday night, Tucker Carlson interviewed Google whistleblower Taras Kobernyk, who was fired for questioning 'woke' training programs at the tech giant. This followed the firing several years before of another a Google engineer named James Demore, who suggested that there might be biological differences between men and women.

Kabobernyk was based in Zurich, Switzerland, and was fired by Google after he wrote a memo criticizing the company’s so-called 'equity programs.' The content included articles which claimed, "white people have no culture." Another article defended looting.

Carlson began by asking what the memo said. Kobernyk responded, "In my mind, he just tried to list the different things that I encountered during my time at Google, things that I didn't think were right, that were disruptive and long term, just damaging for racial relations."

He continued, "Google was basically undermining things as it was supposed to improve. And so, I wrote it because we were having conversations about this topic with other employees and also my manager. He was aware of me having some concerns and he was asking me for about these concerns. So, I did what people usually do in such cases at Google. You want to discuss something with someone, you write a document, you share it, and then you discuss."

Kabobernyk said that after he showed the document to his manager he was told 'to remove the document. I was told that the document was inappropriate, offensive, containing cherry picking examples. and so on. I ultimately refused to delete the document and that's when Google fired me."

The former Google employee answered, "Verbally, I was told that certain sections of the document were questioning experiences with people of color or criticizing fellow employees, or even that I was using the word "genetics" in the racial context. And that was already how it was called 'offensive' to a reasonable person.

Carlson inquired, "Were you surprised that they fired you for doing what they asked you to do, which is to put in writing your concerns?" Kabobernyk responded, "I wasn't surprised because I was considering different possibilities. After all, it's my job as an engineer. I was somewhat surprised that it went so far because if the company just wanted to bury this thing, it could have pretended actually acting on it and then just dropping it somewhere without saying anything."

Carlson concluded the interview by wishing the Kabobernyk best of luck in the future. "I hope you get another job that pays better and allows you the freedom to think for yourself. And I admire your bravery and your willingness to come on and tell us what happened to you at Google, which is a monopoly and should be broken up I should add."