WATCH: Tucker Carlson reveals the Biden administration is spying on him

"Yesterday, we heard from a whistleblower within the US government who reached out to warn us that the NSA, the National Security Agency, is monitoring our electronic communications and is planning to leak them in an attempt to take the show off the air." 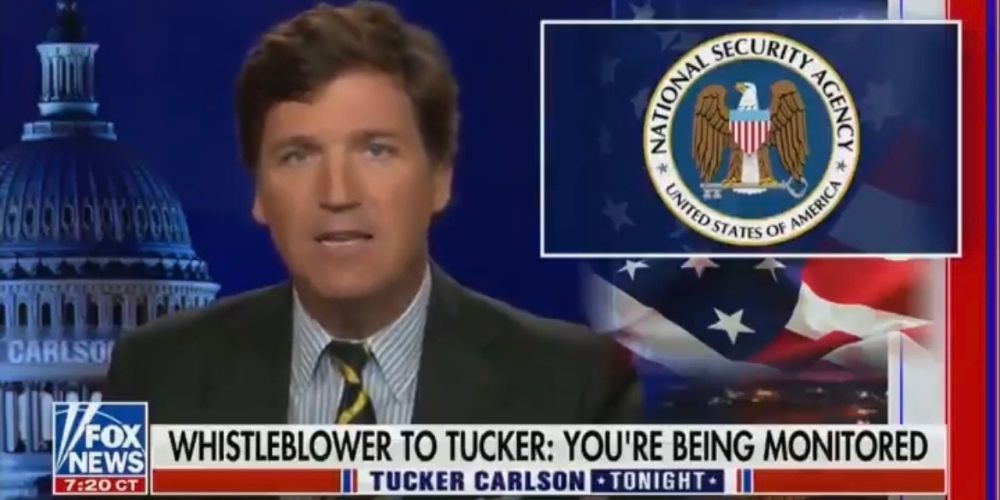 Fox News host Tucker Carlson revealed Monday that the Biden administration is spying on him, after a whistleblower with the National Security Agency (NSA) delivered a shocking warning that the agency plans to leak confidential emails in an attempt to take his show off-air.

"Yesterday, we heard from a whistleblower within the US government who reached out to warn us that the NSA, the National Security Agency, is monitoring our electronic communications and is planning to leak them in an attempt to take the show off the air," Tucker Carlson said.

"Now that's a shocking claim and ordinarily we'd be skeptical of it. It is illegal for the NSA to spy on American citizens. It's a crime. It's not a third world country. Things like that should not happen in America, but unfortunately they do happen. And in this case they did happen," Carlson continued.

"The whistleblower, who is in a position to know, repeated back to us information about a story that we are working on that could have only come directly from my texts and emails," Tucker explained. "There was no other possible source for that information period."

The primetime Fox News host went on to explain that the NSA, at the request of the Biden administration, is spying on his show for political reasons.

Fox News filed an Freedom of Information Act (FOIA) request Monday morning asking for all of the information that the NSA and other agencies have gathered about Tucker Carlson’s show. Fox News also contacted the press office at both NSA and the FBI, attempting to get to the bottom of the allegations.

"We don't expect to hear much back, that's the way that usually goes," Tucker said, calling on Congress to take action.

"Only Congress can force transparency on the intelligence agencies and they should do that immediately," Carlson added. "Spying on opposition. Journalists is incompatible with democracy. If they are doing it to us, and again, they are definitely doing it to us. They are almost certainly doing it to others. This is scary and we need to stop it right away."