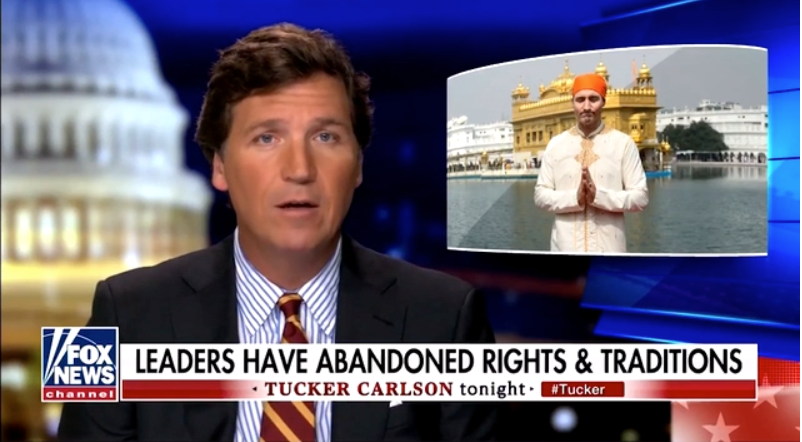 Tucker Carlson took to his show on Fox News Monday evening to slam the response of Canada's government and provinces to the coronavirus pandemic.

"Not so long ago, Canada was considered such a stable and restrained place that it's main problem was being uninteresting, nothing seemed to happen there," Carlson said. "Not anymore."

"Since COVID arrived, the Canadian authorities bare no resemblance to the taciturn Mounties you may remember. They act like Burmese generals putting down a coup, nothing is too harsh for their own citizens."

Carlson showed a viral video from Gatineau depicting new years' eve celebrators being dragged out of a home, pointing out that they were not "selling fentanyl" or committing another crime.

"But what happened after that may be worse than the footage you just saw," Carlson said, noting that the gatherers were charged $1,500 per person. "They arrested the owner of the home... his crime was described as 'refusing to provide personal information to the authorities.' So they barged into his home, and when he didn't answer the right questions quickly enough they arrested him."

Residents of Quebec have been since been subjected to even stricter measures, with a curfew being implemented across the province to prevent the spread of coronavirus.

"That is not a public health measure, that is intentional humiliation."

Carlson pointed out that the officers who performed the arrests themselves were not wearing masks themselves, yet were excused from doing so because they were enforcing coronavirus law.

Many of the authorities who have been implementing and enforcing coronavirus rules have violated the rules themselves. Former Ontario Finance Minister Rod Phillips was forced to resign from his position after travelling to the Caribbean for vacation. At the federal level, NDP MP Niki Ashton was stripped of her critic position after traveling to Greece to visit her "ailing grandmother."

Carlson went on to point to a number of other cases of what he views as the excesses of coronavirus restrictions in other western countries, including the United Kingdom and Spain, the later of which he described as "Orwellian."

The late night show host then turned his attention to San Francisco, telling the story of a gym owner who has had her livelihood destroyed by coronavirus restrictions.

"My business has been completely decimated," she said.

The gym owner said she would be more willing to close her gym if she was shown data showing it to be dangerous, but has not received any such data.