Following the lead of the CIA, the US Army released an ad that seeks to appeal to a new, woke generation. 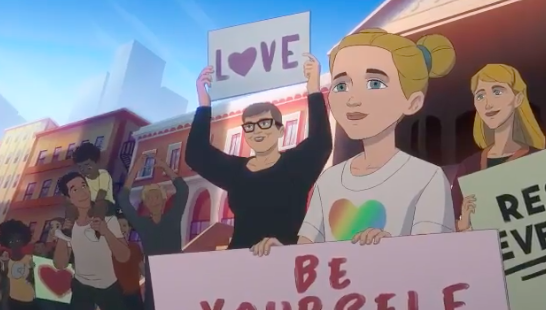 The latest recruitment ad from the US Army features a girl raised by 2 moms, civil rights protests, a lesbian wedding and women "shattering stereotypes." It has the feeling of checking off boxes, trying to appeal to every facet of intersectionalism, and not actually designed to appeal to those who might be willing to fight and die for their country.

Following the lead of the CIA, the US Army released an ad that seeks to appeal to a new, woke generation. The ad follows a girl named Emma, raise by two moms, one of whom becomes disabled. Emma marched in unspecific civil rights protests, "joined a sorority full of other strong women" but decided to "answer her calling" to join the military.

In Emma's protest, signs can be seen saying "love each other," "respect everyone," and Emma herself is holding a sign saying "be yourself." Emma narrates this by saying she "marched for equality—I'd like to think I've been defending freedom from an early age."

The ad series, called "The Calling," is intended to be a five-part video series that follows the stories of five "diverse" soldiers from different backgrounds who all joined the military. Corporal Emma Malonelord portrayed in this ad is said to be "a soldier who operates the Patriot Missile Defense System."

This new trend has been coined by some as "woke-washing." The ad by the CIA that sparked the term encourages every "single person, whatever their gender, gender identity, race, disability, or sexual orientation, can bring their entire self to work every day." The CIA ad features a gay agency librarian who finds comfort in LGBT symbolism, aka a rainbow, displayed on CIA lanyards.

Internet trolls quickly jumped on both ads, creating memes that depict children in the Middle East eagerly anticipating the day that drone strikes will be performed by women. Others depicted bombers dropping payloads now sporting rainbow flags and the Black Lives Matter logo.