WATCH: 'We are go for launch!' NASA and SpaceX head to space today

The range is currently clear for launch. The launch is scheduled for 3:22 pm today, and once propellant is loaded, the mission is underway with no turning back. 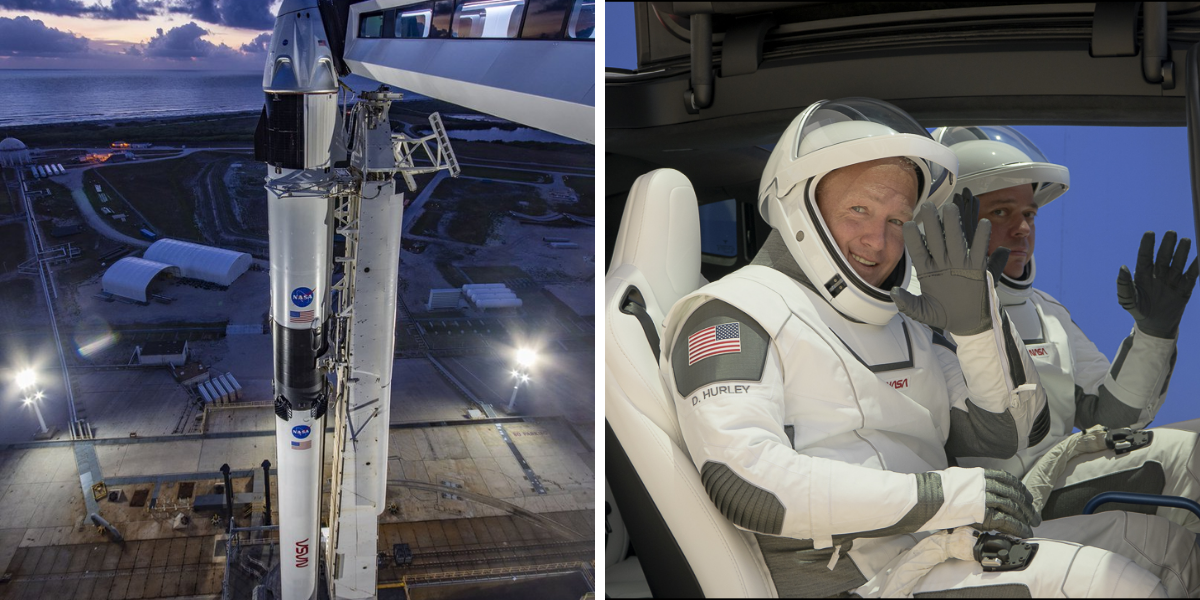 For the first time since July 2011—when space shuttles were retired—NASA is launching astronauts to the international space station on American soil. This is the final test by NASA before Space X can be certified for missions to the International Space Station.

The range is currently clear for launch. The launch is scheduled for 3:22 pm today, and once propellant is loaded, the mission is underway with no turning back.

This mission differs from previous ones as SpaceX will be overseeing mission control instead of NASA. SpaceX is a private company founded by Elon Musk. The company built the Falcon 9 rocket which is being used for the launch as well as the capsule—Crew Dragon—which will carry the two astronauts, according to the New York Times.

Lift off was scheduled for this past Wednesday, but was postponed until today, at Florida’s Kennedy Space Center. The launch is dependent on the weather, and given that the Department of Defence’s 45th Weather Squadron gave conditions a 50/50 chance of being good enough to lift off on Wednesday, the launch was moved. There was also a tornado warning near the site on Wednesday afternoon.

Douglas G. Hurley and Robert L. Behnken are the astronauts being launched into space. The two were selected by NASA in 2000 and both have both worked as military pilots in the past. They have also both flown on two previous space shuttle missions. Hurley went to space in the final NASA mission in 2011.

Hurley and Behnken are suited up and secure in the space craft. Musk and Jim Bridenstine, NASA’s administrator, spoke to the men for the last time before the launch wearing surgical masks and keeping six feet of distance between themselves and the astronauts.

After making phone calls to friends and family, they boarded the Falcon 9 rocket which is almost as long as a football field.

This is the first time SpaceX has taken people to space. The men will be flying in the Crew Dragon capsule which is an upgraded version of the original Dragon capsule built by SpaceX.

The Crew Dragon can fit up to seven people but has four seats for the NASA mission. If the launch is successful, four astronauts will be launched to the space station in the capsule before the end of the year.

When designing the suits, Musk wanted something that was both stylish and workable.

The suits the astronauts are wearing white and black suits that are designed for launch and re-entry. The two drove to the launchpad in a black and white Tesla.

"Suits are the charismatic mammals of space hardware," noted Cathleen Lewis who is the curator of international space programs and spacesuits at the National Air and Space Museum of the Smithsonian Institution. "They evoke the human experience."

The astronauts are scheduled to make it to the International Space Station about 19 hours after they launch.

If the launch ends up being delayed, the new orbital path with cause the trip to take over 30 hours as the capsule will have to catch up to the space station.

Duration of stay in space

The plan is for Behnken and Hurley to stay at the station for a minimum of one month and help the other astronauts by performing space walks and operating the Canadian-built robotic arm.

Spectators have been urged by NASA not to come to the Kennedy Space Center to avoid spreading coronavirus. Officials are still expecting large crowds at the event. Last month Bridenstine asked spectators to watch the launch from home.

"When we launch to space from the Kennedy Space Center, it draws huge, huge crowds and that is not right now what we’re trying to do," he said during a news conference.

NASA doesn’t have much control over crowds outside of the Kennedy Space Center.

During a news conference on May 1, Wayne Ivey, the Brevard County Sheriff, disagreed and said people should come to the launch.

"We are not going to keep the great Americans that want to come watch that from coming here," Sheriff Ivey noted. "If NASA is telling people to not come here and watch the launch, that’s on them. I’m telling people what I believe as an American. And so NASA has got their guidelines, and I got mine."

Executive director of the Space Coast Office of Tourism, Peter Cranis said that he expects beaches and parks to be covered with a couple hundred thousand people.

He said that over a dozen beachside hotels reported being fully booked for the launch.

"Judging from the crowds on Memorial Day weekend, I would say that people are ready to get out," Mr. Cranis said. "They seem to be very happy to be able to be out."