WATCH: White House suggests Cuban protests for freedom may be about vaccine access

"So when these protestors are yelling 'freedom' and 'enough' there are people in the administration who think they are saying 'freedom from rising COVID cases?" Doocy asked. 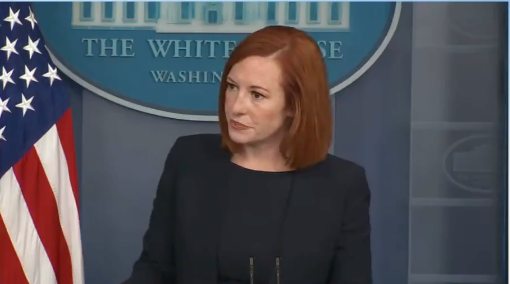 After a weekend uprising in Cuba, with citizens of that nation taking to the streets to demand liberty and freedom, the Biden administration claimed that these citizen-led efforts had more to do with concerns over the rise in COVID cases on that island nation that a desire for regime change.

White House Press Secretary Jen Psaki took a question about the events in Cuba, and the administration's claim that vaccines are the reason that Cubans were out in the streets.

Fox News' Peter Doocy asked, as regards Cuba, "you're talking today about how some of these protests are inspired by people who are exhausted by the government. Why yesterday was the state department saying that this was all happening out of concern for rising COVID cases?"

"I would say first that the protests were just happening yesterday," Psaki replied. "We're still assessing what is motivating, and of course, driving all of the individuals who came to the streets. But we know, when we say exhaustion, the manner by which the people of Cuba are governed, that can cover a range of issues, whether that's economic suppression, media suppression, lack of access to health and medical supplies, including vaccines. There are a range of reasons and voices we are hearing on the ground from people who are protesting."

"So when these protestors are yelling 'freedom' and 'enough' there are people in the administration who think they are saying 'freedom from rising COVID cases?" Doocy asked.

"Again," Psaki replied, "I would say that when people are out there in the streets protesting, and complaining about the lack of access to economic prosperity,  to the medical supplies they need, to the life they deserve to live, that can take on a range of meanings. There's a global pandemic right now, most people on the ground don't have access to vaccines, that's something we'd love to help with."

Psaki addressed another reporter's similar concern, saying  that the US has provided "a great deal of assistance to Cuba," in "democracy assistance" and that the administration has provided help to Cuba over the past few months.

"One of the issues that protestors are out there justifiably protesting in the streets about is hunger, lack of access to vaccines, etc. But we are continuing to provide a range of assistance, which we will continue to do. I will say on vaccines: one of the challenges… is that Cuba has not joined COVAX," she said.

"We certainly recognize that access to vaccines is one of the issues that a number of individuals in the streets is voicing concern about," Psaki said, "but we have to determine what the mechanism would be to work with the Cuban people to get vaccines to them. That's something we're working through."

"There's every indication that yesterday's protests were spontaneous expressions of people who were exhausted with the Cuban government's economic mismanagement and repression. These are protests inspired by the harsh reality of every day life in Cuba," Psaki said to another reporter when asked about the administration's policy plans regarding Cuba.