When Democrats lose, Democrats blame white women, and after Tuesday's results favoring Republicans and moderates over progressives and their policies across the country, #WhiteWomen was trending on Twitter. 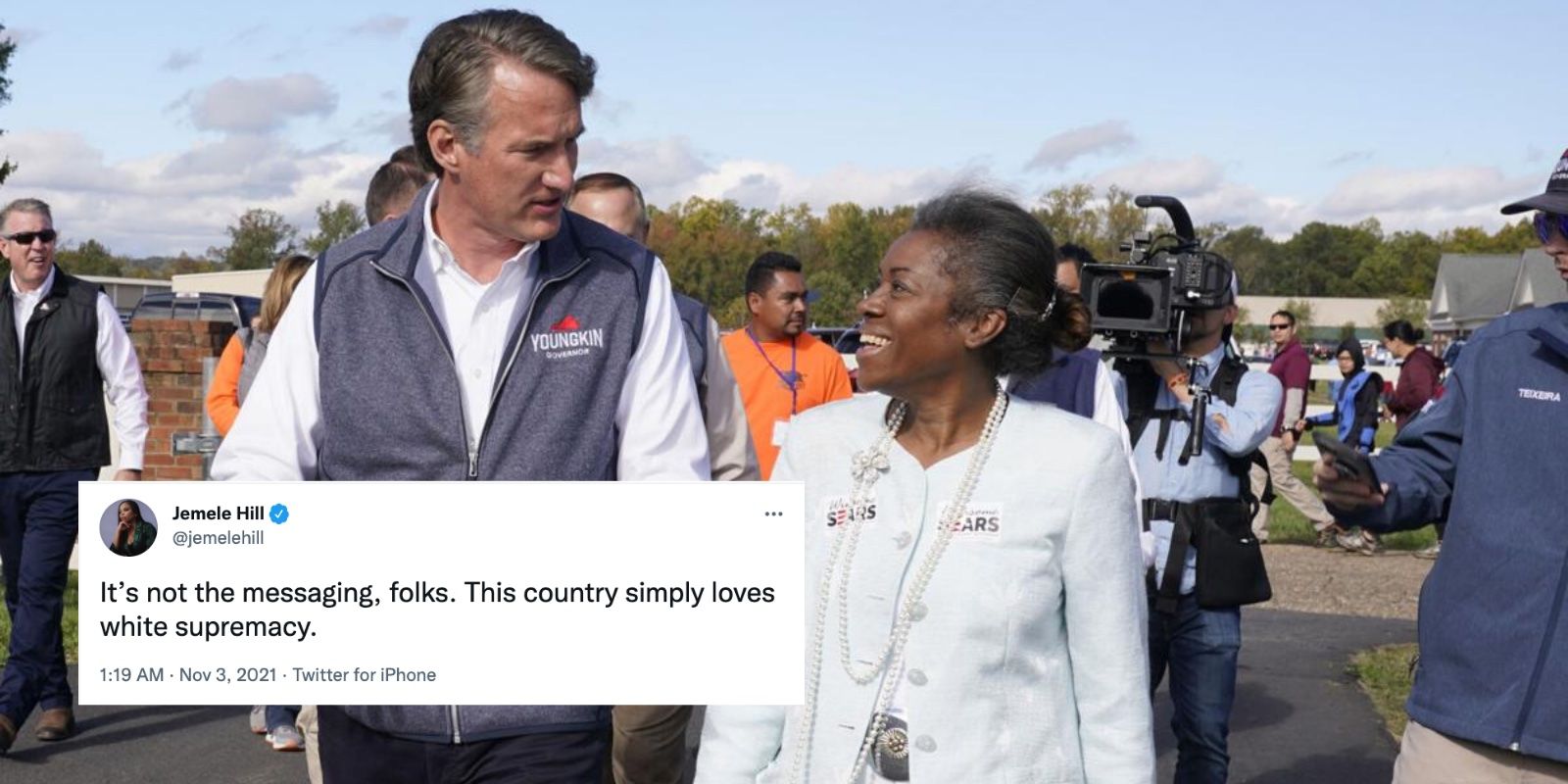 When Democrats lose, Democrats blame white women, and after Tuesday's results favoring Republicans and moderates over progressives and their policies across the country, #WhiteWomen was trending on Twitter.

Why? Because many see the failure of progressivism the way they see everything else, through a lens of race. When parents spoke up in Loudon and Fairfax Counties in Virginia, pundit Juan Williams said that the notion of "parents rage" was actually a stand in for white supremacy.

When Republicans won a majority in Virginia, taking hold of both the lieutenant governorship as well as the governorship, Atlantic columnist Jemele Hill said it was white supremacy, regardless of the fact that the state's new lt. governor is Winsome Sears, a black woman and a veteran of the US Armed Forces.

Hill, who previously said that the US is just as bad as Nazi Germany, that Olympic rules against drug use and swim caps disproportionately impact "athletes of color," and that moderate Democrats refusal to back sweeping, federal, election overall bills was a function of "white supremacy."

Sears had come out strong against the notion that her campaign was in some way rooted in white supremacy, taking on not only Hill but MSNBC's Joy Reid.

Reid said "You have to be willing to vocalize that these Republicans are dangerous. That this isn't a party that's just another party that disagrees with us on tax policy. That at this point: they're dangerous. They're dangerous to our national security. Because stoking that kind of soft white nationalism eventually leads to the hardcore stuff."

Sears gave her answer on Fox News, saying "I wish Joy Reid would invite me on her show," Sears said. "Let's see if she's woman enough to do that, I'd go in a heartbeat. And we'd have a real discussion without Joy speaking about me behind my back, if you will."

Of race, Sears said "It just continues to divide us. And unfortunately, politicians are using it as a tool, because of the things that have happened to us historically, to advance, I would think, their nefarious purposes. And so if we stop just looking at race and just looking at people—because you see, I'm destroying all the narratives about race."

The Democrats messaging since the Trump era has been that Republicans are racist, and that their interest in unseating Democrats, and not going along with progressive policies, stems from a desire to uphold a racist power structure in the US. The use of the hashtag white women is more of the same from a Democrat party that sees white women as a hinderance whose values need to be overcome.

The Daily Beast, not to be outdone by Twitter, ran an article condemning the white women as "Karens," with a headline reading "You Damn Karens are Killing America." In it, The Daily Beast posits that white women "vote for their interests, which is preserving whiteness at all costs." In defense of his claim, despite historic wins for a black woman as lt. governor and an Hispanic, son of immigrants winning AG, Daily Beast writes that these two are likely just shills for whiteness.

The complaint is that white women in Virginia overwhelmingly supported conservative Glenn Youngkin over progressive Terry McAuliffe. One of the big differences between the two is that McAuliffe slammed parental rights, while Youngkin vowed to uphold them.

Activists claimed that white women, in voting for conservatives, are the "footsoldiers of white supremacist patriarchy."

While others more plainly said that if white women vote against progressives it is not policy to which they are opposed, but people of different races entirely.

And others weren't content to simply slam these women for their race, but complained that they weren't educated enough, either.

The progressive mantra leveled at those who disagree as been that those people are racist. But as the poll closed in Virginia, and voters expressed to the exit pollsters that among their top concerns were education, it became clear that parents sticking up for their kids don't care what they are called.

The more Democrats and progressives double down on racial division and hatred, the more they will lose the nation.