Even in death, the victims of cancel culture continue to be maligned for the actions that led to their "cancellation." A former professor who claimed his own life after being canceled over a tweet now continues to be defamed for "racism" and "misogyny." 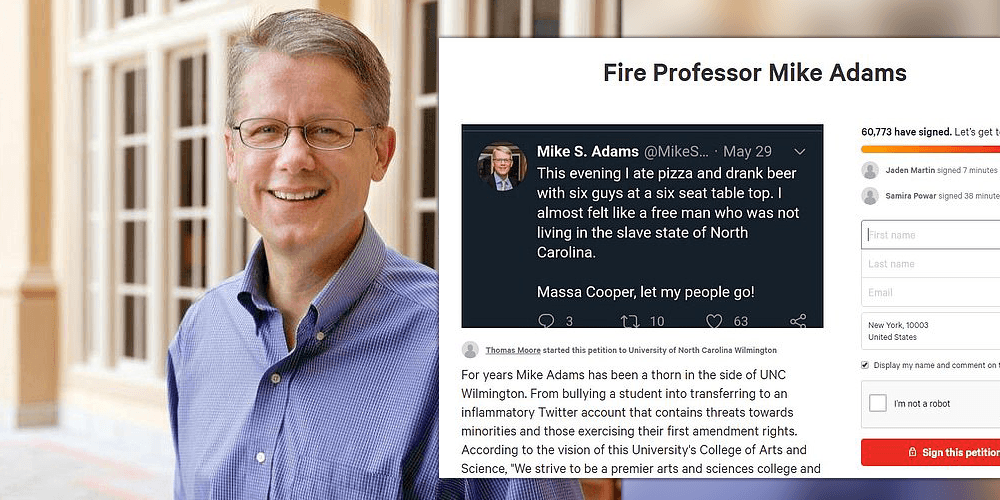 Even in death, the victims of cancel culture continue to be maligned for the actions that led to their "cancellation." A former professor who claimed his own life after being canceled over a tweet now continues to be defamed for "racism" and "misogyny."

Mike Adams, who taught sociology and criminology at the University of North Carolina in Wilmington, faced backlash for describing the state's governor Roy Cooper as “Massa Cooper" on Twitter in May. He was found dead Thursday at his home after he was forced to retire last month over a tweet.

Adams had tweeted about the statewide crackdown on dining as he ate and drank with six guys at a six seat table top: “I almost felt like a free man who was not living in the slave state of North Carolina.”

He then added, “Massa Cooper, let my people go!”

Social justice crusaders complained about Adams' statements and an online petition to fire him reached over 60,000 signatures. "For years Mike Adams has been a thorn in the side of UNC Wilmington," the Change.org petition read.

Sophia Bush, an actress known for starring in the TV show One Tree Hill, was among the triggered who rallied her fans against Adams.

“It’s insane to me that falsifying information on a resume is a fireable offense, and not you know, the racism and misogyny… but whatever it takes to get this pig out of the classroom,” Bush tweeted.

UNCW had released a statement in early June: “Hurtful language aimed at degrading others is contrary to our university values and our commitment to an environment of respect and dignity."

"Its appearance on any platform, including the personal platforms of anyone affiliated with UNCW, is absolutely reprehensible,” the statement continued.

However, the college interjected as a public research institution that is constitutionally bound to support free speech, acknowledging, “no matter how upsetting and distasteful the comments may be, they are expressions of free speech and protected by the First Amendment.”

Adams was set to retire on Aug. 1 with a $504,702 lost salary settlement. He had lost benefits for the early forced retirement.

On Thursday, UNCW's Division of Academic Affairs wrote: “It is with sadness that we share the news that the New Hanover County Sheriff’s Office is conducting a death investigation involving Dr. Mike Adams, professor of criminology. Please keep his friends and loved ones in your thoughts.”

Adams was the advisor to the campus' conservative Young Americans for Freedom chapter.

UNCW YAF responded to Adams' death with a letter: "Mike wasn't just a free speech warrior; he was a free speech general. His whole career, from the early 2000's onward, consisted of keeping UNCW—along with other left-wing universities and institutions—in check when it came to protecting the rights of our student body."

Following his death, a series of news articles were published covering his suicide. Notably, Buzzfeed News headlined the story as "A Professor Who Was Known For His Racist, Misogynistic Tweets Was Found Dead In His Home."

Mike Adams may have spent most of his life building his career as a respected criminologist, but the only thing he'll be remembered for is as single, sarcastic tweet made in anger at North Carolina governor Roy Cooper.

Mia Cathell contributed to this article.