WATCH: Women are women, not 'bodies with vaginas' or 'pregnant people'

Transgender activists are making a concerted effort to erase both the legal category of the female sex class, and to demand that the words "woman" and "female" are deleted when referring to biological women. 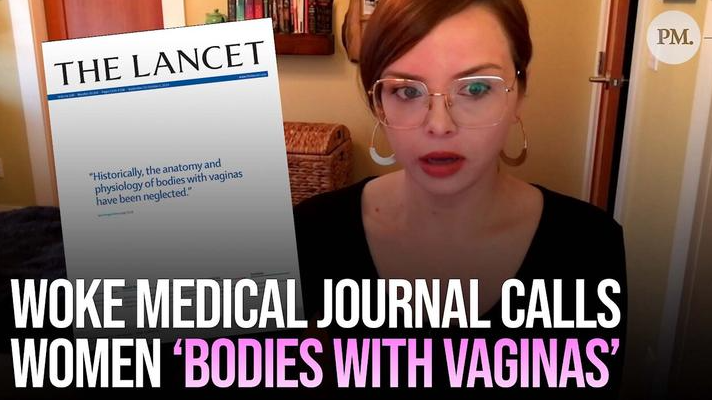 We need to talk about the "w" word: It's harmful, offensive, and exclusionary. It's becoming verboten in many circles, including medicine and feminism.

I guarantee you know what this word is, because I happen to know that your mother is one. No, I am not going to make a "yo mamma" joke, here. The "w" word is woman.

If you're confused about why "woman" is a bad word, let me explain. In our increasingly woke world, transgender activists have managed to convince many of our cultural institutions that "inclusion" is the preeminent value by which we should all govern our policies, behaviours, and language.

And whether by thoughtlessness, cowardice—or even malice— many of our cultural and institutional leaders oblige. After all, who wouldn't want to be "nice" and "inclusive?" Who wants to ignore an allegedly oppressed group of gender activists and invite a cancellation mob to their front door? Almost no one.

So, how does this shake out in the real world? Transgender activists are making a concerted effort to erase both the legal category of the female sex class, and to demand that the words "woman" and "female" are deleted in any instance when their usage was clearly referring to biological women (or, "cis" women, as the activists say).

Do women get cervical cancer? No, "cervix-havers" do. Do women breastfeed their infants? No, they "chestfeed" or, even more ridiculously, "bodyfeed." It is triggering and sometimes even violent to name women in relation to themselves, because a small number of males wish that they were women—and feel threatened and excluded by the biological reality of being female. To be "inclusive," therefore, we must erase women. (Ask yourself why the word "male" and "man" are always left alone.)

Both the American Civil Liberties Union (ACLU) and esteemed medical journal The Lancet recently engaged in the act of erasing the word woman and using deranged language in attempts to virtue signal their "inclusivity." Both were censured. Both apologized. Both apologies were actually dismissive rationalizations for sexist behaviour.

The ACLU butchered a quotation by the late Supreme Court Justice Ruth Bader Ginsberg on a woman's right to choose, replacing "woman" with "person" and so on. Justice Ginsburg was a famous campaigner for women's rights, and it's unlikely that she would ever suggest that "[t]he decision whether or not to bear a child is central to a [person's] life…"

The Lancet, on the cover of their latest issue, used the stomach-churning phrase "bodies with vaginas" to describe women in the context of our historical exclusion from medicine. The word "irony" was created just for this moment. Congratulations, chauvinists.

Anthony Romero, executive director of the ACLU, said in an apology with a NYT journalist that changing the meaning of Ginsburg's words "was not a mistake without a thought." Similarly, Richard Horton, editor-in-chief at The Lancet, equivocated about having "conveyed the impression that we have dehumanized and marginalized women."

They're not sorry; they're only sorry they got chewed out.

We already know why you erased "woman." We were not confused. We are angry, and still are. You can take your apologies and your bodies with anuses and figure the rest out.