WHO declares 'sex is not limited to male and female'

The World Health Organization will build on the existing manual to focus on “updating key concepts around gender," adding that “sex is not limited to male or female.” 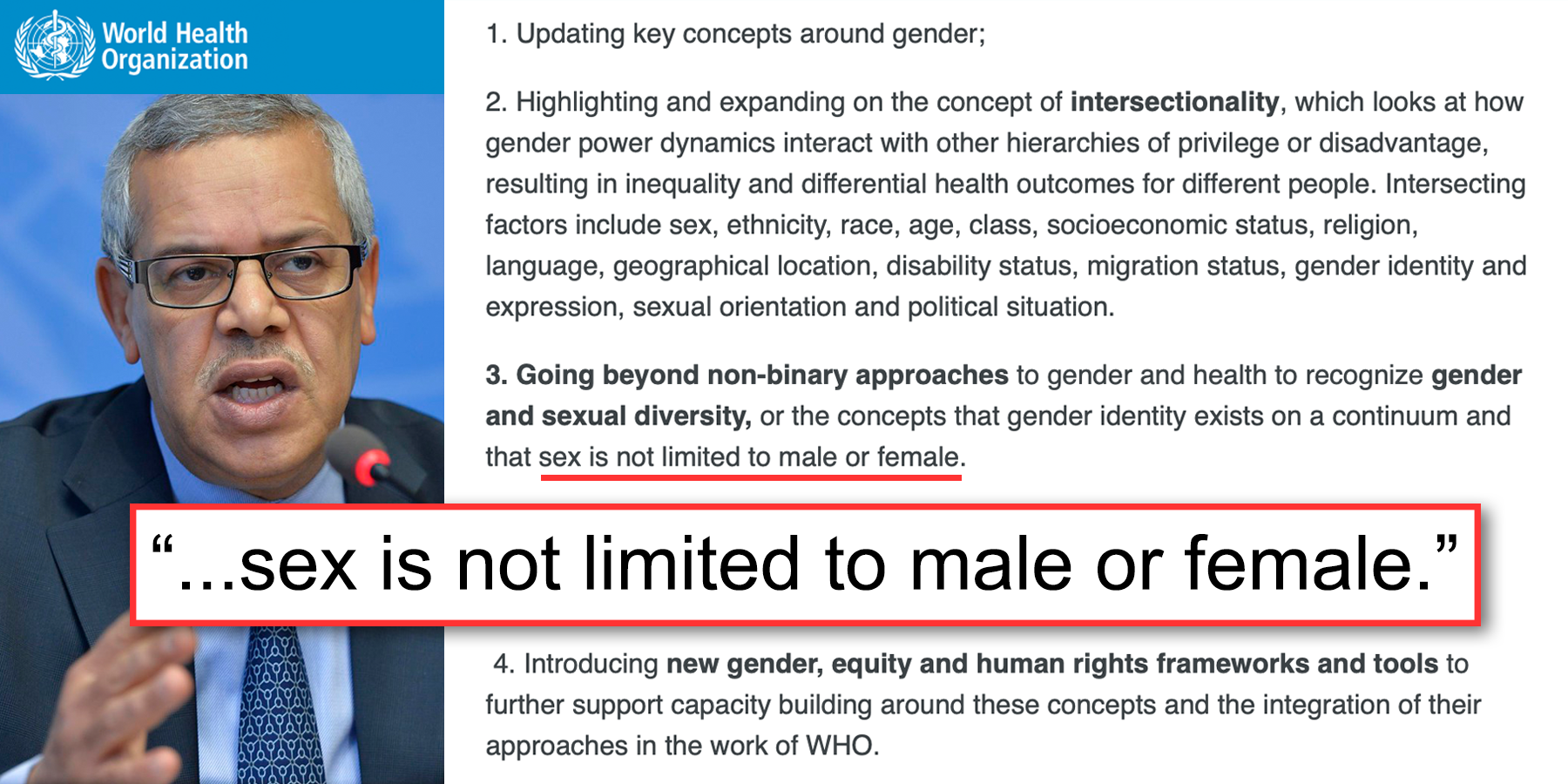 In a news item posted to the World Health Organization (WHO) website on July 6, 2022, WHO announced an update to their "gender mainstreaming manual."

The WHO will build on the existing manual to focus on "updating key concepts around gender" and states that "sex is not limited to male or female."

The first edition of the 146-page manual from 2011 is now being revised "in light of new scientific evidence and conceptual progress on gender, health and development," according to the WHO website. But these revisions have left some biologists puzzled, as it is not at all clear what new scientific evidence has suddenly emerged to justify the claim that there are more than two sexes.

It is unclear what terms like "conceptual progress" mean in this context. But what is clear to most keen observers, is that the WHO is conflating the scientific concept of biological sex with an individual’s undefinable and subjective “gender identity.”

One could speculate that when the WHO mentions "new scientific evidence" they are referring to people with intersex conditions as an expansion of the binary male and female sex categories. But, according to evolutionary biologist Colin Wright, "The term 'intersex' does not refer to a third sex, but is rather an umbrella term for a range of developmental conditions that result in sexually ambiguous genitalia. For there to be more than two sexes, there would need to be another type of sex cell beyond sperm or ova that one’s primary reproductive anatomy can be organized around, through development, to produce."

The WHO also cites the concept of "intersectionality" as an inspiration for the update to their manual, a popular ideological framework used to incorporate activist concepts in social justice into mainstream discourse.

Dr. Karleen Gribble, an expert in nursing and midwifery from Western Sydney University, told the Daily Mail, “The wording regarding there being more than male and female sexes is concerning.” She goes on to say, “The website says that the handbook is being updated ‘in light of new scientific evidence and conceptual progress on gender, health and development.’ However, there is no new scientific evidence suggesting there are more than two sexes. Rather, the idea that there are more than two sexes, is a postmodern, unscientific understanding that should not be supported by the WHO.”

The review and update of the manual is being done in partnership with the United Nations University International Institute for Global Health. The WHO states that “people will have the opportunity to provide inputs [sic] and feedback” during the summer and fall of 2022.