A bestselling trans author’s tweet thread about abuse goes viral, then came the allegations of her own abuse

A viral tweet thread from critically acclaimed trans author Meredith Stroud about abuse may be a case of projection. 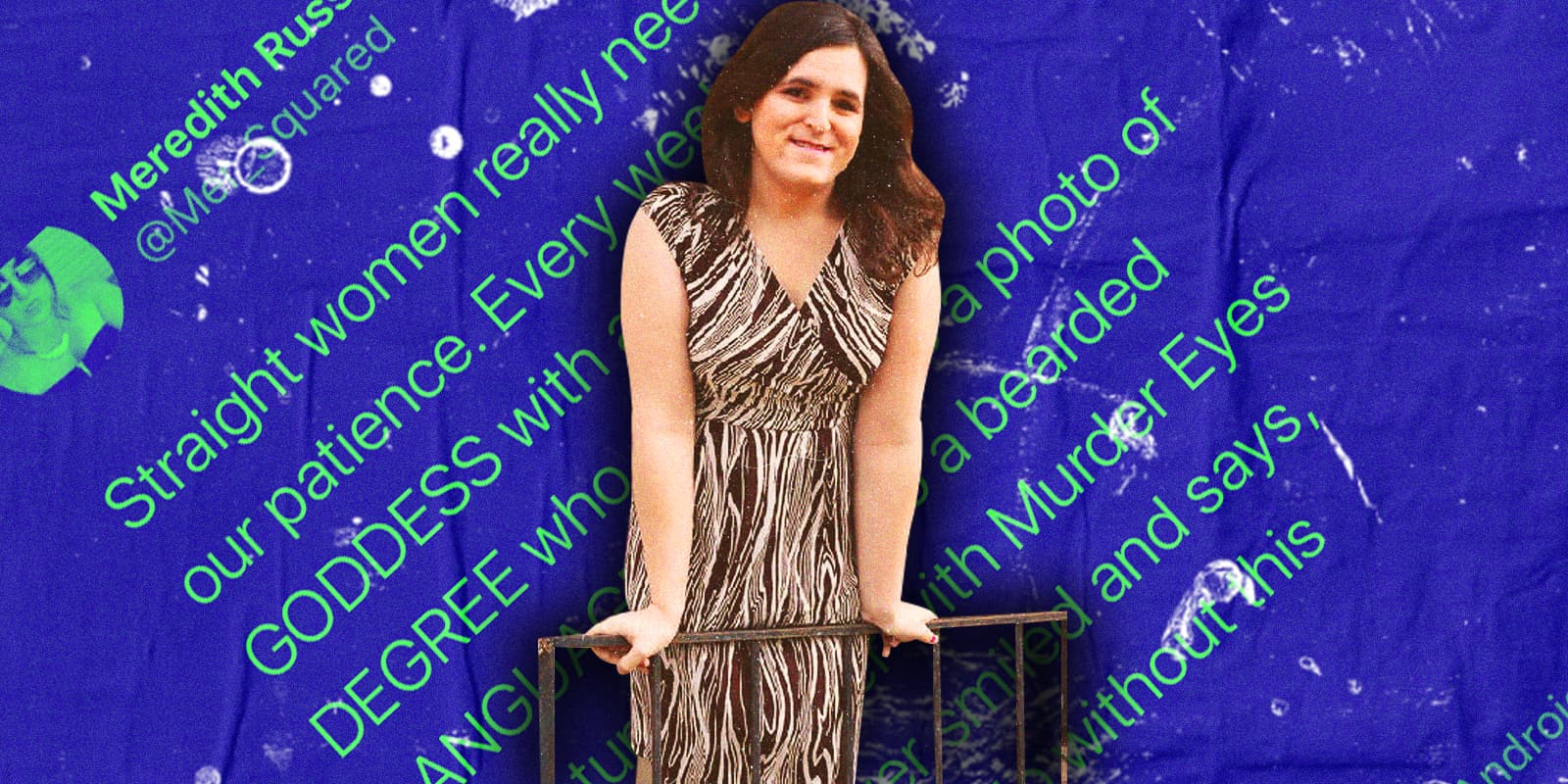 On Nov. 10, a celebrated trans author wrote a viral tweet thread that received over 100,000 likes. The thread complained about the discrepancy between successful, beautiful women, and their often abusive and unkempt male partners.

As it turns out, she may have been projecting.

The author, who writes under the pen name “Meredith Russo,” is formerly known as Meredith Stroud and Travis Lee Stroud. Her 2016 novel If I Was Your Girl received multiple awards and near-endless commendations from literary elites. On the back of the book’s success, Stroud, 32, was invited to publish an article in The New York Times on the struggles of being a transwoman. Stroud’s subsequent book, Birthday, received awards from Refinery29, Bustle and Nylon.

However, some Twitter users brought attention to a blog post from 2016 where the author’s arrest record and past relationship history were detailed, prompting the author to use block lists to squelch criticism.

“Domestic violence is insidious and slow, like the proverbial boiling frog,” Stroud’s ex-wife, Juniper Russo, said. “It’s hard to say when it all started.”

Juniper Russo alleges she was subjected to a campaign of sexual and emotional abuse at the hands of her former partner, abuse she says was so severe that the marriage culminated in a divorce in early 2015.

“We met on OKCupid in 2011 and got married in 2013,” Russo said, claiming the physical abuse started shortly after the wedding. “We had a lot of shared interests at the time, and I was naive enough to think that shared interests are the foundation of a healthy relationship.”

Russo shared disturbing details of some of the alleged abuses she suffered during her marriage to Meredith Stroud.

“When my son was born in 2014, I had severe pre-eclampsia and injuries from giving birth. I had to have major reconstructive surgery. I was extremely weak and in severe pain,” Russo said.

“Meredith was extremely abusive to me during this time, calling me a ‘feeding station, not a parent’ because breastfeeding my son was one of the only things I could do, and because I was asking [Meredith] to help with things like diapers,” Russo also alleges.

During this same time, Juniper says Stroud would tell her to commit suicide. “[Meredith] kept mocking me when I was in pain, and told me I was so useless as a parent I should just kill myself.”

Russo says she was first forced to call the police in late 2014, “[Meredith] was having an outburst. I got scared and called 911. [Meredith] took the phone from me, and was heard trying to prevent me from calling for help.”

As a result, Stroud was booked on charges of interfering with an emergency call.

Like many victims of domestic violence, Russo says she still loved and sympathized with her abuser.

“I ended up bailing [Meredith] out, and paying for the legal defense,” she said.

Russo said she often intervened to prevent Stroud from being charged with domestic abuse, noting that the police wanted to charge Stroud in Nov. 2014.

“I was always trying to protect [Meredith] because I knew men’s jail was not kind to transwomen,” Russo said. “She was always threatening suicide if she were to get arrested.” Russo continues, “Even when things were terrible, I was worried for her safety and didn’t want her to kill herself or be beaten to death in prison.”

Russo turned over 53 pages of legal documents to support her allegations.

The divorce record, which features a restraining order against Stroud, includes messages shared between the two in which Stroud admits to abusing Russo. These messages were accepted as evidence by the divorce courts.

In one series of messages from Facebook, Stroud is calmly attempting to diffuse Russo’s desire to proceed with the divorce, offering to go on medication and check into a psychiatric facility for psychosis maintenance.

In this same conversation, Russo expresses fear of Stroud eventually killing her.

In another, dramatically different text conversation, Stroud says she hopes Russo gets “run over by a f*cking truck” and demands Russo reduce child support payments.

At the time, Stroud was recorded by the court as having an income of $8,300 gross per month, having acquired a substantial six-figure advance from Flatiron Books, the publisher of Stroud’s debut novel, If I Was Your Girl. The court would later order Stroud to pay $1,068 per month.

But Russo says Stroud has not paid child support in years, and currently owes over $20,000 in back payments. In July of 2019, Russo attempted to start a GoFundMe to raise the money needed to legally compel Stroud to pay what was owed. Other than the child support arrangements, Russo did not request alimony or any other financial compensation from the seperation.

After the divorce, Russo says Stroud denigrated her in public, telling fans and followers on social media that Russo was “a TERF who had abused and left” Stroud due to her transition from male to female.

“Many trans people are the victims of violence and discrimination, so [Meredith’s] target audience found that totally relatable and credible. They had no reason to doubt her,” Russo said, noting that both she and her current wife are members of the LGBT community. Russo identifies as non-binary, while her current wife is a transwoman.

“I’ve been harassed quite a bit by Meredith’s social network. I lost a lot of friends and have been largely ostracized from our local LGBT community.” Russo says, “I’ll often be online and someone I don’t know will suddenly jump into a thread to announce I’m the TERF who ruined Meredith Russo’s life.”

When asked about her own admissions of abuse in the court document, Stroud again asserted “Either way, my response to the allegations is that I have not ever sexually or physically abused any of my sexual or romantic partners.”

Stroud claimed, at first, that she was “barred” from speaking about her relationship to her ex-wife by law. When questioned about why she had persistently made social media posts about that very subject, Stroud declined to answer before blocking the account used to contact her.

“Meredith thrives on lies and conflict, and she’s a writer, so she knows how to come up with a good story.” Russo says, “I knew when I left her that I’d become the subject of one of these stories.”

Included in the divorce and restraining order filings was an article Stroud wrote with the intention of submitting it to an LGBT magazine. The article, written as an introspective reflection on the couple’s relationship, states in detail the abuse Stroud subjected Russo to.

And despite Stroud’s public attempts to downplay the arrest, Stroud’s written account supports Russo’s claims that it was she who is responsible for jail bailout and the charges being dropped.

The document also backs Russo’s assertion that she continued to support and care for her spouse even after the repeated physical and sexual assaults, a far cry from Stroud’s claims on social media that Russo had been the abuser, and callously made Stroud homeless.

Due to Stroud’s continued public assertions that Russo is to blame, as well as the harassment from Stroud’s fans she’s received in the past as a result, Russo says she continues to fear retaliation.

Russo notes that some of the posts Stroud has made include threats of violence. From a now-deleted alternative Twitter account, Stroud posted how she wanted Russo’s friends to be “brutally killed” in the style of a violent horror movie.

“My main hope, in discussing all of this, is that the defamation against myself and my family will stop.” Russo comments, “I’ve worked so hard to rebuild my life in the five years since I left Meredith, and I’m emotionally exhausted by the fact that I’m still being defamed on a daily basis as a ‘TERF’ and abuser, and that it’s affected my family so profoundly.”

Despite everything, Juniper Russo says she does not wish ill upon her former spouse, and supports Stroud’s work in the literary world.

“I still have to believe that there’s some good inside of [Meredith] and that she’s leaving some kind of positive mark on the world. If her books have saved one single teenager from suicide, I’d consider that to outweigh the pain and trauma I’ve had to endure at her hands.” Russo continues on to note that deeply flawed people can sometimes make good art.

“It’s important to be aware that someone who creates inspiring work is not necessarily a good person, and I think it’s dangerous for anyone to look up to Meredith as a role model, or to take anything she says at face value.”

Russo concluded. “Her work, including how she presents herself and speaks of those around her, is fictional. I’d caution anyone against mistaking any of it for reality.”