Applause rang out amongst the crowd as individuals obscuring their identities proceeded to topple the statue. Shortly after the statue of Egerton Ryerson was toppled, protesters began to vandalize and beat the statue with various different objects. 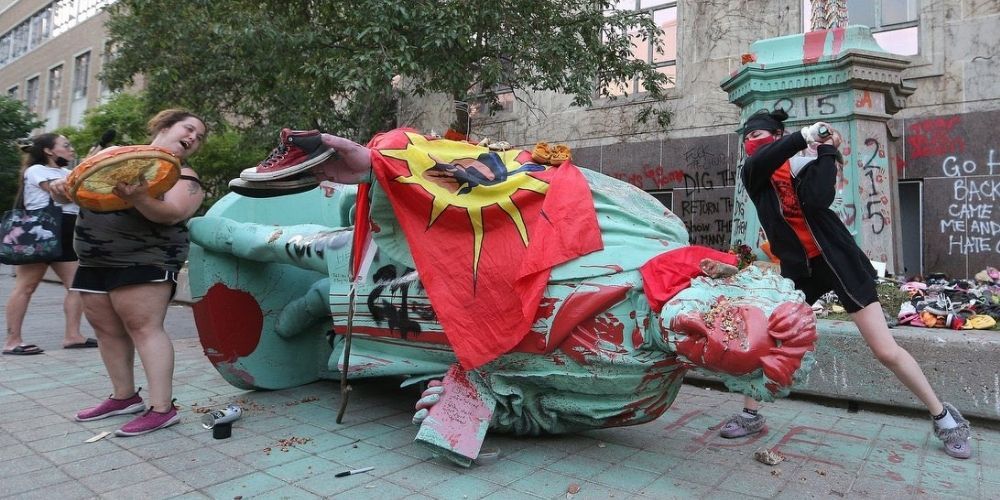 Left-wing activists toppled the statue of Protestant minister and Canadian educator Egerton Ryerson at Ryerson University in Toronto on Sunday following a protest in remembrance of the 215 indigenous children whose remains were recently discovered at a school in British Columbia.

The remains of 215 indigenous children were found buried at the Kamloops Indian Residential School in late May, sparking outrage across the country after Tk'emlúps te Secwépemc First Nation first announced the horrifying discovery.

Canada’s residential school system forcibly separated indigenous children from their families between 1831 and 1996. During this time, children suffered extreme abuse; including rape and malnutrition, Reuters reported. The Truth and Reconciliation Commission referred to the moment in Canadian history as a "cultural genocide."

Due to the recent discoveries, hundreds flocked to Ryerson University on Sunday and gathered in front of the Egerton Ryerson statue and demanded justice after the remains were found in an unmarked burial site.

Students and faculty called on the Toronto university to change it's name and the statue to be removed, as they insist the namesake of the university is allegedly tainted. The statue was vandalized with with red paint and marked with graffiti last week, CP24 reported.

Protesters laid down children’s shoes in front of the statue to represent the children, as young as three years old, whose remains were found buried. As the crowd gathered around the statue, individuals within the group climbed on top and tied rope around the neck of the statue.

Applause rang out amongst the crowd as individuals obscuring their identities proceeded to topple the statue. Shortly after the statue of Egerton Ryerson was toppled, protesters began to vandalize and beat the statue with various different objects.

"It was not some kind of criminal act. It was to bring attention to the violence that has been endured by many different folks because of Egerton Ryerson," Howden said.

Howden is one of the organizers of "X University," a coalition of students and faculty pushing for the university to change its name, CP24 reports.

"I'm hoping that this continues," Howden said. "I don't want this to be picked up moment by moment. I would like this to be a sustainable thing where we see change at the institutional level – to take away the name, to take away the statue, and have a larger conversation about colonial violence and white supremacy in this country and start doing those mechanisms."

The Toronto Police Department issued a statement on Twitter and said, "While we appreciate that recent events have had a traumatic impact, we cannot tolerate acts of vandalism/violence. Officers will be on-site to ensure the safety of everyone involved and will investigate/enforce as necessary."