Tragically, Alec Holowka, a prominent indie video game developer, committed suicide on August 31, 2019, on a few days after being accused on social media of historic physical and emotional abuse. 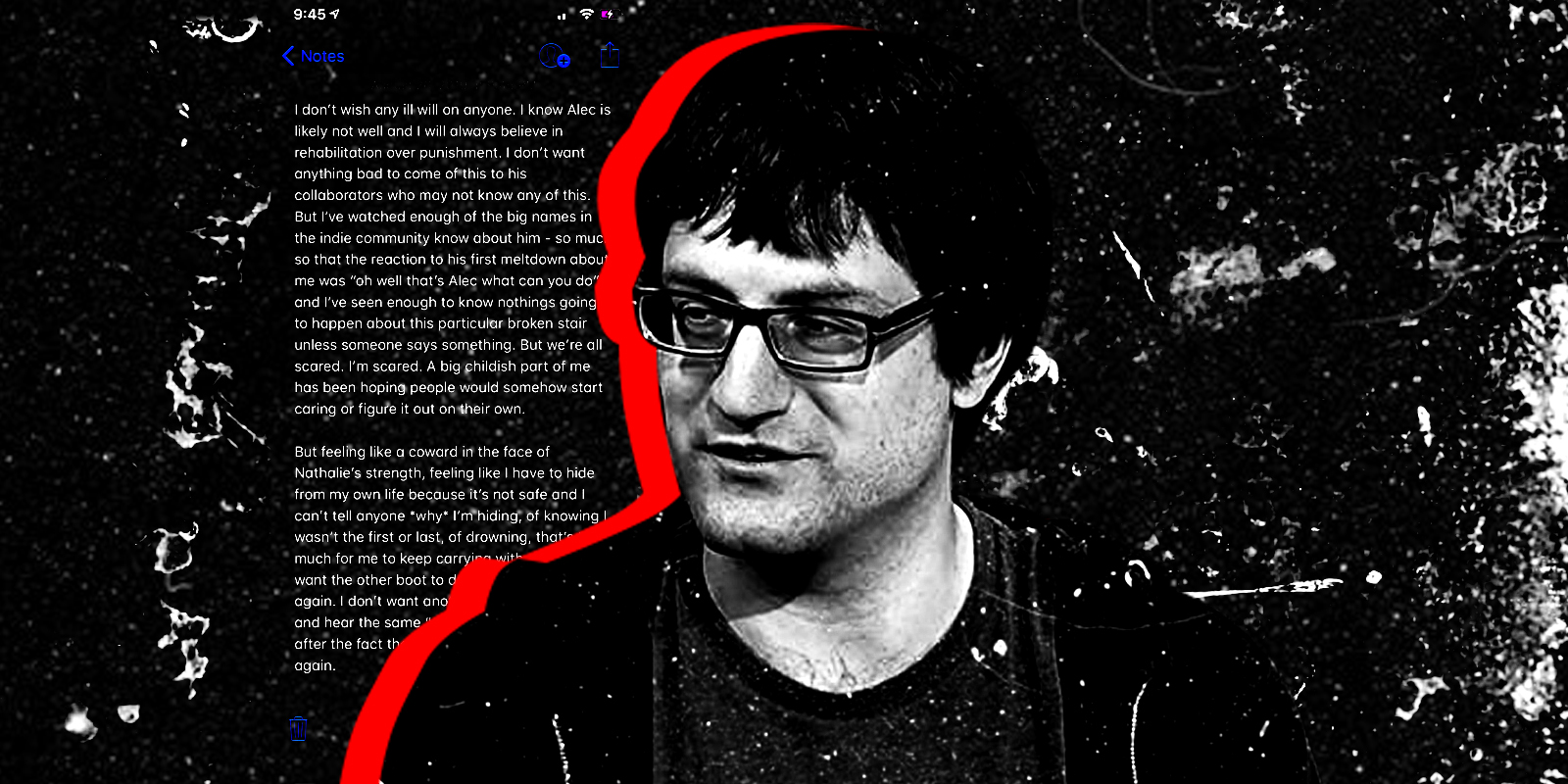 Tragically, Alec Holowka, a prominent indie video game developer, committed suicide on August 31, 2019, only a few days after being accused on social media of historic physical and emotional abuse. Because Alec is now deceased, we will never be able to hear his side of the story but the accusation against him raised serious questions about its own veracity.

Holowka was referred to as a “broken stair” in the accusation posted on Twitter by Zoe Quinn. That account has since been deleted but was archived on the internet. Quinn said the encounter took place over a month during a visit with Alec in Winnipeg.

Quinn, who now uses they/them pronouns, has written a book about how to survive internet mobbings in the past and is a public figure who rose to fame during the GamerGate scandal in 2014. In the accusation, Quinn claims not to have known how to speak about the alleged abuse in the past, which is hard to believe given Quinn’s confrontational approach towards critics over the past few years.

Ironically, Quinn co-founded the Crash Override Network in 2015 to help people cope with internet mobbing. Though Quinn’s social media has either been deleted or set to private, The Post Millennial reached out to Crash Override in order to obtain comment from Quinn. No reply was received at the time of publication.

The allegation itself raises suspicions regarding the accuracy of Quinn’s account. Quinn’s initials are used in place of preferred pronouns to avoid confusion over how many people made the accusation.

Quinn stated that ZQ had been flirting with Alec when ZQ bought a one-way ticket to Winnipeg, intending to only stay for two weeks but that Alec failed to purchase the return flight, leaving ZQ captive in his home until ZQ’s male roommate in Toronto used air miles to purchase a return ticket.

Quinn said ZQ had been hoping to start a small game development “indie house” with three friends but Alec “convinced me to talk the 3 friends out of getting a shared place with me there.” It is hard to understand how Quinn had only been planning to stay for two weeks when ZQ also seemed to have intended to have friends join ZQ in Winnipeg instead of returning home. The one-way ticket fits with the second aspect of the story but not the first.

Quinn called Alec a “broken stair” and claims that he actively blocked ZQ from networking with other developers who could have helped ZQ’s career. It is rather shocking that Quinn did not call him a broken “person,” instead equating his value to what Howolka could do for ZQ. Quinn also alleged that after ending the relationship upon return to Toronto, Holowka banned ZQ from a community network but he also banned himself then asked friends to help him commit suicide.

Given Quinn’s knowledge of Holowka’s history of suicidal thoughts and clearly understanding the way social mobbing can affect unstable people, the choice to publicly accuse him on Twitter calls into question whether or not Quinn could have foreseen the tragic outcome.

In the allegation, Quinn wrote “while I was in Winnipeg he slowly isolated me from everyone in my life” and said “I was scared to leave. I was scared to tell anyone.” But it couldn’t have been very slow, considering ZQ was only supposed to be there for two weeks and ZQ couldn’t have been afraid to tell anyone because Quinn wrote: “my roommate started to get scared and asked me if I needed help getting out.” This roommate then found a way to get Quinn a ticket home fairly quickly even though he didn’t have any money to pay for a flight.

Quinn also wrote that Alec would “act normal when other people were around.” Given that Quinn had just said he isolated ZQ, that doesn’t make any sense. Quinn didn’t have friends in Winnipeg so, if other people were around, that meant Alec was actively introducing ZQ to others during the first two weeks. Talking Quinn out of having three friends fly out to live in Winnipeg with ZQ isn’t isolating, it was probably very good advice.

Quinn downplayed their personal interactions prior to the trip, saying ZQ spent hours on Skype “flirting” with Alec but asserts that Alec said he was in love with ZQ. Quinn also claimed that Alec was the only person in the development community who “had [ZQ’s] back” which completely contradicts the fact that there were three friends who wanted to start an “indie house” with Quinn.

While it is entirely possible that Holowka was abusive in some way during her visit, it is not possible to trust this incoherent account given by Quinn on Twitter.

In a lengthy update on their Kickstarter campaign, Scott Benson explained the August 30th decision to remove Holowka from the team on their popular game “Night in the Woods.” Benson explained that there had been ongoing problems from the beginning regarding Alec’s psychological disorders and they did not part ways because of any single allegation. There was a history of difficult behaviour that had caused a number of problems in the past.

Quinn stated in the Twitter post “I know Alec is likely not well and I will always believe in rehabilitation over punishment.” The question is how a public accusation could have possibly been a constructive method of rehabilitation without the risk of suicide.

Holowka’s sister published a statement about Alec’s death asking that people give the family time to heal after their loss. Her account is now set to private.

In an eerie Facebook post made by Alec Holowka October 30, 2016, Alec seems to have predicted the circumstances of his own death. He discussed “cognitive distortion” and stated, “I believe that certain people in the indie game community want me dead.” He elaborated, saying that on a daily basis he lived with the fear “they are trying to covertly hurt me and my career to the point where I’m driven to suicide.”

Holowka said he had trouble attending conferences, knowing that these people who he believed wished to harm him would be at those events but had tried to engage in exposure therapy by forcing himself to attend. He doesn’t name any of the individuals who he felt held this animosity towards him and acknowledges that he was struggling with a psychological problem.

This brave, public admission certainly takes away from those who claim that Holowka was being enabled by others who refused to confront him. It is clear that Alec was confronting his own demons and barely getting through it. But he had sought out help and many say that he had started to improve over the last couple of years.

This new “cancel culture,” in which social media platforms are used to make a person unemployable and publicly execute their identities has created a toxic frenzy of pointed fingers. Those who participate have no valid claim to rationality. Meanwhile, people online are searching for answers and asking good questions about the timing of the allegations.