A handful of protestors showed up at a home of Amazon founder Jeff Bezos and chanted "make Amazon pay!" 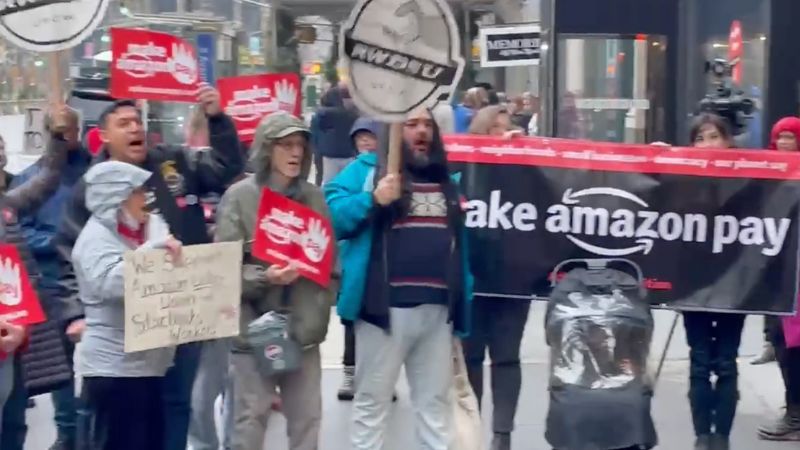 On Black Friday, the busiest shopping day of the year, Amazon workers in various countries, including the US, are walking away from their job and taking to the streets to say that they are underpaid by the company and demand better working conditions.

A handful of protestors showed up at one of the homes of Amazon founder Jeff Bezos and chanted "make Amazon pay!"


According to the New York Post, workers are expected to walk out on the job at Whole Foods locations as well, as the grocery store is owned by Amazon. The Black Friday protests are over wages and working conditions.

According to CNBC, "Warehouse and delivery workers will earn between $16 and $26 per hour depending on their position, Amazon added. Amazon’s minimum wage for employees in the U.S. remains $15 an hour."

CBS News reported that a report by the Strategic Organizing Center said, "Amazon employed one-third of all warehouse workers in the US, but it was responsible for nearly one-half (49 percent) of all injuries in the warehouse industry." Amazon denies the veracity of that statistic.

A Staten Island warehouse unionized earlier this year, an act that Amazon is seeking to undo. New York Congresswoman Alexandria Ocasio-Cortez promised she would stand with those workers at a protest but bailed on them at the last minute.


Eight warehouses were scheduled for protests organized by France’s SUD and CGT unions. Germany’s Ver.di union said it was time for the company to recognize labor unions and planned protests at 10 warehouses.

A German Amazon spokesperson said, "As an employer, Amazon offers great pay, benefits and development opportunities – all in an attractive and safe working environment."

In August, it was revealed that Amazon had laid off 100,000 workers from its overall workforce in a single financial quarter and coming as the company lost $2 billion net for the second quarter of 2022. The company has more than 1.5 million employees worldwide, although most of those are hourly workers.

In November it was reported the company was set to lay off another 10,000 workers in a move that would downsize the company's corporate employees by 3 percent.

Amazon workers have staged protests before, such as in June when employees staged a "die-in" protest to protest the sale of what they described as "transphobic books."
ADVERTISEMENT
ADVERTISEMENT
AmazonProtest