The group said in their speech "our anger is with Amazon using the raising of the Pride flag as a PR stunt." 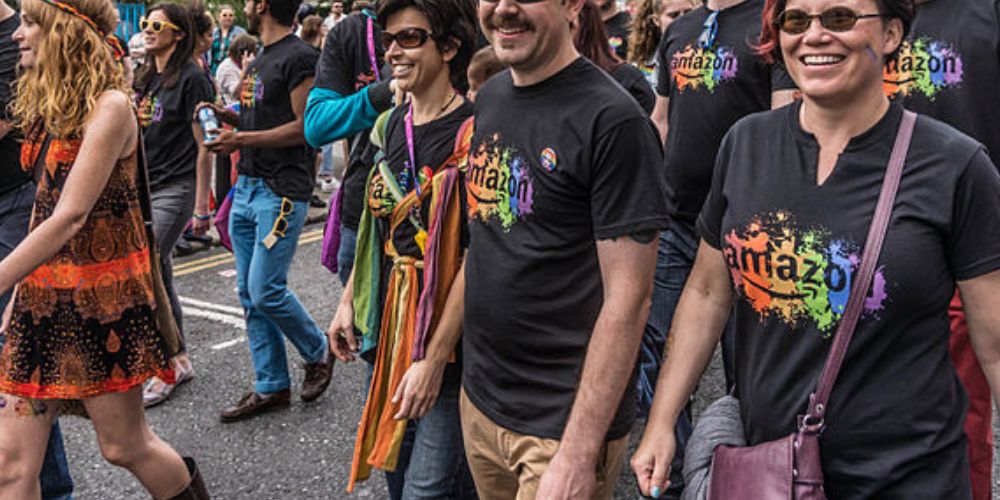 Amazon employees staged a "die-in" protest on Wednesday to protest the sale of what they describe as "transphobic books."

Around 30 workers affiliated with the group No Hate At Amazon staged the event during Amazon's annual "Glamazon Pride 2022 event" held at the company's South Lake Union campus in Seattle. The group said in their speech "our anger is with Amazon using the raising of the Pride flag as a PR stunt."

A photo of the "die-in" was posted by Business Insider reporter Katherine Long, which depicts employees laying on the ground pretending to be dead. Each is covered with trans flags.

The group said in their speech that the Glamazon event was "rainbow washing" the company's profits from "spreading a culture of hatred through the sale of transphobic books." They mention Abigail Shrier’s 2020 bestseller "Irreversible Damage" but centered the largest portion of their speech on Matt Walsh's "Johnny the Walrus."

No Hate At Amazon describes Walsh as "a serial abuser who has openly attacked our coworkers and our customers." Some of the harm they cite include "Johnny the Walrus" originally being labeled as an LGBTQ book.

They extend their concern to Walsh's recently released documentary "What is a Woman?" and the accompanying book for currently available for pre-order on Amazon.

The group made several demands of Amazon, which include terminating the sale of the books they deem transphobic, And they state for Amazon to be held accountable, they need to "establish an elected workers' oversight board which includes and collectively advocates for workers from marginalized communities and oppressed groups."

As the AboutAmazon website states, Amazon created the GLAmazon event in 2007 in conjunction with June's pride month. The event was rebranded "Glamazon" in 2017 to better emphasize the LGBTQIA letters.

No Hate At Amazon's protest and speech at this year's Glamazon culminated in their demanding that Amazon "stand up against fascist ideology and take action" because "you will need to take a stand eventually… How long will you wait, while our numbers grow?"